Will Future EVs Only Have a Five-Year Battery Life? 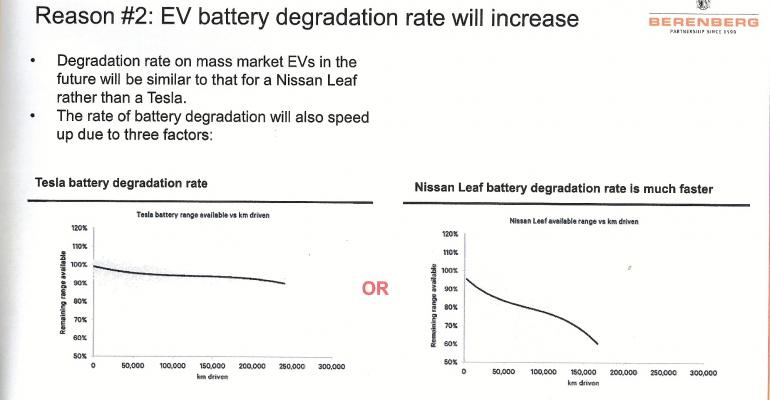 Many EV batteries may not last as long as consumers expect—especially if trends toward nickel-rich chemistries and fast-charging continue, an expert said at last week’s Battery Show.

Asad Farid of Berenberg Bank told engineers at the show that many of the newer breed of batteries will last, on average, only about five years. “We think the battery degradation rate in your electric car will increase rather than decrease going forward,” he said.

The shorter life expectancy will come as a surprise to those who believe all EV batteries will behave in a manner similar to that of Tesla Inc.’s big, actively cooled lithium-ion battery packs, Farid said. He predicted that many future batteries will exhibit the kind of “capacity fade” that Berenberg chronicled in early Nissan Leaf EVs. Those batteries exhibited more than 20% degradation after an average of five to six years of driving, he noted.

In a session titled, “Lithium-Ion Batteries Most Critical Raw Materials: Lithium, Cobalt, Nickel & Graphite,” Farid told the audience that many other factors also contribute to shorter battery life. Among those are depth of discharge and size (capacity) of the battery. Because drivers are more likely to deeply discharge a smaller battery, smaller packs on average will not last as long as the bigger ones, he predicted.

To be sure, consumers who purchase EVs would be covered if the batteries degrade as rapidly as Farid predicts. Today, most manufacturers offer warranties—typically for eight years and 100,000 miles. Moreover, some states are providing protection for consumers who buy used EVs. California, for example, recently passed a bill that would provide a rebate to buyers of used EVs to replace the battery packs in their vehicles.

Moreover, the industry is aware of the heat problems associated with fast charging and is prepared to deal with it, other analysts say. “OEMs understand the desire for fast charging and are actively working to mitigate the impact through things like careful thermal management to keep pack temperatures down,” noted Sam Abuelsamid, senior analyst for Navigant Research, in an e-mail to Design News. “On the e-tron, Audi is making a big deal about the thermal management of the battery pack to support 150-kW charging, and Porsche is launching 350-kW charging on the Taycan in the spring.”

Either way, Farid believes that most consumers will want to replace their batteries sooner than eight years. Such purchases would be more cost-effective than replacing the entire vehicle, he said. “EV car owners will be tempted to replace their battery pack after four to five years, rather than buying a new electric car,” he said. “And if you buy an electric car from Nissan, BMW, or Renault, you can replace the battery pack for around $8,000.”

If owners choose not to replace the battery, Farid said, they could lose as much as 70% of the car’s resale value within five years. “The only thing wrong with your car (at that point) is your battery pack,” he said. “So if you can replace it, you can significantly increase the value of your car.”