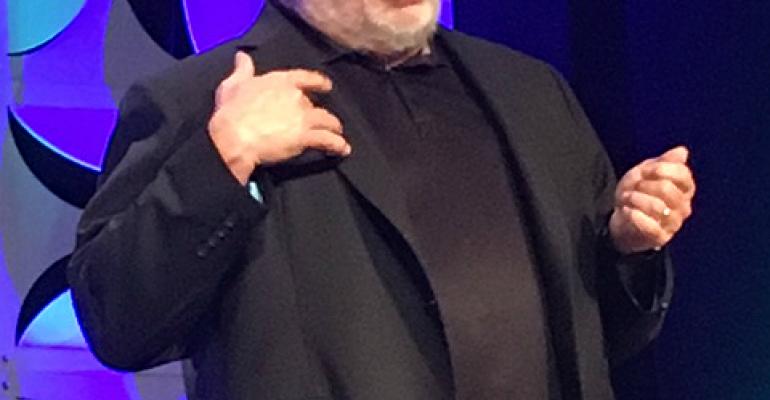 During a keynote at Atlantic Design & Manufacturing 2017, Apple co-founder Steve Wozniak shared his thoughts on open source, the Maker movement, and why engineers should build for themselves.

Steve Wozniak told the audience at Atlantic Design and Manufacturing 2017 he was too busy to watch Apple's Worldwide Developers Conference (WWDC) this year, although he has in recent years. “I only read about it after the fact,” he told his keynote audience. “In recent years the software has meant a lot more to me than the hardware advancements in terms in how we live our life,” he said, adding sobering remarks as to the latest hardware offerings from the company he co-founded. “I don't remember anything catching my attention particularly,” Wozniak said. “Apple's going to have this little home device [the iHome]...Well, I sleep next to my phone and go, 'Hey Siri, turn the lights on.' "

What does catch Wozniak's attention these days are trends like open source and the maker movement – both of which have grown from ideas and a spirit that he told the audience get right to the heart of why he helped start Apple in the first place. “In our first manual for the Apple II we put in every bit of my designs, software, and examples of other programs,” he said. “And everybody could pick it up and see how they could develop their own plug-in boards and software. It was very open source, and very favorable. A thousand companies started making accessories for the Apple II computer.”

Wozniak continued, “I love the maker movement because we started [Apple] with a demonstrable product,with a prototype that was working. I was not just an engineer, I did the whole thing – I brought up ideas, drafted them on paper, I sat down and plugged chips into boards, tested every single wire..”

A big thing Wozniak stressed to the audience was the importance of doing things for fun and for building things with yourself in mind rather than potential profits. “I've gone step by step in my life building things for fun, but each one of those was a step in my learning – my brain remembered the tricks I came up with to develop something and be proud of it and show it to other people.

“You might go to Maker Faire and you see these things and you might think. 'Who would want to buy that?' But the people making it are getting the skills that could change their job in the future.”

Wozniak said he often does his own DIY projects using Raspberry Pis and similar boards and he acknowledged that were he were coming up today he would no doubt be considered a maker. “I'm pretty sure that I would be with my little Arduino, Raspberry Pis, and $9 C.H.I.P computers, programming motors and making strange things under my control,” he said. “And hopefully I'd have enough brilliance in my software that the devices would start doing semi-intelligent things. I'd be out there just playing around. I never had an intention to start a company with anything I did ever in my life.”

Wozniak is fond of calling himself an “engineer's engineer,” a term grew out of his early years as an engineer for Hewlett Packard (HP) and seems to be at the core of his design philosophy. “An engineer's engineer sounds like, 'Oh, I'm a superior engineer,' No," he explained. “I was at Hewlett Packard designing products that engineers used. When you're an engineer's engineer, building products for other engineers, you know the market very well because these are products you would use yourself. You don't need a marketing person to tell you what it is you should build. I know what the want is and the need and the value. A lot of marketing at HP would come from the bottom, engineers ideas would percolate up and become the big products.”

This mindset, Wozniak said, is exactly what engineers should adopt when they're looking to innovate or create something that his co-founder Steve Jobs might have called “insanely great.” He told anecdotes about the iPhone being so innovative because Jobs was not a technical person and obsessed over every detail to make the smartphone as simple and intuitive as possible for himself. “I think about the Tesla Model X,” Wozniak said. “Why would anyone have ever built an electric car large? When you analyze cost of batteries and electricity it doesn't add up. Why did they do it? Elon Musk has a large family, that's why.”

For Wozniak, things like simplicity, usability, and elegance, all qualities shared by our favorite devices, all come from designers building for themselves first and foremost. “When you build something for yourself you've got a huge advantage over trying to imagine other people and what would they want or what would they buy. And you're doing it for the art, for something you would want to own, more than you're doing just it for money. That's where the greatest products come from.”