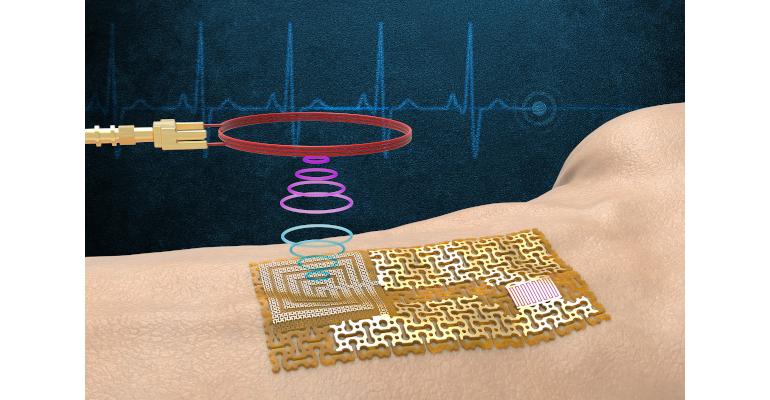 A sensing device that can be worn like a patch on a person’s skin senses and wirelessly transmits signals without the need for bulky chips or batteries.
The gallium nitride-based thin-film technology provides its own power as well as wireless transmission of data.

Researchers have taken wearable sensors to the next level with the development of a flexible, semiconducting film that can be worn as a type of e-skin for various sensing applications. MIT engineers developed the sensor, which is an ultrathin, high-quality film of gallium nitride that can communicate wirelessly without requiring batteries or chips because of the two-way piezoelectric properties of the material, they said.

Indeed, most wireless sensors today communicate via embedded Bluetooth chips that are themselves powered by small batteries. But as wearable technology and sensing devices are becoming more sophisticated and requiring smaller, thinner, and more flexible forms, conventional sensors may be too bulky for these applications.

The sensor developed by the MIT team can meet these needs, researchers said. It adheres to the skin like Scotch tape and has similar properties to typical sensing devices in a form-fitting form factor, said Jeehwan Kim, an associate professor of mechanical engineering and of materials science and engineering.

“Chips require a lot of power, but our device could make a system very light without having any chips that are power-hungry,” he explained in an article published by MIT News. “You could put it on your body like a bandage, and paired with a wireless reader on your cellphone, you could wirelessly monitor your pulse, sweat, and other biological signals.”

A previous technique developed by a research team led by Kim, who also is a principal investigator in MIT’s Research Laboratory of Electronics, is key to how the novel technology works. This technique, called remote epitaxy, can be used to quickly grow and peel away ultrathin, high-quality semiconductors from wafers coated with graphene.

The researchers used this technique to fabricate and explore various flexible, multifunctional electronic films, including one made with pure, single-crystalline samples of gallium nitride. The technology can be used as both a sensor and a wireless communicator of surface acoustic waves, or vibrations across the films. The patterns of these waves can indicate a person’s heart rate, or even more subtly, the presence of certain compounds on the skin, such as salt in sweat, researchers said.

Because of gallium nitride’s properties, the team surmised that such a thin-film sensor, when adhered to the skin, would have its own inherent, “resonant” vibration or frequency that the piezoelectric material could simultaneously convert into an electrical signal.

A wireless receiver then could register this frequency so that any changes to the condition of the skin—such as a rising heart rate—would affect the mechanical vibrations of the sensor, sending an an electrical signal to the receiver.

“If there is any change in the pulse, or chemicals in sweat, or even ultraviolet exposure to skin, all of this activity can change the pattern of surface acoustic waves on the gallium nitride film,” observed Yeongin Kim, former MIT postdoc and now assistant professor at the University of Cincinnati, in the article. “And the sensitivity of our film is so high that it can detect these changes.”

To test their idea, the researchers produced a thin film of pure, high-quality gallium nitride paired with a layer of gold—deposited in a pattern of repeating dumbbells that gave flexibility to the typically rigid metal—to boost the electrical signal. The gallium nitride and gold thin film they developed measure only 250 nanometers thick, which is about 100 times thinner than the width of a human hair.

Volunteers wore this e-skin on their wrists and necks and used a simple antenna that was being held nearby to register the device’s frequency wirelessly. These tests found that the device was able to sense and wirelessly transmit changes in the surface acoustic waves of the gallium nitride on volunteers’ skin in relation to their heart rate, researchers said.

The team also paired the device with a thin ion-sensing membrane—a material that selectively attracts a target ion, which in this case was sodium. With this enhancement, the device could sense and wirelessly transmit changing sodium levels as a volunteer held onto a heating pad and began to sweat, researchers said.

The positive test results represent a first step toward chip-free wireless sensors that eventually, when paired with other selective membranes, can be used to monitor different vital biomarkers, researchers said. Aside from sodium, these biomarkers also can include glucose, or cortisol related to stress levels, they said.