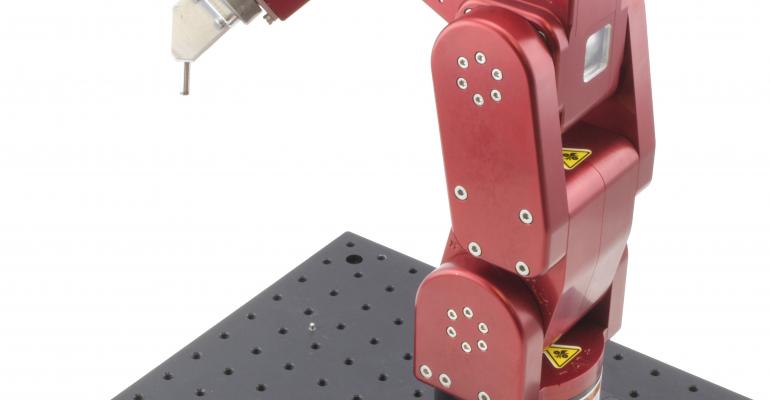 The Meca500 is said to be the world’s smallest and most precise six-axis industrial robot arm.

A miniature six-axis robot arm – so small it can be carried in a briefcase – will be on display at this week’s Medical Design & Manufacturing Show in Anaheim.

The Meca500, said to be the world’s smallest and most precise six-axis industrial robot arm, weighs a scant 5 kg (11 lbs) and can move payloads of up to 1 lb. Mecademic Inc., maker of the robot arm, is targeting it at precision assembly, testing and inspection, pick and place, and even microsurgery.

“It’s for applications that need a small footprint robot that won’t get in the way,” noted Richard Dunaj, sales engineer for Maxon Precision Motors, which supplies the DC brushless flat motors employed in the robot arm. “But what’s important is how much it can lift and how fast it can move the load.”

Maxon will demonstrate the robot arm at its booth at the show. There, the robot will be programmed to perform a series of different tasks and attendees will also be allowed to access it via a computer.

Dunaj said that one of the keys to the robot’s small size and high payload capacity is use of the flat brushless motors. The EC series motors range in size from 9-90 mm in diameter, weigh between 30-70 g, and offer high torque, he said. “The smaller the motor, the bigger the advantage,” Dunaj told Design News. “If you have a lightweight actuator, it allows you to use an end effector that’s heavier.”

Another key to the robot arm design is the incorporation of the controller in its base. The use on an on-board controller means that no separate cabinet or cables are needed. The resulting compactness makes it a candidate for use in CNC machines and on assembly lines where space is at a premium.

“It make sense for a lot of applications,” Dunaj said.

Maxon added that it will also feature hands-on seminars at the show for attendees who are interested in learning about its industrial controllers.