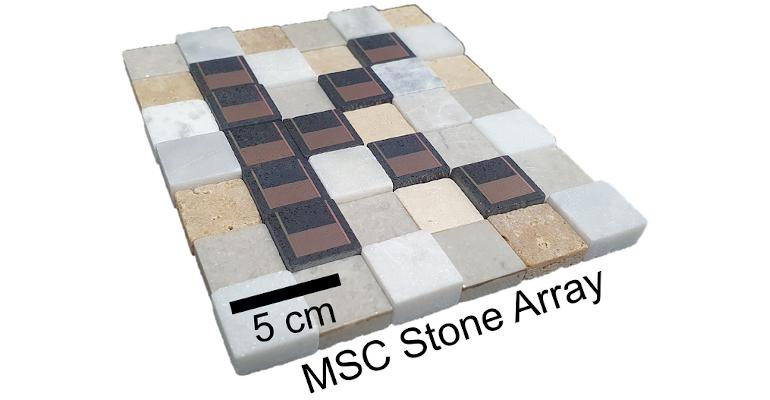 Researchers have come up with a new twist in technology for smart homes by integrating micro-supercapacitors on top of stone tiles, paving the way for energy-storage components to be built directly into ecologically friendly construction materials.

Scientists from Kookmin University and Kumoh National Institute of Technology in South Korea fabricated micro-supercapacitors onto the surface of the tiles, which can be used to build countertops, floors, or other home features. Micro-supercapacitors are like batteries except they can charge and discharge more quickly as well as provide optimum power supply storage.

This innovation can provide customizable power supplies for smart thermostats, speakers, and lights to create new energy efficiencies built directly into green construction materials, they reported in a paper on their work in the journal ACS Nano.

Stones, such as marble and granite, are natural materials that already are widely used in the construction or renovation of houses. By leveraging these materials as power sources, surfaces found in every home can be used to charge small electronics, alleviating some of the dependency on the electrical grid, researchers said.

It isn’t straightforward to integrate electronic components into these materials, however. Researchers had some navigating to do. That’s because the stones, even those that are polished and seem smooth, have microscopic bumps and irregularities that make it difficult to adhere electrical components to them, they said.

The team had previously devised a way to place micro-supercapacitors onto irregular surfaces with lasers and adapted this approach to building the devices on marble.

To adapt the method, researchers patterned a copper oxide nanoparticle solution on a marble tile into two comb-like sides with interspersed prongs, they explained. By pointing a near-infrared laser on the nanoparticles, they produced pure, porous copper electrodes that showed high conductivity and attached to the stone’s surface, they said.

To form the micro-supercapacitor, researchers then deposited iron oxide onto one of the electrodes to create a cathode, and manganese oxide on the other to create an anode. Connecting the electrodes is a lithium perchlorate and polymer solution acting as the electrolyte.

In lab tests, the device maintained a high energy storage capacity even after 4,000 charge-discharge cycles, researchers reported. The micro-supercapacitors also proved durable against harsh impacts that can occur on home surfaces, and they can be recycled quickly, they added.

By stringing together multiple devices in a three-by-three array, researchers generated enough energy to light an LED, showing promise to provide energy for other devices in the home, they said.