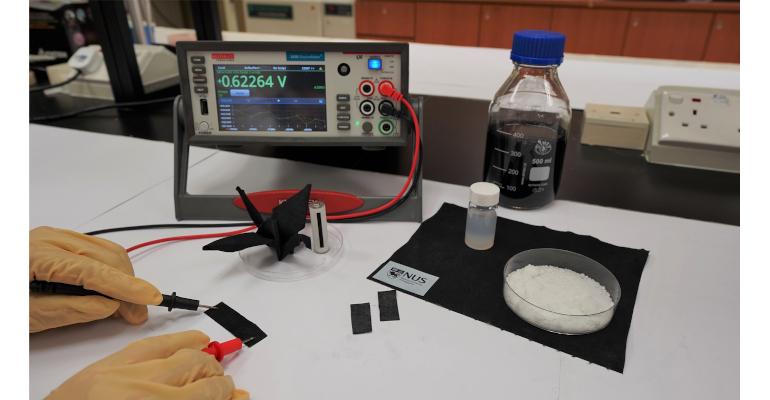 The new moisture-driven electricity generation device invented by NUS researchers capitalizes on the difference in moisture content of the wet and dry regions of the carbon-coated fabric to create an electric current that can power small devices.
Moisture drives enough power to provide electricity for wearables or portable electronics thanks to this energy-harvesting device.

Researchers have developed a new energy-harvesting device capable of taking energy from moisture in the air to provide enough power for wearable health monitors or sensors. A team from National University of Singapore’s (NUS) College of Design and Engineering (CDE) has developed the moisture-driven electricity generation (MEG) device, which is composed of a thin layer of fabric about 0.3 millimeters in thickness and comprised of sea salt, carbon ink, and a special water-absorbing gel.

With wearable health-monitoring and other devices becoming more widely used, researchers have been searching for user-friendly ways to power them beyond bulky batteries and wires that don't fit the demand for small and light form factors.

The idea behind MEG devices is to use different materials to generate electricity from their interaction with moisture in the air. Their promise, if realized, is that they can provide a lightweight and nox-toxic battery that's as thin as paper to power small wearables, researchers said.

However, developing these devices isn't without their challenges, including the potential for water saturation when they are exposed to ambient humidity and their limited electrical performance. So far, these challenges have made conventional MEG devices insufficient for the needs of wearable devices and haven't proven a sustainable solution.

The NUS research team aimed to overcome these challenges with the design of a MEG device that includes two parts with different properties that can maintain a difference in water content across them to generate electricity and allow for electrical output for hundreds of hours, they said.

The MEG device that the team developed consists of a thin layer of fabric—in this case, a commercially available material composed of wood pulp and polyester—which was coated with carbon nanoparticles.

They coated one area of the fabric with a hygroscopic ionic hydrogel, which they deemed the "wet "region. The water-absorbing gel was made with sea salt and can absorb more than six times its original weight; this is what the MEG uses to harvest moisture from the air, researchers said.

“Sea salt was chosen as the water-absorbing compound due to its non-toxic properties and its potential to provide a sustainable option for desalination plants to dispose of the generated sea salt and brine,” explained NUS Assistant Professor Tan Swee Ching, who led the research.

The other end of the fabric is the dry region that was not coated with the gel so it does not get wet, confining water to the other part of the fabric, researchers said.

The MEG generates electricity as the wet region absorbs water, a reaction that separates the ions of sea salt. The carbon nanoparticles, which are negatively charged, absorb free ions with a positive charge, or cations. This causes changes to the surface of the fabric, generating an electrical field across it. The fabric also can store electricity for later use, researchers said.

The wet/dry set-up solved the issue of saturation that can occur with a MEG because the device could maintain high water content in the wet region and low moisture in the dry region, researchers said. In this way, the MEG can sustain electrical output even when the wet region is saturated with water.

To test the device, researchers left it in an open humid environment for 30 days, and they found that the wet region still had most of the water, demonstrating the effectiveness of the device, researchers said. After water absorption, one piece of power-generating fabric 1.5 by 2 centimeters in size can provide up to 0.7 volts (V) of electricity for more than150 hours in a constant environment, they said. This result "significantly improved" electrical output compared to other MEG technologies, "thus making it possible to power many common electronic devices, such as health monitors and wearable electronics,” Tan explained.

The device also showed flexibility and could withstand stress from twisting, rolling, and bending. In fact, researchers even folded the device into an origami crane to prove this aspect, which they said did not affect its overall electrical performance.

The device has numerous applications, including use as a portable power source for small electronics, including wearables. In fact, researchers tested some of the use cases for the MEG device by connecting three pieces of the power-generating fabric together and placing them into a 3D-printed case that was the size of a standard AA battery.

What they found was the voltage of the assembled device reached as high as 1.96V, which is higher than a commercial AA battery of about 1.5V. This provided enough energy for small electronic devices, such as an alarm clock.

The device also can be fabricated at a low cost of about S$0.15 per square meter, which makes it suitable for mass production. To this end, researchers have filed a patent for the technology to explore future commercialization strategies, they said.