Nickel May Be Limiting Material 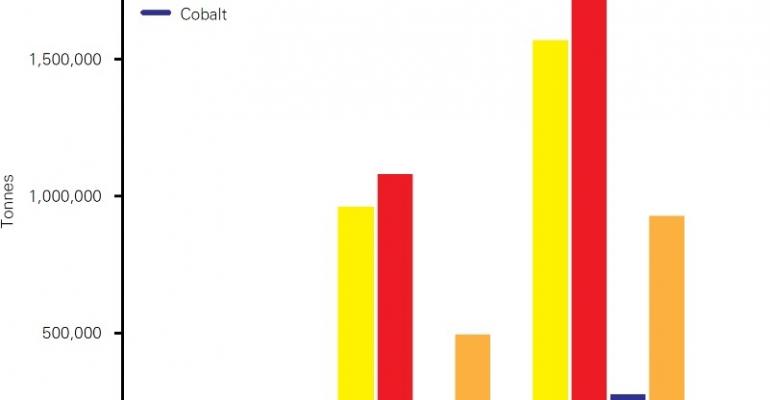 The worldwide production of nickel will need to increase if it is to keep up with the demand for the metal created by new EVs.

Supplying raw materials for the increasing volumes of electric vehicles (EVs) produced worldwide is a source of growing concern among battery and vehicle manufacturers.  It should be no surprise that one primary worry is the volatility in availability of the lithium that is used in lithium ion batteries. Although the supply chains for mining and processing the material are somewhat convoluted, the general sense among industry experts is that there is presently an oversupply of lithium, which will act, over the short term, to keep prices stable, if not pushing them into a decline. According to a recent report from Bloomberg, however, the same cannot be said for nickel.

Nickel is an amazing useful material. The metal is both corrosion resistant and a good electrical conductor, particularly when mixed with copper. Nickel has excellent high temperature resistance which come into play in applications that include jet engines and gas turbines. In lithium ion batteries, nickel metal is often used as the electrical conductor between cells. It is also one of the primary ingredients in a lithium ion battery cathode (positive electrode).

A rechargeable lithium ion battery consists of two electrodes that are immersed in an electrolyte solution and that are separated by a permeable polymer membrane. When the battery is being charged, the lithium ions pass from the positive cathode electrode, through the polymer membrane, to the negative anode electrode. During discharging, the lithium ions travel back from the anode to the cathode, in the process giving up electrons to the anode which travel via an external circuit to power an electronic device before returning via the circuit to the cathode.

Carbon graphite is the most common anode electrode material as it has an ordered layered structure that can accommodate and store the small lithium ions between its layers. Because the working voltage of a battery is determined by the difference in electrochemical potential between the cathode and the anode, the cathode must be another material than graphite, and the choice of this material controls most of the performance characteristics of the lithium ion battery. That’s where nickel, or at least its oxide, comes into the picture.

Nickel’s Use in Cathodes

Nickel is used to create an intercalation structure for the battery cathode. But, if you remove significant amounts of lithium out of a nickel-oxide structure, it will release large amounts of oxygen, which can be a fire hazard. Other oxides must be added to help create stability. Aluminum, which likes to hold onto oxygen, can be added to the structure for example to reduce the hazard. It stabilizes the structure, but it lowers the capacity of the cell by a small amount. Cobalt is also frequently added to the cathode material to help stabilize the structure, but is costly and is sourced from the Democratic Republic of the Congo, a region of significant political instability. The cells developed by Panasonic and Tesla for its vehicles have so-called NCA chemistry, Nickel-Cobalt-Aluminum. Others use manganese and/or iron to help stabilize the structure, but the central ingredient in current commercial lithium ion battery cathodes is nickel.

Supply of the high-purity material used in batteries, known as class-one nickel, faces some real concerns—demand is likely to outstrip supply within five years, primarily due to increasing demand in the EV industry, according to Bloomberg (BNEF). Demand from lithium-ion batteries is forecast to increase by a factor of about 16 times to 1.8 million tons of contained metal by 2030, according to a BNEF July report. From the Bloomberg report, “Batteries will account for more than half of demand for class one nickel by that date, shifting a market that’s currently focused on stainless steel.”

Nickel is not a particularly scarce metal and is often found in the same locations as copper deposits. Mining nickel tends to be environmentally concerning as it involves leaching of the metal from ores using strong acids. These environmental concerns have held up the opening of a copper and nickel mine adjacent to the environmentally sensitive Boundary Waters Canoe Area (BWCA) in Northern Minnesota, for example.

Nickel prices in London have increased by more than a third thus far in 2019 and in July reached the highest level in more than a year. It is expected that increasing future battery demand will continue to push prices higher.

Nickel producers are responding with more output. According to Bloomberg, “Perth-based Independence last year increased nickel output from its Nova mine in Western Australia by about a quarter and is spending as much as A$75 million ($51 million) on exploration in an effort to extend the asset’s life and find new deposits.”

In June, Japan’s Sumitomo Metal Mining Co., said the nickel market faces a deficit of 51,000 tons in 2019, raising an earlier forecast. Bloomberg reports that last month, First Quantum Minerals Ltd. Confirmed that it will reopen its Ravensthorpe mine in Western Australia in the first quarter of 2020 amid the strength of interest from potential nickel and cobalt customers. The mine was closed in a soft market for nickel in 2017.

As with lithium and cobalt, two other materials whose supply seems at times precarious, the increasing demand for nickel from battery makers will depend almost entirely on how quickly the EV market grows. In the US, the demand for EVs is only just starting to register on the automotive market, while in places like China, Canada, and some parts of Europe (Norway), electric vehicles are showing substantial growth. Whether nickel producers can keep up with the growing demand could be just one more stumbling block in the inevitable path to electrification of transportation.

Raw materials supply will be among the topics at the The Battery Show and Electric & Hybrid Vehicle Technology Expo 2019 conference that will take place in Novi, Michigan on September 10-12, 2019. Four days, eight tracks, and over 80 sessions, curated by industry experts will bring battery and electric vehicle technologies into clear focus.