Underneath all the costumes and fandom, conventions like the Silicon Valley Comic Con are inspiring a new generation of young women in STEM.

Move over Iron "Man," the next generation of super engineers is looking a lot more gender balanced.

Walking around the inaugural Silicon Valley Comic Con 2016, this reporter spotted dozens of Iron Girls, Bat Girls, Ghostbuster Girls, and every other iteration of superhero in female form.

The girl geekification of the sci-fi space is a huge leap forward for those advocating more women in STEM (Science, Technology, Engineering, and Math).

Cadence Kraft, a middle schooler attending Silicon Valley Comic Con as her favorite Marvel hero, Iron Man, said she left her hair loose on purpose so people could tell she was a girl, despite the costume. An avid fan of the movies and comics, girls like Cadence represent a new generation who don't shy away from combining a love of science with pop culture, in a sphere that was long thought to be a boys' domain.

Click the image below to see a slideshow of some of our favorite costumes from Silicon Valley Comic Con 2016.

Who's your favorite superhero, STEM-related or otherwise? Let us know in the comments! 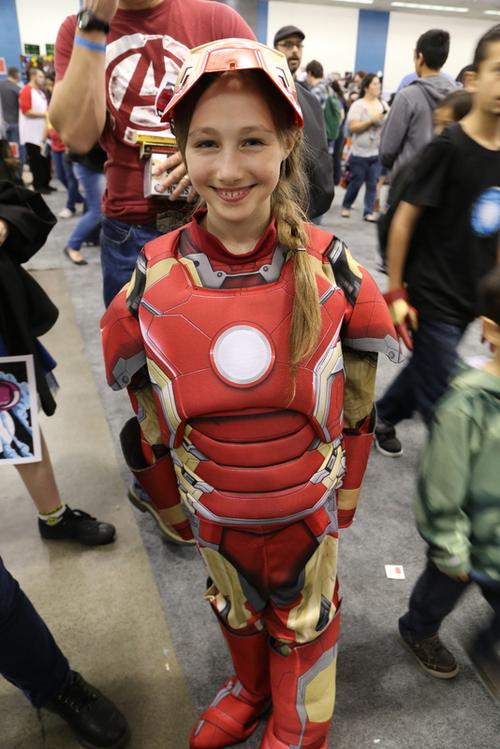 Attendee Cadence Kraft said she deliberately wore her hair down so people would know she was a girl in her costume.

Science fiction and tech have long gone hand in hand, each borrowing from and pushing the other's limits. Though comics may seem childish to some, to others they spark scientific inspiration.

Carl Sagan, the renowned American astronomer, cosmologist, astrophysicist, astrobiologist, and famous sci-fi author, once quipped, "Imagination will often carry us to worlds that never were. But without it we go nowhere."

Indeed, the Alcubierre drive or Alcubierre warp drive -- a speculative idea based on a solution of Einstein's field equations in general relativity -- by which a spacecraft could achieve apparent faster-than-light travel was inspired by Star Trek.

Theoretical physicist Miguel Alcubierre even wrote an email to William Shatner to tell him his theory was directly inspired by the warp drive used in the show, and references Star Trek in his 1994 paper. Children, by default, are creative, imaginative, curious, and love a good story. It stands to reason, then, that as comic books begin to appeal to both genders, STEM will win by attracting far more diverse devotees. And that can only be a good thing.