HomeIndustryMedicalMechatronics Propels New Medtech Designs in Prosthesis, Surgery, and Mobility
Recent
Industry
Using Low-Code/No-Code Systems for Manufacturing Quality
May 19, 2022
Los Angeles Fire Department Deploys Nation’s First Electric Fire Truck
May 19, 2022
Supplier News Looks at an Automated Coolant Management System
May 19, 2022
Is Magneto the Hero We Need to Destroy Blood Clots?
May 19, 2022
POLL
Using AI To Help the Deaf Communicate
May 19, 2022
Argo AI Expands Driverless Operation to Austin and Miami in Search of More Challenges
May 18, 2022
12 Ideas that Could Change the World
May 18, 2022
Making the AC Power Main Intelligent
May 18, 2022

Lifelike prostheses, better non-invasive surgery tools, and a more nimble wheelchair are just a few examples of which the multidisciplinary field of mechatronics is helping medical device makers make life better for patients.

Mechatronics basically combines mechanical and electrical engineering and controls but also can involve other aspects of engineering such as sensing and computing. The medical device industry is widely applying mechatronics, and it is helping to change the way practitioners provide devices and patients function through them.

The system-integrated approach to design is what makes it possible to yield medtech innovations. Prosthesis is a particularly active area, with a number of notable new artificial limb designs that are more lifelike than ever.

Mechatronics lends itself well to this field because of the complexity of designing prostheses that can make sophisticated movements, said Courtney Medynski, product development manager at Steeper, a company in Leeds, England, producing bionic hands. The company’s latest innovation is “bebionic,” a prosthetic hand that it says offers unprecedented movement and is now being used in the UK. 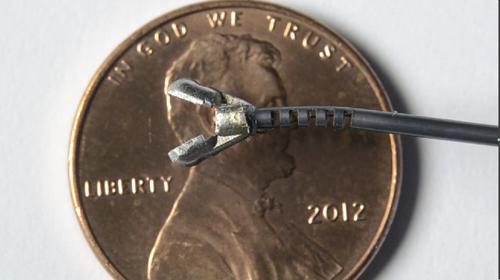 The interactions between neural, mechanical, and sensory systems required to perform a task as simple as picking up a ball are complex. To create a prosthetic hand capable of natural movement such as bebionic, it is necessary to mimic sophisticated natural systems, as well as the intricate interactions between them, Medynski said, by using cutting-edge actuators, sensors, micro¬processors, and embedded control software. “True anatomical form and measurements are crucial in developing a realistic and functional end product.”

The bebionic device has ergonomic features that make it unlike any other hand available, Medynski said.

Indeed, the first person to receive the hand in the UK -- Nicky Ashwell, a 29-year-old woman in London who was born without a right hand— has been able to open her purse and use a fork and knife properly for the first time in her life thanks to the prosthesis.

“With individual motors driving each digit, the hand provides a more natural and secure grip to its users,” Medynski explained. “There are 14 selectable grip patterns to enable the user to carry out everyday activities with ease.”

Microprocessors that allow for proportional speed control enables the precise and delicate manipulation needed for tasks such as picking up an egg or threading a needle, she said. The prosthetic hand also incorporates a function that senses when a gripped object is slipping and adjusts the grip accordingly to secure it.

DEKA Innovative Solutions Corp., the New Hampshire-based firm led by Dean Kamen, best known for his invention of the Segway, also developed a next-generation prosthetic limb that can move very similar to its normal human counterpart.

The Defense Advanced Research Projects Agency (DARPA) recently awarded a nearly $7 million contract to DEKA, on top of the $40 million it had already given the company, to continue development of the so-called “Luke Arm.” The device is nicknamed after the robotic arm given to the character Luke Skywalker in the “Star Wars” film series. The prosthesis’ official name is the DEKA Arm System.

The DEKA Arm System works through actuation controlled by electrical signals from electromyogram electrodes. They are converted into 10 movements of the arm, which is the same shape and weight as an adult arm. Movement sensors and force sensors also are behind the prosthesis’ movement capabilities.

Prosthetic devices aren’t the only area where mechatronics is improving medtech design. Surgeons are reaping the benefits from the discipline, which is allowing engineers to build better tools for surgeries requiring delicate or intricate work.

A team of engineers at Vanderbilt University invented a tiny mechanical wrist that can be used to perform movements of the utmost dexterity in needlescopic surgery procedures.

The wrist is part of a long-term project to build a robotic system for removing brain tumors through the nose, said Robert Webster, the project leader and associate professor of mechanical engineering at the university.

“The robot has needle-size manipulators that can bend and elongate like tentacles,” he said. “The wrist, itself, is a more recent development to add dexterity at the tip of the device… While it was inspired by the larger project in transnasal surgery, we believe the wrist will also be useful in the future in a variety of different robots and even non-robotic handheld tools.”

The tool is called a “wrist” because it allows for the same types of movements as a human wrist — such as bending and changing the direction of the hand — but in very tight spaces, Webster said. This inherently allows surgeons to perform their work with small incisions or in small cavities like the nose, making surgery less invasive.

“One of the big challenges in needlescopic surgery is that the tools are rigid and there is no way to reposition the instrument at the tool tip without angling the entire device,” he said. “Sometimes, the surgeon does not have room inside the body to tilt the entire device to get at the piece of anatomy he or she wants to operate on.”