HomeIndustryMedicalBonding Tapes or Liquid Adhesives? It's a Question of Process and Performance
Recent
Industry
Novel 3D Printing Method Used to Replenish Coral Reefs
May 16, 2022
Volkswagen’s Electric Successor to the International Scout 4x4
May 16, 2022
The Music Is Over For Apple's iPod
May 16, 2022
Q&A With IndyCar Gearbox Expert Anna Chatten
May 13, 2022
POLL
Intel Unveils Trust Authority to Boost Security
May 13, 2022
Supplier News Looks at Highly Customizable Industrial Monitors
May 12, 2022
Here Technologies Maps are Key to Mercedes Level 3 Automation
May 12, 2022
'We Built the Domino's Pizza Tracker for Manufacturing'
May 12, 2022

Bonding Tapes or Liquid Adhesives? It's a Question of Process and Performance

Why would you use bonding tapes instead of liquid adhesives in your assembly? Here are some guidelines for answering that question.

Like liquid adhesives, bonding tapes are often used to replace fasteners for joining structural and non-structural parts, to reduce costs, weight, and corrosion problems. Tapes have several advantages over liquids, including the fact that they can be bonded to both low-surface-energy (LSE) and high-surface-energy (HSE) substrates. They can also be cut exactly to fit the dimensions of a part, and used for fixturing an assembly.

When choosing between liquid adhesives and bonding tapes, the decision-making process can get a bit complicated. Both types are highly versatile and can do a lot of the same jobs, so in many assemblies either will work, said Dave Herington, sales and marketing manager for adhesives and tapes in 3M Industrial Adhesives and Tapes. Sorting out the advantages of each for a given application starts with looking at the two main types of differences: process and performance. 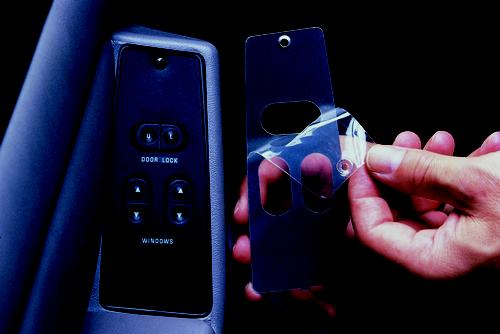 Here a double-sided tape with 3M's 200MP High Performance Acrylic Adhesive bonds a graphic cover onto interior automotive controls. This adhesive tape has excellent adhesion to metals and high-surface-energy plastics, such as those found in both automotive and aerospace applications. It performs well after exposure to humidity and hot/cold cycles, has good shear strength, and resists solvents.
(Source: 3M)

"It's less often about using one or the other for assemblies in a particular industry," said Herington. "It's more about differences in the assembly process, how those parts are to be joined, what materials you're using, whether or not the process is automated, and how much time it will take. For performance differences, that means the end-use performance of the part: its strength, weatherability, durability, and flexibility."

For example, when considering process differences, tapes appear easier to use. Most are pressure-sensitive. They aren't messy or gooey, they don't typically need an applicator, they don't have to be mixed or metered, and you don't have to wait for them to cure: just peel, stick, and apply pressure. Tapes come with a variety of different chemistries of adhesives, such as acrylic, hot melt, and different rubbers. There are also different carrier configurations, such as transfer tapes, which are a thin film of adhesives on a liner; double-sided-tapes, with the liner in between two film layers; and foam tapes of various thicknesses, which can be very durable.

Another process advantage for tapes is their immediate holding strength. They can be pre-applied to one substrate and then staged before that piece is joined to a different substrate. "But sometimes while you're joining two pieces, you need the ability to move one of the pieces of the assembly around to get it into place," said Herington. "Adhesives are more positionable in this situation because they don't cure immediately. Sometimes they can also be faster to apply: for example, applying a bead of adhesive on a long part, versus applying a long tape onto that part and getting it positioned exactly." 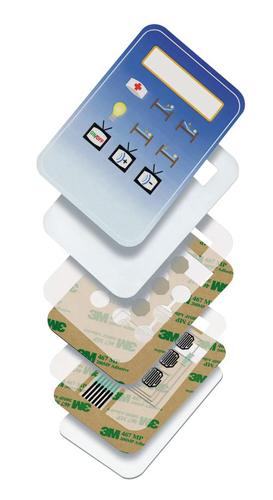 A different version of 3M's 200MP High Performance Acrylic Adhesive in a double-sided tape is used as spacers in a membrane switch, such as the push-button pads on large household appliances, or on gas station pumps. The tape bonds the switch's layers together, and holds up over time to repeated switch actuation without separation of the adhesive bond.
(Source: 3M)

Adhesives can also be easier to automate, since there's no liner to remove or pressure to apply. It's more about whether you're using extrusion or spray automation processes, said Herington. "Overall, the choice between liquid adhesive and bonding tape depends on process, speed, productivity, fixture, assembly, and positioning."

Add to that the second major variable to consider: the end-use part's performance during usage. Tapes provide a uniform thickness and a clean line, plus a wide range of strength profiles and compatibility with multiple substrates. Some have very high elongation and energy absorption qualities, but most tapes just don't perform at the same level of an adhesive at ultimate strength. Since that ultimate strength depends on the application, in many applications tapes can replace welds and other types of joining.

But in many structural applications tapes can't replace welds, even though some pressure-sensitive adhesives can be very strong. "Often, if an application is consistently load-bearing you lean toward a more structural bonding solution," said Herington. "It's important to understand the definition of structural, since the adhesive you choose has to be stronger than the substrate it's bonding to. We define structural as 1,000 psi of overlap shear strength."

Normally, the use of structural bonding tapes requires an external force to be applied to make them stick, commonly heat curing or UV (ultraviolet). Some structural bonding tapes do contain higher-strength adhesives, but those can get expensive. There are also hybrid pressure-sensitive adhesives that contain two-part curing chemistries, but those are extremely expensive, said Herington.

The performance advantages of adhesives over tapes can be summed up as a wider range of strengths, plus their curing chemistries can attain higher performance than most tapes for structural applications. Tapes are also limited in how thick they can get so they're not as good as liquids for gap filling.

Customers of Fabrico's services typically want to replace fasteners, said its director of marketing Craig McClenachan. Fabrico provides materials converting and manufacturing services for many applications in industries such as medical, transportation, aerospace/defense, electronics and renewable energy. That includes converting and finishing tapes.

The company supplies adhesive tapes for several different manufacturing processes, for both bonding and joining. These can be single-coated or double-coated tape. Double-coated types can be used to laminate materials together, or to attach die-cut products to other substrates. "Die-cuts and tapes are used when you're looking for a material that can be cut to exact dimensions, one that may be used for fixturing, or maybe for tough-to-bond-to materials," said McClenachan.

Compared to liquid adhesives, tapes can be bonded to a wide variety of substrates. They also come in a broad variety of thicknesses and adhesive chemistries. "With die-cut adhesives, you can configure them to the exact dimensions of the part you want to adhere to," said McClenachan. "Some tapes can also be repositioned to get the right fit. You can't do that with liquid adhesives."

This 3M Double Coated Tape 9731 has already been applied to a silicone substrate, which is being die-cut into gaskets. It could also be used for cushioning or padding. This pressure-sensitive tape is coated on one side with silicone-based adhesive, and on the other with acrylic-based adhesive. It provides excellent solvent resistance and adhesion to low-surface-energy materials such as silicone and plastics without the need for primer.
(Source: 3M)

Although both liquid adhesives and bonding tapes can do many similar jobs, some are better suited to solving problems that arise in assemblies for specific industries. Especially in automotive and aerospace, for example, a major adhesion challenge is sticking to LSE substrate materials, such as bonding to carbon composites, molded silicones, ultra-high molecular weight films, and to plastics like PS (polystyrene), PE (polyethylene), and PVA (polyvinyl acetate). In addition, new bonding tapes and adhesives are being developed to adhere to different types of hardcoats, as automotive manufacturers have been changing paint and e-coat formulations.

There are several double-sided adhesive tapes for use specifically in aerospace, as well as a large number of transportation adhesives for stopping squeak and rattle in cars, attaching trim pieces on exteriors of cars, and adhering to LSE plastics inside the cabin, said McClenachan.

Double-sided tapes with 3M's 200MP High Performance Acrylic Adhesive, for example, have especially good adhesion to metal and HSE plastics of the type found in both automotive and aerospace. When bonding, they also allow initial repositioning for placement accuracy. Aerospace is probably the most cutting-edge industry for use of structural bonding tapes, yet it's also where many of the more common pressure-sensitive adhesives are found, said Herington.

Performance tapes from Avery Dennison include pressure-sensitive tapes targeting automotive assemblies such as brake shims. The company's adhesive chemistries are tailored to bonding a variety of materials and substrates used in automotive production, for example, foam, steel, and PPE (polyphenyl ether). It also makes custom-engineered, flame-retardant adhesives and bonding tapes aimed at aerospace for extreme temperatures and a wide variety of materials and substrates.