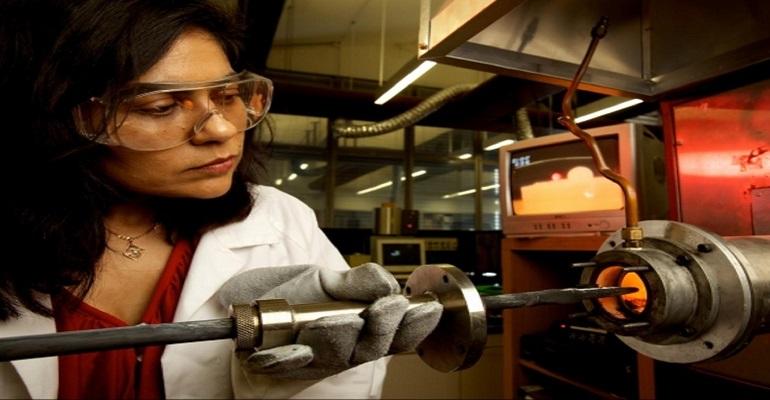 A new process developed by research led by Professor Veena Sahajwalla at the University of New South Wales creates a micro-factory that safely transforms toxic e-waste by mining some of the valuable materials contained in them.
Micro-factory approach takes precious metals and other materials from e-waste and helps mitigate negative environmental and health effects.

The frequency with which people have replaced old electronics with new ones in the past two decades or so has led to a global problem of e-waste, or toxic trash, created from discarded technology.

Now researchers in Australia have come up with a process that can be established in local communities to allows materials from e-waste to be reused and recycled.

The process, developed by research led by Professor Veena Sahajwalla at the University of New South Wales, basically creates a micro-factory that safely transforms toxic e-waste by mining some of the valuable materials contained in them, she said.

“We’ve developed a throwaway mentality, and the rapid technological advancement creates more generation of problematic e-waste,” Sahajwalla told Design News. “That would be fine if we had unlimited resources and unlimited space for disposal – but we don’t.”

Materials that can be recovered from e-waste include base metals like copper, rare earth oxides, plastics, and glass, which she and her team hope to remove and use to create “valuable, new materials,” Sahajwalla told us.

The process researchers created also could overcome the challenges of toxicity associated with the materials as well as the high costs of conventional industrial-scale recycling of e-waste, she said. For instance, a circuit board made of epoxy could contain glass fibers, which are difficult to recycle, Sahajwalla told Design News.

Cleaning Up the Process

“Currently, most of this waste is shipped to the developing countries for processing,” she told us. “In fact, conventional e-waste recycling approach is based on centralized large-scale operations which require significant capital expenditure, massive collection of the same types of materials, and long-distance transportation.”

This process has created a major environmental and public-health problem, as a significant proportion of problematic e-waste is currently landfilled, stockpiled, or illegally exported to developing nations, “where informal processing exposes marginalized communities to serious risks of contamination,” Sahajwalla told us.

“The problems associated with discarded hazardous e-waste, and its health and environmental impacts on marginal and disadvantaged communities, have become a critical global issue,” she said.

The solution Sahajwalla and her team invented has the potential to create a safe, low-cost recycling solution for e-waste that would enable every local community to take old devices being stored in their drawers or sheds and transform them into valuable metal alloys, she said.

The technique uses “judicious selection” of temperature and time for the various waste products, which is key to enabling the multiple reactions needed to produce and regenerate metal alloys, ceramics, and other materials, Sahajwalla told Design News.

“My research seeks to understand how the many components of e-waste behave, and how the reactions triggered by controlled heat can be beneficially employed,” she told us. “Several micromechanisms in micro recycling deliver innovative solutions for the ubiquitous, high-volume, and potentially toxic waste and opens alternative pathways for the recovery of valuable materials from waste.”

The micro-factories use a pre-programmed drone to identify the PCBs from within crushed e-waste, and a simple robot to extract them, protecting a human from being contaminated by anything during the process, she explained. The PCBs are then fed into a furnace to eliminate excess waste.

Mining for Gold, Among Other Things

The team found that a significant amount of precious metals that can be reused are found in discarded e-waste, metals that current processes are not recycling.

“A ton of mobile phones (about 6,000 handsets), for example, contains about 130kg of copper, 3.5kg of silver, 340 grams of gold, and 140 grams of palladium, worth tens of thousands of dollars,” Sahajwalla said.

Sahajwalla hopes to take the new micro-factories to communities, particularly under-served ones, around the world, as they are designed to be independent of the need for the investment of having a large, dedicated site.

“They can be set up in containers and transported to waste sites, avoiding the huge costs and emissions of trucking or shipping e-waste over long distances,” she told Design News. “Likewise, they promise a safe new way for poor communities in developing nations to generate an income from the production of metal alloys.”