Shadows Could Soon Power Your Electronics 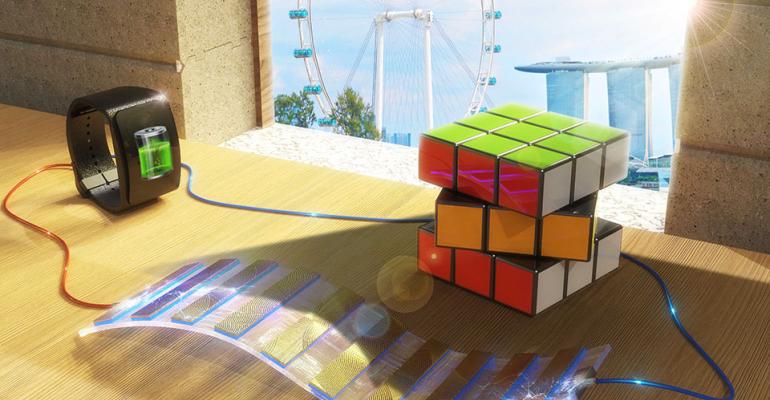 Novel device can generate enough energy to power a smart watch in an indoor setting.

Shadows are often thought of providing spaces without light or heat, but now researchers have found a way to use their optical effect to provide enough energy to power small electronic devices.

A team of scientists at the National University of Singapore (NUS) have developed a novel device that uses the contrast in illumination between lighted and shadowed areas to create power. Called a shadow-effect energy generator (SEG), the device could be used to generate electricity for electronic devices under indoor lighting conditions.

NUS Materials Science and Engineering Assistant Professor Tan Swee Ching, a co-leader of the research, acknowledged that the concept goes against what most think of when they think of light and energy generation, which is most often associated with generating energy from sunlight.

“Shadows are omnipresent, and we often take them for granted,” he said in a press statement. “In conventional photovoltaic or optoelectronic applications where a steady source of light is used to power devices, the presence of shadows is undesirable, since it degrades the performance of devices.”

Everyone knows the electricity it takes to keep smartphones and the growing list of other smart electronic devices—like tablets and watches—going all day. Though the COVID-19 crisis is keeping people closer to home—and thus with access to constant sources of power—as the world emerges from the pandemic and people resume their busy lives, the problem of providing long-term power to devices will also re-emerge.

Researchers are eyeing wearable power sources to help people keep their devices charged, and solar power—which can easily be harnessed when people are outside—is one way to do this. The NUS team decided to take a different tack and examine how to harvest energy also when shadows are persistent, such as indoor lighting conditions.

To do this, the team developed a low-cost SEC that can convert the illumination contrast that comes from partial shadow castings into electricity. The contrast in illumination in
duces a voltage difference between the shadow and illuminated sections, which produces an electric current.

The device serves a dual role, as it can be used as a proximity sensor to monitor passing objects, with an object’s shadow triggering the sensor to record its presence and movement.

The device itself is comprised of a set of SEG cells made of a thin film of gold deposited on a silicon wafer and then arranged on a flexible and transparent plastic film.  Researchers tested the SEG to see how it would perform to generate power as well as to power itself as a sensor, said Andrew Wee, a NUS Physics professor who co-led the work.

“When the whole SEG cell is under illumination or in shadow, the amount of electricity generated is very low or none at all,” he said in a press statement. “When a part of the SEG cell is illuminated, a significant electrical output is detected.”

Researchers found that the optimum surface area for generating electricity is when half of the SEG cell is illuminated and the other half in shadow, Wee added.

“This gives enough area for charge generation and collection respectively,” he said in a press statement.

Ultimately, experiments showed that the team’s four-cell SEG—under the effect of shifting shadows—performed twice as efficiently when compared with commercial silicon solar cells.

With the energy harvested from the presence of shadows created under indoor lighting conditions, the energy generated from the device would be sufficient to power a digital watch, the researchers reported in a paper on their work in the journal Energy & Environmental Science.

Researchers plan to continue their work and focus next on experimenting with other materials besides gold to bring down the cost of the device.

The team also aims to use their work as a building block to build self-powered sensors, wearable SEGs that can be attached to clothing to harvest energy during normal daily activities, and low-cost SEG panels to harvest energy from indoor lighting.