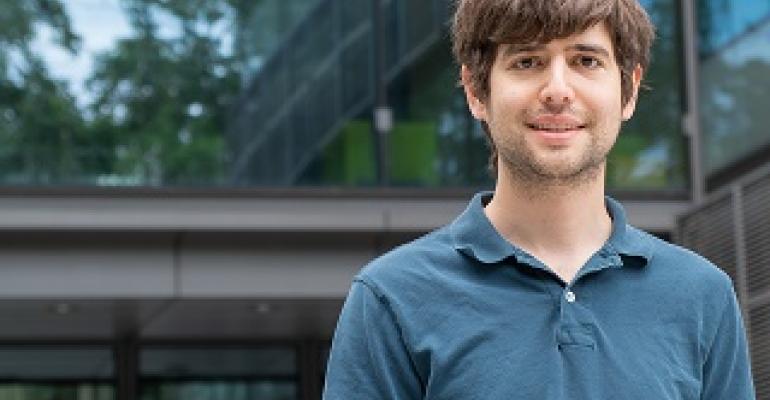 Daniel Straus, postdoctoral research associate in the Cava Group at Princeton University, worked with a team at Brookhaven Laboratory to determine the cause of instability within a perovskite material used for solar applications.
Researchers have identified the problem that’s been limiting the use of an inorganic perovskite material in photovoltaic applications.

Researchers have shed new light on instability within some inorganic perovskite materials, paving the way for the identification of better options for use in highly efficient, next-generation solar cells.

A team of collaborators from Princeton University and Brookhaven National Laboratory have determined why an inorganic perovskite material, halide perovskite cesium lead iodide, is so unstable. Their findings could help lead to the discovery of more stable and viable perovskites for use in solar cell production, they said.

Scientists first used perovskites—a broad class of crystalline materials—in solar cells in 2009, achieving an energy-conversion-efficiency rate of 4 percent. But that rate is now much higher alongside other advantages of perovskite-based cells, which can be made at a mere fraction of the cost of silicon cells.

Currently, the dominant halide perovskite in solar-energy conversion applications is based on methylammonium lead iodide, an organic-inorganic hybrid material that has been incorporated into solar cells with certified efficiencies of 25.2 percent. This rivals commercial silicon cells and thus shows promise for wide-scale production.

However, methylammonium lead iodide suffers from instability problems thought to originate from the volatile nature of the organic cation, researchers noted. To correct this problem, they have been trying to replace organic cation with inorganic cesium, which they know is significantly less volatile.

The new material resulting from this replacement has a key problem, too, however. It suffers from general instability, but until now researchers did not know why.

The new work shows that the problem is at the atomic level and stems from a room-temperature reaction, Daniel Straus, a postdoctoral research associate at Princeton, told Design News. Straus worked in the Cava Group, led by Professor of Chemistry Robert Cava.

“We identified that the reason cesium lead iodide is unstable is because the cesium atom rattles back and forth within the structure at room temperature,” he told us. “This behavior is usually not present in stable materials because it means that there is extra space left over in the material—if an atom can bounce around like cesium does, another structure type is generally the stable phase.”

“If the black perovskite phase converts to the yellow phase, the solar cell will cease to function,” he told Design News.

To try to solve this problem, researchers used structural analysis to demonstrate that the reason the perovskite phase of cesium lead iodide wasn’t stable was because the cesium atom is slightly too small. This is contrary to most computer models of the material, which show that “the perovskite phase should be stable,” Straus told us.

The results of this research indicate that the material must be stabilized before it can be used in solar cells because, unmodified, it remains inherently unstable and will not work effectively, Straus said. There are a few ways this can be done.

“One is through chemical modification, such as introducing a small amount of a larger cation or another halogen,” Straus told Design News. “Another is by making extremely small particles of the material, also called quantum confinement.”

A third way to stabilize the material is by epitaxy, where a material that matches the precise dimensions of the cesium lead iodide perovskite is grown on top of it to trap it in the perovskite phase, he added.

Other materials similar to halide perovskites also could be viable options for these types of cells in the future, Straus told us. The team will continue their work by trying to find such materials, he said.