Can Ultra-Sensitive Strain Sensors Be Made to Serve Advanced Robotics? 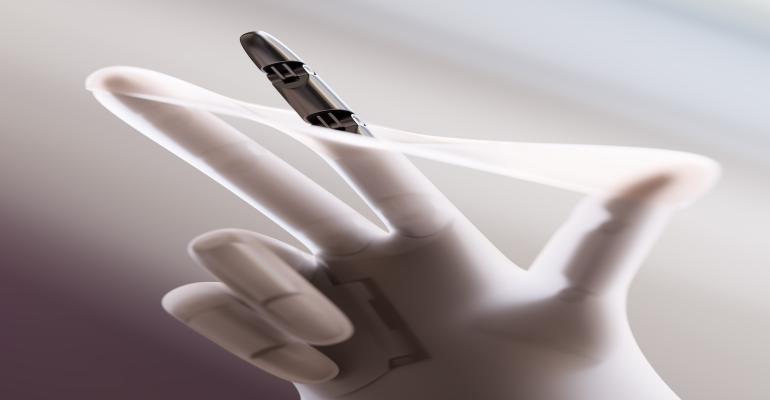 E-skin, robotic arms, and surgical robots can benefit from a new process that can customize strain sensors with more precision and accuracy.

Robotics is already widely used to provide automation in manufacturing and medicine, among other applications. Now researchers want to make their use safer, more precise, and more efficient with the invention of nanomaterial-based strain sensors with advanced sensitivity.

A team from the National University of Singapore (NUS) developed the sensors, which are ultra-thin, battery-free, can transmit data wirelessly, and are ten times more sensitive than existing technology when it comes to measuring minute movements; researchers said.

“Performance of conventional strain sensors has always been limited by the nature of sensing materials used, and users have limited options of customizing the sensors for specific applications,” he said.

The research and the design principles for sensors the team established can be applied to improving the performance of electronic skins as well as for soft robots, Po-Yen said.

Strain sensors measure pressure and are one-way robots “feel” how much pressure should be applied in a certain situation, such as to pick up or place an object.

A sensor’s working window typically determines how much it can stretch while still maintaining its sensing qualities as well as a high signal-to-noise ratio. The latter gives the sensor more accuracy in terms of differentiating between subtle vibrations and minute movements of the robotic arm, researchers said.

What NUS researchers achieved is to develop a production process to create customizable, ultra-sensitive sensors with a wide working window and high signal-to-noise ratios, they said. Previously, it was very difficult to produce customizable sensors suited to particular applications, they said.

Specifically, the process allows researchers to customize sensors to any working window between 0–900 percent while maintaining high sensitivity and signal-to-noise ratio. This is a significant increase over standard sensors, which typically achieve a range of up to 100 percent, researchers said.

Moreover, by combining multiple sensors with different working windows, researchers can create a single ultra-sensitive sensor that would otherwise likely be impossible to achieve, Po-Yen said.

Researchers published a paper on their work, which took two years to develop, in the journal ACS Nano.

The team also developed a working prototype of their process and resulting strain sensors in the soft exoskeletons of a soft robotic rehabilitation glove, one of a number of applications for the work.

“These advanced flexible sensors give our soft wearable robots an important capability in sensing patient’s motor performance, particularly in terms of their range of motion,” said NUS Associate Professor Raye Yeow. “This will ultimately enable the soft robot to better understand the patient’s ability and provide the necessary assistance to their hand movements.”

Another application for the strain sensors is precision manufacturing to help robotic arms perform more intricate tasks, such as working on assembling fragile products such as microchips, researchers said.

For this use, the sensors can be coated on a robotic arm like an electronic skin to measure movements as they are stretched. When placed along the joints of robotic arms, they can allow for accuracy in position and movement that current off-the-shelf strain sensors don’t have, researchers said.

The sensors also can augment technology such as the cameras aimed from different angles that currently are used to track positioning and movement of robotic arms in factory settings, improving overall safety by tracking more precise movements, they said.

Surgical robots also could benefit from the enhancement of more precise strain sensors, as well as new medical applications such as soft exoskeleton robots for rehabilitation, researchers added.