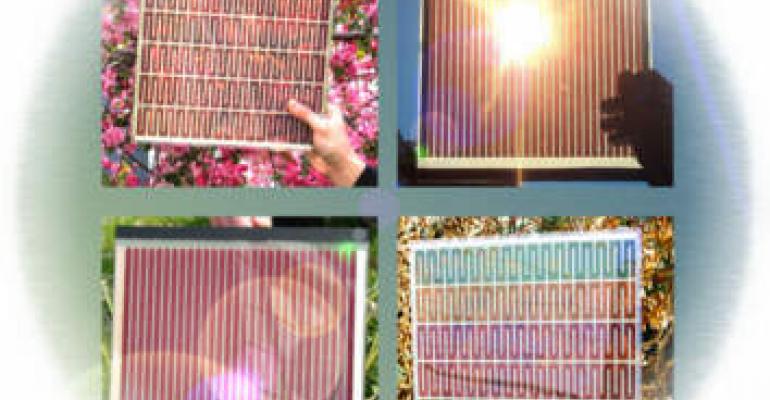 Researchers have created a new chemical compound that can bolster the efficiency of and support the sustainable manufacturing of electronic devices, including solar panels and smartphones.

A team of scientists at West Virginia University developed a new photosensitizer from an abundant metal that has the potential to replace more expensive and difficult-to-source materials currently used in electronic devices, providing a more sustainable way to develop them, they said.

The compound is made from zirconium, which is much more abundant and easier to gain access to than precious metals, such as iridium and ruthenium. These metals are currently are required to produce the chemical reactions needed for devices to work, said Carsten Milsmann, an assistant professor of chemistry at the university.

The compound is also stable in more varied types of conditions such as in air, water and changes in temperature, which makes it easier to work with in different manufacturing environments.

“We noticed that there have been few efforts in studying the more abundant metals titanium and zirconium because they are often not as easy to work with,” Milsmann said in a press statement. “Precious metals have always been the go-to elements because of their favorable chemical properties that make them easier to use and study, and that’s predominantly how it has been done in the field. We’re hoping to change that.”

One notable quality of the compound is that it can convert light into electrical energy, which means it could be used to create more efficient solar panels.

Most solar panels in operation today use silicon, which don’t work well in low-light situations or in the absence of sunlight. Researchers have been exploring the use of other materials so panels can harvest solar energy even on cloudy days or at night.

“The problem with most solar panels is that they don’t work well on cloudy days,” Milsmann said in a press statement. “They are pretty efficient, inexpensive and have a long lifespan, but they need intense light conditions to function efficiently.”

One alternative technology is what are called dye-sensitized devices, in which colored molecules collect light and can function even in low-light conditions. However, the dyes necessary for this technology currently rely heavily on ruthenium.

Milsmann said the new compound his team designed could potentially replace this metal, making it more cost-effective to develop and use these technologies.

“In the future, we could design buildings that produce energy, essentially making the façade of your building, including all of its windows, into a power plant,” he said in a press statement.

The compound also could have use in a technology that does the exact opposite of solar panels, Milsmann said. It’s well-suited also for organic light-emitting diodes, which convert electrical energy into light, meaning the compound could be used as a potential light source or producing more efficient mobile-phone screens.

“Many cell phone displays contain iridium, another precious metal compound that does exactly what our compound does,” Milsmann said in a press statement. “The advantage of having a light-emitting diode is that most of its energy is turned into light. In the past, light sources were inefficient because they only turned a small fraction of the energy they received into light.”

Researchers published a paper on their work in the journal Nature Chemistry.

The research team plans to continue their work with the next phase of development eyed at making the compound water-soluble, paving the way for its use in biomedical applications, such as cancer treatments, Milsmann said.

“The compound can produce reactive oxygen species that induce cell death,” he explained. “It sounds really dangerous, but because the reaction only occurs during exposure to radiation with light, its location and duration can be tightly controlled. This has the potential to remove tumors less invasively than through surgeries and chemotherapy.”