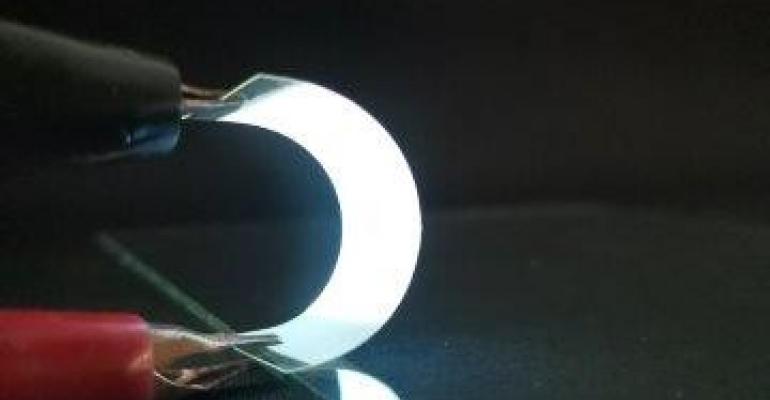 A team in China developed new flexible electronic displays made of a sustainable material that can biodegrade.

Researchers already have built flexible electronic displays that allow the design of wearable technology to actually be worn like tattoos on the skin. However, most of these devices so far have been fabricated or printed using plastic films.

Now a team of researchers from Nanjing Tech University in China has developed flexible films that can function as these alternating current electroluminescent (ACEL) devices that can be discarded after use and biodegrade using a more environmentally friendly material—fish scales.

Electronics that can be printed using thin films are seen as the wave of the future, as they can be integrated into textiles and used for the emerging flexible form factors. So far plastic has been the material of choice because it can bend and return to its original shape and also is strong enough to withstand these changes.

To replace plastic with something more sustainable, the Nanjing team created films out of a gelatin derived from collagen in fish scales, which are typically discarded and thus a plentiful source material. “Transparent plastics are usually used as substrates in ACEL devices; however, they are undegradable and may cause serious environmental pollution,” researchers wrote in an abstract for a paper they published on their work in the journal ACS Nano.

To create the films, the team first prepared a gelatin solution from the fish scales, then poured it into a petri dish to create a mold for the film as it dried.

The resulting film not only was flexible and transparent, like plastic films, but also showed biodegradability—degrading within 24 days when buried. The material also can dissolve within seconds in hot water, and then recycled to create a new film.

The team used the film to build a working flexible display that could sustain 1,000 cycles of being bent and then returned to its original shape and still function.

The Nanjing researchers hope these films can be used in a range of future flexible-electronic applications, they said in their abstract. “Our work demonstrates that the sustainable, flexible, and transparent FG films are a promising alternative for green and degradable substrates in the field of flexible electronics, including foldable displays, wearable devices, and health monitoring.”

Elizabeth Montalbano is a freelance writer who has written about technology and culture for more than 20 years. She has lived and worked as a professional journalist in Phoenix, San Francisco and New York City. In her free time she enjoys surfing, traveling, music, yoga and cooking. She currently resides in a village on the southwest coast of Portugal.
TAGS: 3DP 3D Printing Materials Renewables/Sustainability Consumer Electronics 3D printing biodegradable Sustainable Printed Electronics Nanjing Tech University fish scales gelatin derived from collagen in fish scales
0 comments
Hide comments
Related
You Might Like