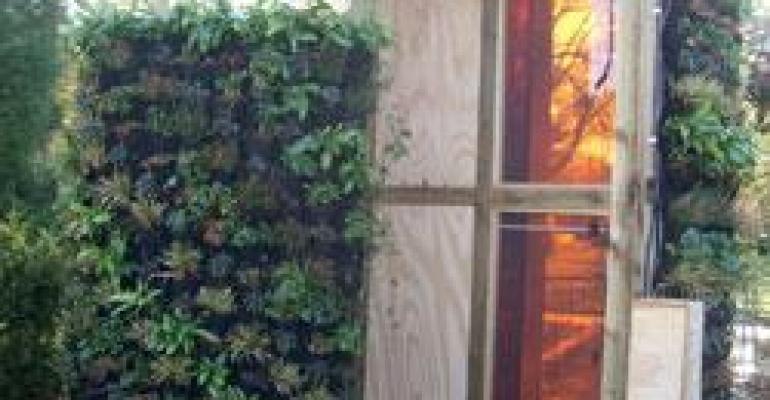 Energy researchers are constantly looking for ways to make cities and buildings smarter and more sustainable. With this in mind, biochemists at Cambridge University have teamed up with architects and landscapers to design an eco-friendly bus shelter that uses energy from the sun and a living “green wall” to power lighting for the structure. 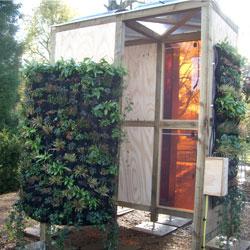 A company called Scotscape, which specializes in this type of design, provided the walls, while Polysolar provided the solar panels for the experiment. An architecture firm called MCMM Architettura designed the entire structure.

The idea behind the dual system of plant and solar energy is for the solar panels to generate energy during the day and the plants to kick in to provide energy after the sun goes down, Bombelli said in a press statement.

“Ideally you can have the solar panels generating during the day, and the biological system at night,” he said. “To address the world’s energy needs, we need a portfolio of many different technologies, and it’s even better if these technologies can operate in synergy.”

To create this synergy, designers made the green wall panels in the hub from a synthetic material containing pockets, each of which holds a liter of soil and several plants. The back of the pockets include a lining of carbon fiber that acts as an anode to receive electrons that are a byproduct of photosynthesis, while a carbon/catalyst plate on the front of the pocket acts as a cathode.

Electrons have a negative charge, so when they are generated, they also create protons with a positive charge. When the anode and cathode are connected through an external circuit wire, the negative charges migrate between those two electrodes. At the same time, the positive charges migrate from the anode to the cathode through the soil. The cathode contains a catalyst that enables the electrons, protons, and atmospheric oxygen to recombine to form water, thus completing the circuit and permitting an electrical current to be generated in the external circuit.

Meanwhile, the thin-film solar panels turn light into electricity by using mainly the blue and green radiation of the solar spectrum. The plants growing on the wall behind the solar glass share the light by using the red spectrum radiation needed for photosynthesis while avoiding the UV light.

The bus shelter includes an interactive element, with separate monitoring for both the solar aspect and the plant aspect of its energy-harvesting system. Members of the public can track performance in real time on a computer embedded in the structure itself.

While the bus shelter is just a prototype, researchers hope the design will inspire creative thinking about not just similar urban structures of the future, but also other multi-use or temporary shelters, such as those during emergencies like hurricanes or earthquakes, or shelters for refugees in war-torn regions, researchers said.

“This prototype is intended to inspire the imagination, and encourage people to consider what could be achieved with these pioneering technologies,” said Margherita Cesca, senior architect and director of MCMM Architettura, in a press statement.