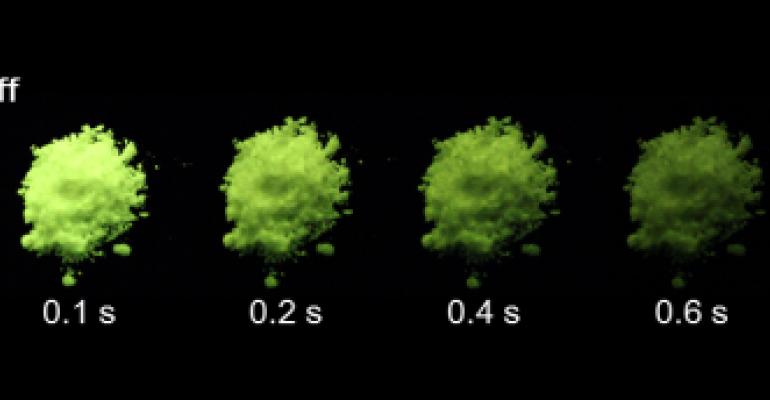 Phosphorescence has been a kind of Holy Grail in the quest to produce the most efficient possible lighting systems. Unlike fluorescence (as in fluorescent bulbs), which is when a material glows with power applied, but turns dark as soon as power is removed, phosphorescence is when a glow persists for some time period after power has been turned off. Both phenomena are caused by pumping electrons to an excited state, though the states are different.

Both of these have been areas of great interest in the field of organic LEDs (OLEDs), which are being used today in everything from TV monitors to cell phone displays. Until recently, phosphorescent materials were made from inorganic pigments such as zinc sulfide (green afterglow) or alkaline earth sulfides. These materials are not only rare, but they require high temperature processing (often greater than 1000˚C) and they tend to be quite brittle. These characteristics have made the implementation of practical applications a challenge.

Developing organic versions of these materials could address the production, durability, flexibility, and cost concerns and has been the area of considerable research effort. Some progress has been made in the development of organic thermally activated delayed fluorescent materials (TADF) with a significant improvement in efficiency. As for organic phosphorescent materials, previous versions could only operate at temperatures around -196˚ C, providing challenges not unlike those seen with superconductors.

However, a newly-announced breakthrough from Hong Kong, described the demonstration of a group of metal-free, pure organic, room temperature phosphorescent (RTP) materials with the potential to be three times more efficient than fluorescent materials.

According to the study’s senior author, Ben Zhong Tang, a chemist with positions at both the Hong Kong University of Science & Technology, and the South China University of Technology, “Organic RTP systems are desirable, thanks to their wider availability and better tailorability, but are challenging to develop. In this paper, we report pure organic RTP molecules with high efficiencies and long lifetimes that will help promote basic study and practical applications of RTP processes."

The new materials continued to emit light for up to several hundred milliseconds after power had been removed.

In a phone interview with Design News Tang said his team first published some early results of this work in 2010. At that time, however, they had to trade-off between efficiency and durability. The new materials, based on organic carbonyl crystals, provide both, in what should be a low-cost, easy-to-produce configuration that takes advantage of natural aggregation. These organic phosphors, which were derived from benzophenone, a common material sometimes used as an indicator of distillation, produce areas of light rather than the points of light that are typically produced by inorganic materials. This results in better coverage and less pixilation when used in a display. The team now also has a far better theoretical understanding of these materials.

Besides OLEDS, other potential applications include optical recoding systems based on coated paper. Once pressure is applied to the material from which the coating is made, it returns to its amorphous state, which does not glow. It can also be used for anti-counterfeiting applications and any place where a record of pressure being applied is desired.

Solar cells could also benefit by the increased photon excitation. Tang also mentioned wind tunnel testing as a possibility, where the object under test could be dusted with this powdered material and it would reveal the places where forces had built up.

Biomedical imaging is another promising area. The material could be injected into tumors, causing them to glow while the non-cancerous regions will not, providing guidance for surgeons.

The team is currently in discussion with several undisclosed companies, including a large US producer of materials.