The first 3D-printed robots made of both solids and liquids are also built in a single step: no assembly required. These hydraulically actuated robots are made using a modified, commercially available 3D printer.

The researchers that dreamed up this technique call it "printable hydraulics," and invented it to reduce the time and labor involved in making simple robots. Led by Daniela Rus, director of MIT's Computer Science and Artificial Intelligence Laboratory (CSAIL), the team published their work in a paper available on MIT's website. They will also present the paper at the IEEE International Conference on Robotics and Automation (ICRA) in Stockholm, May 16-20, 2016. 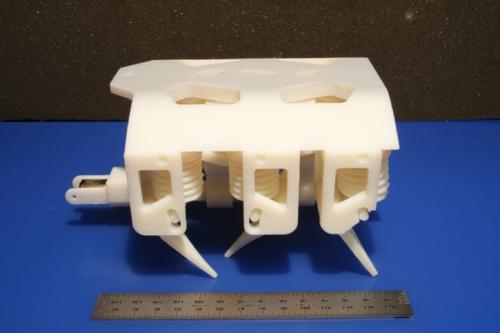 This hexapod robot with all its mechanical parts was 3D printed in a single step using liquid and solid materials on a modified, commercially available 3D printer. To propel the robot, six sets of "bellows" were 3D printed directly into its body. A DC motor spins the robot's central crankshaft to pump fluid via the bellows pumps directly above the crankshaft. The tiny, six-legged robot is less than 6 in long and weighs about 1.5 lb.
(Source: Robert MacCurdy/MIT CSAIL)

Rus, the Viterbi professor of electrical engineering and computer science, has led several other innovative robotics projects. These include different forms of self-assembling robotic components such as tiny robotic pebbles that self-assemble to duplicate an object when it's placed inside a pile of them, and larger-scale, flywheel-driven M-Blocks.

The team modified a Stratasys Objet260 Connex, which deposits three different photopolymers simultaneously, in addition to a support material, using an inkjet head. Two of the materials they used were a rigid and a flexible photopolymer. The third was a liquid, a non-photopolymerizing material sold by Stratasys as a model cleaning fluid that's primarily a polyethylene glycol. Researchers tricked the printer into accepting the liquid as a printing material by replacing the RFID chip in the cartridge with one from a material for making models. 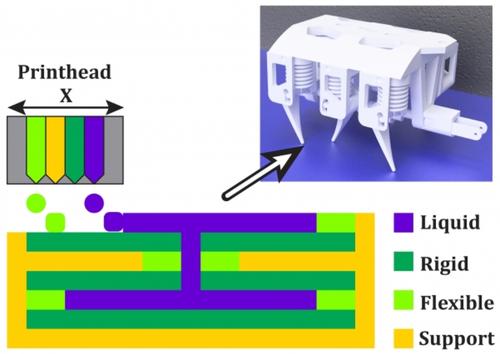 To 3D print the first robots made of both solids and liquids and built in a single step, MIT engineers modified a Stratasys Objet260 Connex, which deposits three different photopolymers simultaneously, in addition to a support material, using an inkjet head. Two of the materials were a rigid and a flexible photopolymer. The third was a non-photopolymerizing liquid sold by Stratasys as a model cleaning fluid that's primarily a polyethylene glycol.
(Source: Robert MacCurdy/MIT CSAIL)

The printer simultaneously deposits solid and liquid regions within a printed assembly, allowing the fabrication of complex, pre-filled fluidic channels. Because the force-transmitting fluid is deposited at the same time as the robot's solid body parts, all that's required is adding a single DC motor and a battery. Print time was 22 hours.

The researchers say the printable hydraulics process is compatible with any multimaterial inkjet 3D printer, and gives engineers a way to design templates for creating robots with different sizes, shapes, and functions. While inkjet printing allows very fine control over material placement, printing liquids and solids simultaneously would be even more difficult with other additive methods, such as laser sintering or filament fusion.

But the method can also be applied to those technologies. In stereolithography, instead of draining uncured liquid material from the model some could be enclosed in designated areas of the model. In fused filament printers, liquids can now be deposited via interchangeable toolheads, such as a dedicated nozzle. The ability to print liquids and solids in a single process makes it possible to print complex structures with intricate geometries that are either difficult or impossible to assemble by hand, and not feasible using other 3D printing methods.