From the Ford GT to the F-150: Aluminum Extrusion Aids Auto Lightweighting 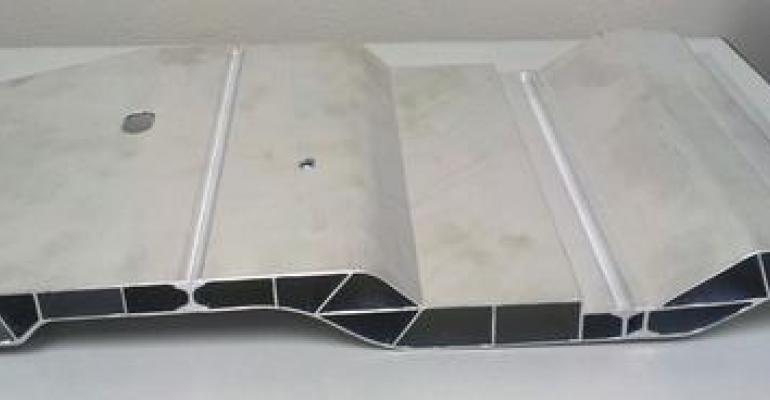 By 2025, US automakers must deliver fleet fuel economy of 54.5 mpg to avoid government penalties of $55 per mile shortfall, per car. That target was established by the Environmental Protection Agency and the National Highway Traffic Safety Administration (NHTSA) in 2012 to curtail US energy consumption and limit carbon dioxide and other greenhouse gases. Automakers have challenged their engineering teams to rethink vehicle architecture and pursue new technologies to achieve this goal, while still creating the kind of cars that Americans want to buy and drive. Among other strategies, aluminum extrusion is a growing part of the lightweighting solutions automakers are adopting to meet this goal.

As we enter 2015, it seems that lightweighting will have to shoulder a greater portion of the efficiency increase. Americans are buying larger vehicles -- pickups, vans, and SUVs now represent more than 51% of the market -- as well as fewer hybrids and electrics than expected by conventional wisdom. Americans also continue to want new safety, entertainment, and comfort features, which all add weight. 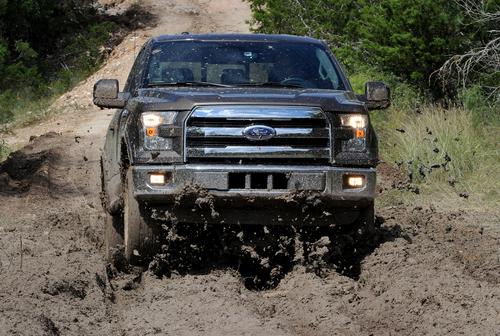 Ford's new F-150 pickup demonstrates that aluminum will be playing an important role in the lightweighting initiative. With its high strength-to-weight ratio, corrosion resistance, and formability, the aluminum sheet in the F-150's body is a major contributor to the truck's expected 700-lb weight reduction and resulting economy improvements.

How Aluminum Extrusion Can Help

But there's more to the F-150 story than its aluminum skin. Below the surface is a wide range of extruded aluminum components. While Ford hasn't disclosed much detail about extrusion usage, the Aluminum Extruders Council (AEC) estimates over 40 lb of extrusion per truck, much of it in body structure applications. According to Forbes, those aluminum extrusions save around 50 lb.

It's not only weight savings that drive increased extrusion usage in autos. Simply substituting aluminum for steel without rethinking part design and functionality can save weight, but is unlikely to demonstrate the cost profile needed to move it off the drawing board. The extrusion process allows the design engineer to put metal where it's needed and to incorporate features in a single part that eliminates the need for, and assembly cost of, multiple parts made of alternative materials. While more costly than steel per pound, aluminum extrusions' lower weight -- combined with the ability to incorporate features and functionality not feasible with steel -- often yields a solution that is cost neutral, or even brings a cost reduction. 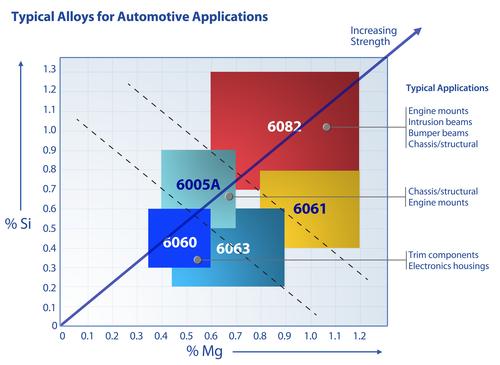 One example is an SUV pillar cover. Originally assembled from roll-formed and stamped steel parts, plus a press-fit and glued plastic end cap, the cover required buffing before finishing to achieve the desired aesthetic. The extruded aluminum replacement is 0.060-inch thick. At 2.50 inches wide, tolerance is held to plus or minus 0.015 inch. The cover's arc length is 92 inch with an extremely tight 90-degree rollover on one end that eliminates the plastic end cap. This replacement not only reduces weight by 35%, but eliminates buffing, offers better corrosion resistance, combines multiple parts into one, and enables a tighter bend tolerance, yielding a superior part at reduced cost.

It is this combination of aluminum and extrusion attributes that's leading to rapid increases in the use of extrusions in autos. In a report prepared for the AEC, Ducker Worldwide estimates that the use of extruded aluminum shapes will nearly triple between 2014 and 2025, reaching an average of nearly 40 lb per vehicle.

Extrusion usage won't be limited to traditional add-on applications like the pillar cover. Ducker forecasts big gains in extrusion use in body structure, suspension elements, seating, steering components, housings, and heat sinks for entertainment systems. A host of other applications even includes powertrain uses, like an extruded impeller for superchargers, increasingly used to generate enhanced performance from smaller engines. The ability to design extrusions for controlled energy absorption in crash tests makes extrusions a valuable element in the crash management systems of many contemporary vehicles. For example, Tesla cited the use of deep aluminum extrusions in the Model S' side rail as a key to its outstanding performance in the NHTSA's side pole impact test.

Finally, there are high-profile applications such as the all-aluminum chassis of the seventh-generation Corvette, launched last year. Making liberal use of extrusions, aluminum castings, and other aluminum components, the new chassis design knocked nearly 100 lb off the prior steel version while providing a 60% increase in chassis stiffness, leading to improved handling. Another is Ford's introduction in 2004 of its Ford GT supercar, with an aluminum chassis that made extensive use of 6000 series extrusion. From Ford's $100,000-plus (in 2004 dollars) limited-production supercar to its volume-leading F-150 pickup 10 years later, aluminum extrusions have contributed to substantial increases in vehicle performance and efficiency, and will continue to do so.