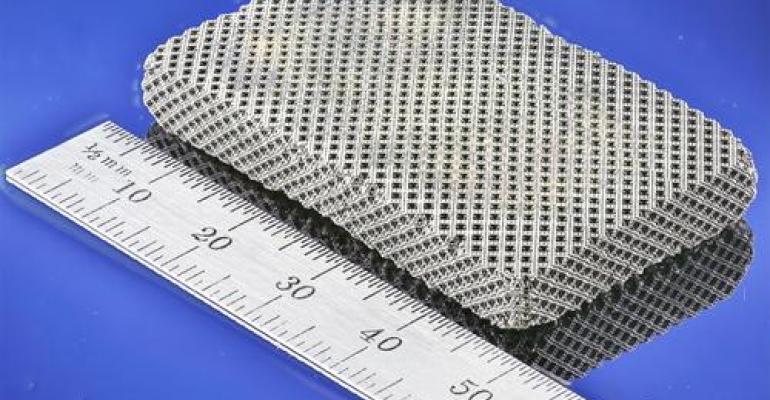 Nanotechnology is proving to have applications in numerous scientific disciplines -- from materials science to battery chemistries to solar energy -- but so far it's been difficult to scale materials up to provide the same benefits at a larger scale.

Now engineers at the Lawrence Livermore National Laboratory (LLNL) have achieved that ability to scale nanotechnology in 3D-printed architectures of arbitrary geometry, paving the way for super-strong, ultra-lightweight, and flexible metallic materials for aerospace, the military, and the automotive industry.

Researchers took inspiration from the hierarchical structure of materials found in nature -- such as wood and bone -- for the materials, they said. The finished product -- a nickel-plated metal material with high elasticity -- integrates multiple levels of feature size, from nanoscale films to the macroscale unit cells and lattices, within a single piece of material that's about 5 centimeters long. 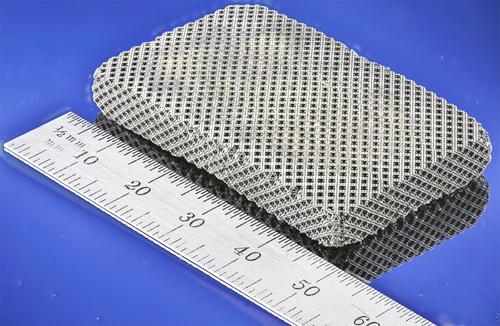 "With these 3D features we've been fabricating on a nanoscale, you can get some really interesting properties, but people have never been able to scale them up and see how they behave," said Xiaoyu "Rayne" Zheng, a former LLNL technical staff member who led the research and is the lead author on a paper about the work in the journal, Nature Materials. "We've figured out a strategy of hierarchically building them to take advantage of the nanoscale features, but use them at a large scale. It turned out better than we could have imagined." Zheng is now a professor of mechanical engineering at Virginia Tech.

Engineers originally printed the lattices out of polymer using a unique Large Area Projection Micro-Stereolithography (LAPuSL) printer invented at the lab by LLNL engineer, Bryan Moran. They then coated the lattice structure with a nickel-phosphorus alloy removed the polymer core in post-processing. What was left were extremely lightweight, hollow tube structures.

During material testing, researchers found that structures fashioned with walls 700 nanometers thick broke under a 5% strain, while those with 60-nanometer walls could stretch considerably more -- about 20% -- before failing.

Flexibility isn't the only problem the material solves, according to researchers. The concept also could help overcome current limitations of 3D-printed micro and nano-architectures by addressing what has been a typical tradeoff between high resolution and the size of a build. Now engineers can achieve high resolution with bigger parts, which has benefits for large-scale applications such as aircraft parts, batteries, or stretchable armor for the military, researchers said.

Now that they've proven the concept works, researchers said they could begin to scale the material up further to tens of centimeters and more, as well as explore photonic and electronic properties. They are also beginning to experiment with the incorporation of other materials, including ceramics, they said.