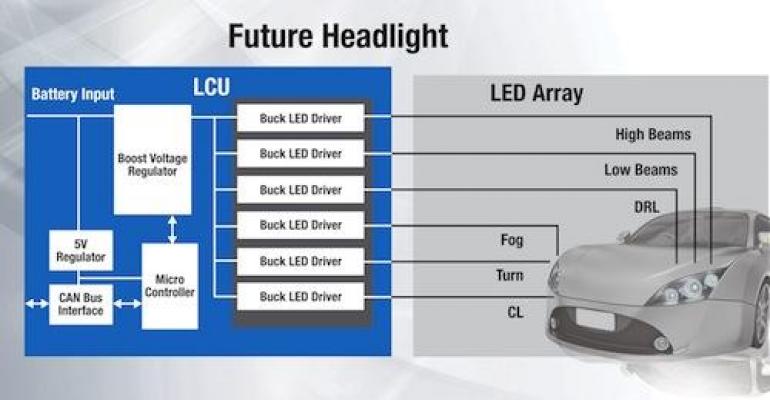 The automotive lighting industry has undergone a massive transformation with the growing trend toward LED-based light sources. As recently as 1990, the standard headlight assembly used only incandescent sources with very basic functionality: low beam, high beam, and off. Other functionalities, such as the turn signal, sidemarker, and position lights, were performed by separate incandescent sources. More advanced functions, such as separate cornering lights, race lights, and lighting features for advanced driver assistance systems, were not common or didn't even exist.

In 1991, the first high-intensity discharge (HID) xenon-based headlight was introduced, shifting the front lighting landscape into the power electronics realm. This shift to HID-based fixtures yielded a more efficient and longer-lasting system than its incandescent counterpart. However, HID lamps were far more complicated than incandescent sources, as they required extensive power electronics to operate. Like fluorescent lighting, HID lamps needed an ignitor to ionize the xenon gas, creating a conductive path through the lamp. Then a ballast comprising one or more switch-mode power conversion stages was required to regulate the lumen output in steady state. Unfortunately, this increase in complexity yielded little benefit in size or performance over the incandescent light. 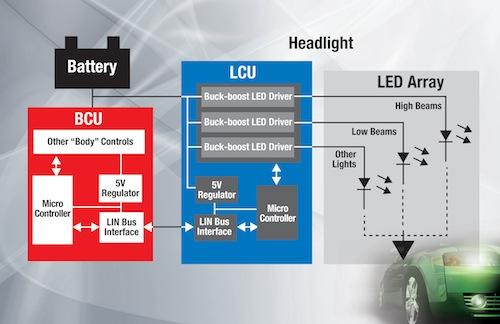 In 2007, the first light-emitting diode (LED)-based headlights became available in new automobiles. LED-based systems also require some method of power conversion. An LED driver is required to convert the battery voltage source into a constant current drive for a series or series/parallel string of LEDs. While the LED driver also adds cost and complexity to the headlight system compared to incandescent sources, there are many benefits to the LED system, including size reduction, much higher controllability of intensity and color, efficiency improvement, and longer lifetimes. Over the past five years, it has become increasingly evident that the LED headlight should eventually dominate the automotive marketplace due to its inherent advantages over other light sources.

Existing front lighting systems
Today, LED-based automotive headlights typically are designed with single-stage power converters that take the available input battery supply of 12V and convert it to a regulated constant current output. This single-stage design usually requires a buck-boost topology of some type in order to provide regulation during load-dump and cold-crank conditions. Load-dump is when the battery or some other significant load is disconnected from the alternator during charging. During load-dump, the remaining connected automotive systems can see voltages of more than 60V for hundreds of milliseconds. Cold-crank refers to starting the engine at 0C when the battery can droop as low as 4.5V -- and in some cases lower. The buck-boost topology allows for the input to rise above or drop below the output voltage of the LED array while maintaining regulation. Converters that can buck or boost can be implemented in many ways, but some common configurations are the floating buck-boost (or boost to battery), the SEPIC converter, the flyback converter, and the Cuk converter.