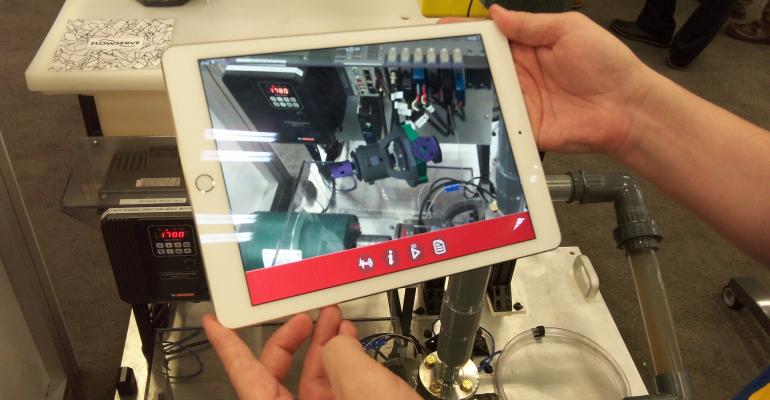 A group of industry suppliers is converging around the Internet of Things (IoT) to create a predictive maintenance system for pumps, motors and other factory floor assets.

National Instruments, Flowserve Corp., PTC, Inc., OSIsoft, LLC, and Hewlett Packard Enterprise recently showed off a means for monitoring pumps and predicting how, when, and where they might fail. The new technology demonstrator, which hasn’t yet been released as a product, could be used in process plants, fossil fuel generation, pharmaceutical manufacturing and chemical refineries, among other applications. “This is a great example of how industrial IoT technologies can help keep small problems from becoming big profit losses,” noted Brett Burger, principal marketing manager for National Instruments.

At the recent NIWeek 2017 conference, the new demonstrator took raw data from multiple sensors (temperature, vibration, pressure, voltage and current), sent it to analytics software, converted it to information, and then relayed it to a tablet computer, which showed the results in an augmented reality display. During a demo for Design News, engineers deliberately created a shaft misalignment in the pump, causing the system to produce a warning about the possibility of a future bearing failure.

The show-floor display used a CompactRIO real-time controller, a ThingWorx software platform for smart connected sensors, OSIsoft application software for data management, and an HPE Edgeline EL1000 on-site server for data storage, capture and control. Engineers at the show said that the analytics can be done in an on-site server, or by a cloud-based system. In addition to industrial pumps, applications also include blowers, motors and other factory floor assets.

In practice, the system would work by generating e-mail or text alerts for plant engineers or maintenance personnel. The engineers could then approach the pump and use a tablet computer or another type of display to examine the sensor data from various components on the machine. The information would appear on an overlay on the display, or even on a visor connected to a hardhat.

“The old way of doing this is to have experts walking around on the plant floor using their physical senses to understand when something’s going to fail,” Burger told Design News. “Now, they don’t have to do that anymore. They just wait for the pump to tell them when something’s wrong. So you’ve eliminated the need to have a person monitoring the system.”

The system even incorporates an exploded view drawing of the pump or motor, so that maintenance workers can see the failure in question, and go through the steps of fixing it. “So when it comes time to replace the bearing, they can be guided through a manual-type, step-by-step process,” Burger said. “It makes it easier and reduces the risk of human error once you actually get out there and start turning wrenches.”

The system is capable of recognizing a wide variety of technical anomalies, including bearing faults, power faults, seal failures and many others.

“It’s about time and money,” Burger said. “You take measurements of the asset, run them through software, and do the analytics, so you can make better business decisions.”