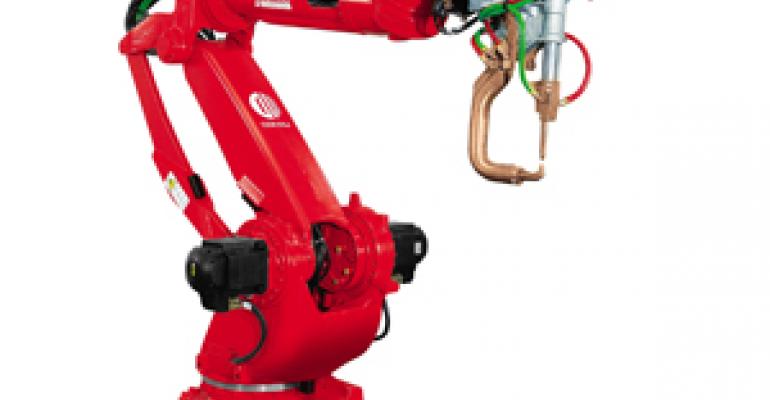 Fully automated assembly lines and integrated robotics are an essential part of modern automobile production. To ensure a high level of productivity, assembly, painting and welding tasks are all handled by anthropomorphic robots which must meet the highest demands for round-the-clock operation.

For automobile manufacturer Alfa Romeo, part of the Fiat group, robotics is a key component in the successful introduction of new cars such as the MiTo, its latest compact car. Working with COMAU Robotics, Alfa Romeo is using industrial robots for production of the MiTo that rely on dual core PCs, tightly integrated drives and high-speed Ethernet POWERLINK communications to fully synchronize drives and I/O every 400 Amusec.

"One of the highlights of the application is that we actually developed a PC that plugs directly into our drive rack," says Robert Muehlfellner, automation director for B&R Industrial Automation. "The architecture allows for control of all the drives in a single drive rack instead of separate motion and/or robot controllers."

This hardware approach simplifies the system architecture by using one power supply and a common backplane where the user can plug in all the individual drive modules as well as the PC that controls the entire robot right in the rack. All of the additional components required are only just a handful of separate I/O nodes.

In the past, COMAU relied on customer-specific automation solutions. But with the quest for continuous improvement and fast development times, specific solutions quickly appeared outdated, because any adjustments or improvements reflected negatively in the total costs.

Because the most important aspect of a robot is its drive technology, COMAU decided in favor of standard components with interpolation of the axes processed centrally on a dual core processor PC. One advantage of the dual core architecture is its ability to intelligently share tasks, and dedicate one core to the run time system and the other core to support Windows.

"One core can be dedicated to visualization and the other to perform processing such as trajectory calculations for the robotics motion and/or other control systems functions," says Muehlfellner. The real-time operating system for the control system is VX Works-based, with Windows serving an active front end and running in the idle time of the RTOS which has full control over all the system resources and is given absolute priority. By dedicating one core for use by Windows which runs in parallel with the real-time operating system, if Windows has a performance issue, the real-time system continues running.

The industrial PC and Core 2 Duo processor offers sufficient computing power for path calculations that are communicated to the ACOPOSmulti modular drive system. Set values are sent cyclically using Ethernet POWERLINK to the servo drives every 400Amus and provides enough bandwidth to tunnel two complete robots with additional axes, I/O data, diagnostics data, safety information, as well as fieldbus systems. POWERLINK also enables COMAU to integrate combinations of Profibus, DeviceNet or CANopen master/slaves as needed - an important capability so the robots can be connected to an existing infrastructure in the production plants.

Another feature developed specifically for this application was a redundant induction braking capability within the ACOPOSmulti drive to provide additional safety. When power is switched off, the robot arm is suspended by motor brakes. Otherwise, gravity would pull the arm toward the ground without any braking which could cause mechanical damages to both the robot and the surrounding area.

To prevent that from happening, B&R and COMAU developed a Safe Brake Control function which provides an additional, redundantly designed motor brake control. If the motor brake fails, the ACOPOSmulti drive system
detects it and prevents the arm from dropping rapidly by absorbing the energy in the drive system's power supply. The potential energy of the robot arm is converted in a controlled manner to heat as it drops slowly toward the ground and prevents damage.

"Even if the robot is powered off and a brake fails, the potential energy stored in the robot would be used to reactivate the entire drive control system and provide control braking," says Muehlfellner. "The robot would sag toward the ground, but it would be a slow and somewhat controlled motion versus crashing into the ground."