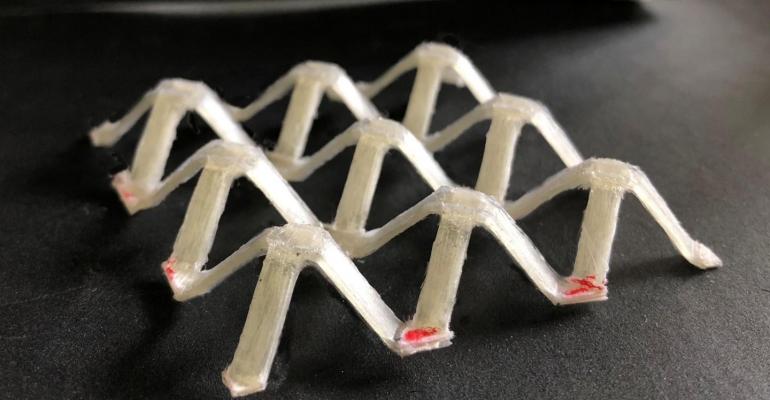 Combining silk fabric with epoxy creates laminates that can be formed into shapes, like the structure pictured, for novel biomedical uses.
Strength and biocompatibility combine for use in novel orthopedic and other biomedical applications.

Combining naturally-created silk with polymers is the latest way researchers have devised to help create medical implants that can perform better than current designs while remaining biocompatible and retain an ability to dissolve once their work is complete.

Silk is widely used in material development and is an attractive option in particular for medical applications, where it has a long history of use. Some of the earliest use of sutures involved those that were silk, and surgeons currently use silk as sutures in eye surgeries.

Related: The 10 Best Cities to be a Biomedical Engineer

The material also has great potential for use within the body because of a number of reasons, said Juan Guan, associate professor at the University of Illinois Urbana Champaign and the project's principal investigator.

"Silk has great potential for use in biomedical applications," she said in a press statement. "Silk is versatile, and the human body tolerates it quite well, and can even degrade and absorb it."

Researchers already have developed composite materials for medical use using silk, but typically only with short fibers or the material’s primary protein.

The work of Guan and her team is different in that the scientists focused on silk fabric woven from a long, single thread. This is significant because the longer the fibers and the more of the entire fabric that is used can determine the strength of the fabric because it can more effectively distribute mechanical stress than a series of shorter, discrete ones.

The team used silk from the common, domesticated silkworm Bombyx mori, as well as tougher fibers with more stretch from the wild species Antheraea pernyi.

Scientists combined this fabric with a polymer matrix—mainly an epoxy—commonly used in adhesives. This combination formed a laminate similar to the material used to cover furniture that can be cut into shapes depending on the application, Guan said.

Because of their combination of biocompatibility, strength, and flexibility, researchers eye the use of this new material in novel ways and already have been working with doctors to test some of these applications.

One is to develop structures resembling cages that temporarily hold vertebrae in place as they fuse after orthopedic surgery, something that is usually done now with metal, Guan said. The silk composites' hardness and stiffness are more compatible with bone, making them potentially more resilient yet more comfortable than metal fittings, she said.

Researchers have run into some challenges with potential uses for the material, however, they acknowledged. Because the inside of the body has a lot of moisture, the silk can weaken and soften, which inspired the team to test silk-epoxy composite materials for their durability in humidity or immersed in water. So far, the materials remained stiff enough to function as implants, although they did lose some of their stiffness, Guan said.

The use of epoxy also is slightly problematic for biomedical applications because the body can’t break it down and absorb it the way it can break down silk, so it can’t be used in implants that dissolve on their own.

To solve this problem, Guan and her team recently began experimenting with biopolymers that also can break down and absorb within the body. However, they have less internal cohesion than epoxy polymers, she said.

"The key question is how to make the interface between the biopolymer and the silk fabric more robust," Guan said in a press statement. The team plans to continue their work to find an optimal combination of silk and polymers for a range of biomedical uses, she added.