HomeIndustryGlobus Medical Is Firing on All Cylinders with Its Spine Robotics Platform (and Investors Are Noticing)
Recent
Industry
Consumer Reports 10 Least Reliable Cars for 2022
Nov 16, 2022
2022 North American Car, Truck, and Utility of the Year Finalists
Nov 18, 2022
Not All iPhone 14 Smartphones Are Alike
Oct 12, 2022
Hot Wheels Legends Tour 2022 Unveils Winning Custom Car
Nov 21, 2022
Fifty Years Later: The Improbable Birth of the Lithium-Ion Battery
Nov 04, 2022
Technology to Be Thankful For On Thanksgiving
Nov 22, 2022
LA Auto Show Introductions Hint at a Return to Normality
Nov 17, 2022
3 Reasons to Use Rust in Embedded Systems
Nov 23, 2022 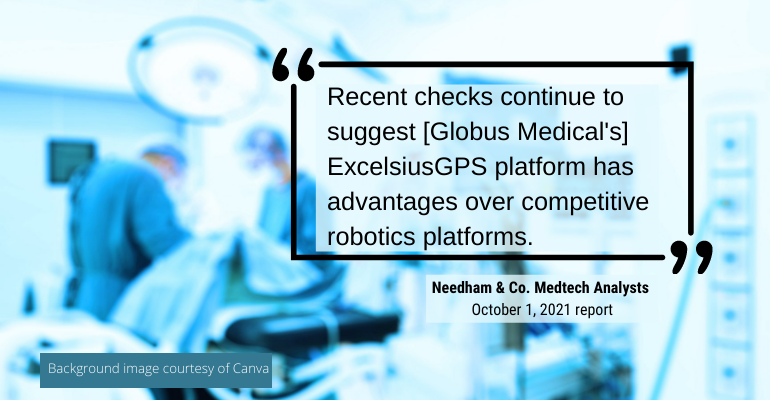 A medtech analyst shares insights for one of his most frequently asked about companies.

In recent weeks, Needham & Co.'s team of medtech analysts met with a series of investors across several regions of the United States. We previously shared their insights on AtriCure, Haemonetics, NuVasive, and LivaNova. Globus Medical was also among the most frequently asked about companies during those conversations, according to a report from Needham's Mike Matson, David Saxon, and Joseph Conway. More specifically, investors have honed in on the company's success in spine robotics.

The Audubon, PA-based company won FDA clearance for Excelsius3D in August. The intraoperative 3-in-1 imaging system was previously identified by MD+DI as one of the 10 most anticipated new medical devices of the year.

"[Globus Medical's] above-market revenue grwoth has been driven by implant pull-through from the ExcelsiusGPS robot, sales force expansion, and new product launches," the analysts note in the report. "We expect this to continue into 2022, which should be augmented by the launch of its Excelsius3D imaging system. Recent checks continue to suggest GMED's ExcelsiusGPS platform has advantages over competitive robotics platforms."

Globus says Excelsius3D consolidates 360-degree cone-beam CT, fluoroscopy, and high-resolution digital radiography into one unified solution, eliminating the need for multiple imaging systems during one procedure. The company touts the system's precise motion, omnidirectional wheels, and intelligent maneuverability. Excelsius3D functions as a standalone imaging unit, or as an extension to the Excelsius ecosystem, Globus said.

“Excelsius3D underwent rigorous performance testing of various capabilities to support this 510(k) clearance, as it is our first imaging system 510(k) to be filed with the FDA’s Office of In Vitro Diagnostics and Radiological Health,” said Kelly Baker, PhD, senior vice president of regulatory and clinical affairs at Globus. “We are excited to expand into a new product space with the FDA and help bring this truly innovative system to market.”

The company noted that it is ramping up production and preparing for commercial release of Excelsius3D in the fourth quarter. The system is designed for 2D fluoroscopy, 2D digital radiography, and 3D imaging of adult and pediatric patients. It is indicated for use where a physician benefits from 2D and 3D information on anatomic structures and high contrast objects with high x-ray attenuation such as bony anatomy and metallic objects.

Globus also recently announced the first surgery performed with its ExcelsiusGPS Cranial Solutions for robot-assisted navigated deep brain stimulation (DBS). Cranial Solutions is the latest evolution of the ExcelsiusGPS platform, transforming it to a 2-in-1 application system, and is now commercially available in the United States.