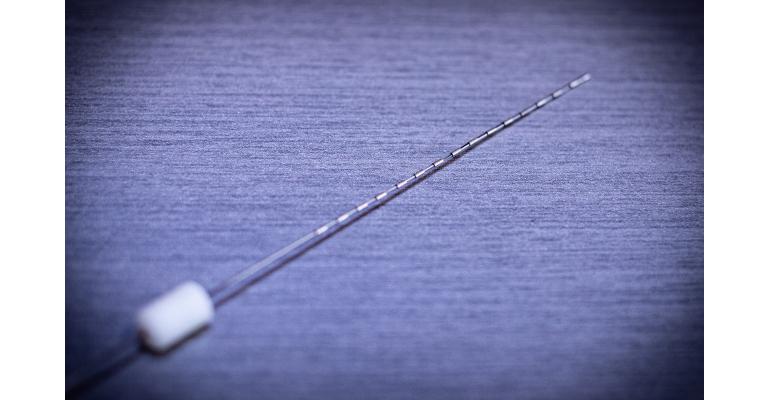 Research shows that a minimally invasive brain implant can reach the sulcal areas of the brain to increase sensory accuracy.

A first-in-human study out of the Feinstein Institutes has demonstrated a minimally invasive brain implant can restore a sense of touch in the fingertips of patients who are paralyzed, experienced a stroke, or peripheral neuropathy. The thin, depth electrode is able to reach the sulcal areas, commonly known as folds, of the brain and increase sensory accuracy.

The <1mm-thick depth electrode, which resembles a wire with ring electrodes, can be inserted into the brain with a craniostomy, according to Chad Bouton, professor in the Institute of Bioelectronic Medicine at the Feinstein Institutes, co-principal investigator of the study, and author on the August Brain Stimulation paper on the research. The small hole drilled into the skull is a significant improvement on devices that require bone flaps, he said, and reduce the risk of complications for patients. The stereoelectroencephalography (SEEG) electrode was built using existing technology—an intentional decision as depth electrodes are already approved for use in epilepsy and other diseases.

The SEEG seemed liked the natural next step for Bouton and team after a groundbreaking 2016 Nature paper on restoring movement in a quadriplegic patient. That research relied on implanted electrodes and allowed a paralyzed patient to regain movement in his inactive limbs. While it was an astonishing accomplishment, a significant element was lacking: “We reached a lot of milestones—the person was able to move, but one of the things that was missing was that he couldn’t feel anything,” said Bouton.

Since then, he and his collaborators have been working to restore touch for patients who lost the sense after trauma or disease. With the two patients enrolled in the study, Bouton and his co-researchers were able to reroute the sensory signals, in what they refer to as an electronic neural bypass, to restore a sense of touch.

“We know that neurons use electrical chemical signaling to talk with each other, so we used electrical impulses to stimulate the sensory cortex of the brain, which is right above your ear,” explained Bouton, professor with the Institute of Bioelectronic Medicine at Feinstein Institutes for Medical Research of Northwell Health. “That area of the brain normally processes all the signals from your skin and from your muscles, from your sense of touch throughout your entire body.”

Chad Bouton, professor in the Institute of Bioelectronic Medicine at the Feinstein Institutes 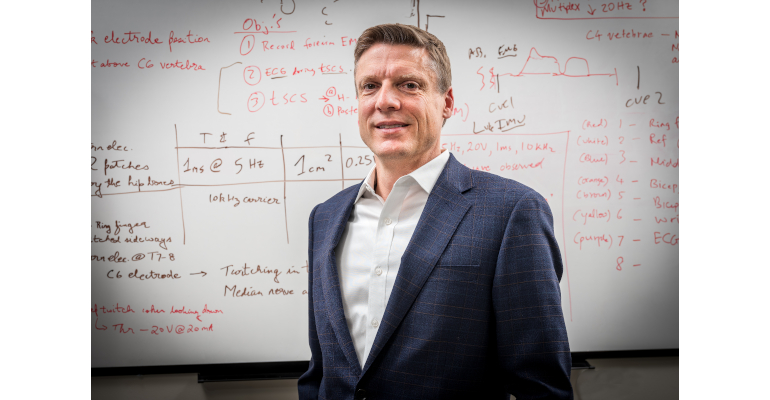 Trauma to the spinal cord, stroke, or diabetes and resultant nerve damage can interfere with that signaling. “With someone who is paralyzed or has had a stroke, that signal can be blocked,” said Bouton. “We use electrical impulses to “trick” the brain that sensory information is coming in. We can reroute around the injury or damaged area and go right into the brain and stimulate that sensory area.”

Those “tricked” neurons perceived sensory signals and the two patients in the study reported pressure, tingling, and vibration-like feeling in their fingers. What’s more, the sense of touch was able to be highly focused to a location. That’s due to targeting the sulcal areas of the brain, said Bouton. “We choose the depth electrodes to reach the sulcal folds because that’s where sensory information for fingertips is located. We were able to stimulate those neurons and the person would tell us ‘I feel something on the tip of my index finger and thumb.’ It was very focal, and that was remarkable.” The sulcal targets were carefully mapped via fMRI and the human connectome project maps.

While sensing pressure and tingling is a significant advancement, restoring a traditional sense of touch will require a bit more fine-tuning of where or how intensely to stimulation the sulcal areas, explained Bouton. “How do you talk neurons? There’s 87 billion in the brain and we don’t understand the language yet, but we’re working on it.” A restored sense of touch could be profound for patients and their daily living, as touch is needed to button a shirt, or grasp certain objects.

The proof-of-concept research also has significant implications in creating functional movement for various patients including those paralyzed and amputees, with skin-like sensors on prosthetic fingertips. As part of the SEEG study, Feinstein researchers also have been using AI to decode the finger movements and associated brain impulses, leading to the potential of bidirectional stimulation. Future work for Bouton and the team includes moving toward building a chronic electrode that can be implanted for ongoing use.

Recently, Florida Atlantic University shared related research. The university’s College of Engineering and Computer Science achieved a sense of touch with its liquid metal tactile sensors which can be stretched over fingertips of a prosthetic hand.