Recent updates to the modeling and simulation platform developed by Maplesoft are intended to let designers and engineers know "what works and what doesn't" in large, complex, multidomain systems.

Recent updates to MapleSim, the modeling and simulation platform developed by Maplesoft, contribute important new elements to the company's vision for a “system-level modeling” technology that will simplify machine design and allow engineers to test machine designs earlier using virtual prototypes. System-level modeling technology is a key element of a higher-level process the company calls “model-driven innovation,” which allows a design team to simulate and test a complex physical machine, even if its components are designed by different people from multiple engineering domains.

Such high-level modeling is essential to meeting the emerging needs of product-development teams, said Laurent Bernardin, executive VP and chief scientist at Maplesoft, in an interview with Design News. “Designs and technologies are getting more and more complex,” he said. “Regulations and budgets are getting tighter. The days are over when you can get away with building expensive hardware prototypes and hoping for the best, then fixing them up after the fact. Engineers are looking toward getting the design right, up front.” 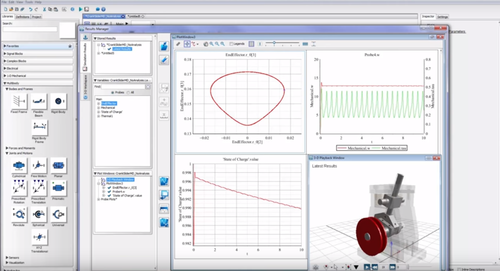 In model-driven innovation, Bernardin explained, “very early, you build a system-level model that has all the components of the full design, but initially with a very rough level of fidelity. You get a good idea of how what you're designing divides into components, and how those components interact. You can get a very good sense of what will work and what won't work, and the problem areas -- all from the very start. As you move along in the design, you develop a more and more refined version of the components, always referring back to a system-level model.”

Maplesoft, a subsidiary of Japanese CAE software and professional services firm Cybernet Systems Co. Ltd., is known for its design, modeling, and simulation tools used in automotive, aerospace, electronics, and other industries. Maplesoft's best-known products are Maple, a technical computing and documentation environment, and MapleSim, a modeling and simulation solution that combines physical modeling with symbolic computation.

A new MapleSim CAD Toolbox makes it easier to import CAD models into MapleSim, so the user can examine how a design will behave as part of a larger, multi-domain system. The toolbox includes support for a number of proprietary formats, including Inventor, SolidWorks, and NX, as well as the STEP and STL file formats. Bernardin said Maplesoft plans to release the next version of MapleSim in May.

Maplesoft's long-term development roadmap focuses on enabling system-level modeling of multi-domain physical systems. Much of the existing simulation software is limited to a single physical domain, the company claims, and unable to handle the math inherent in complex systems. Commonly used simulation products in CAE are based on signal processing, and are more oriented toward control systems, rather than physical systems such as machine designs, according to Maplesoft.