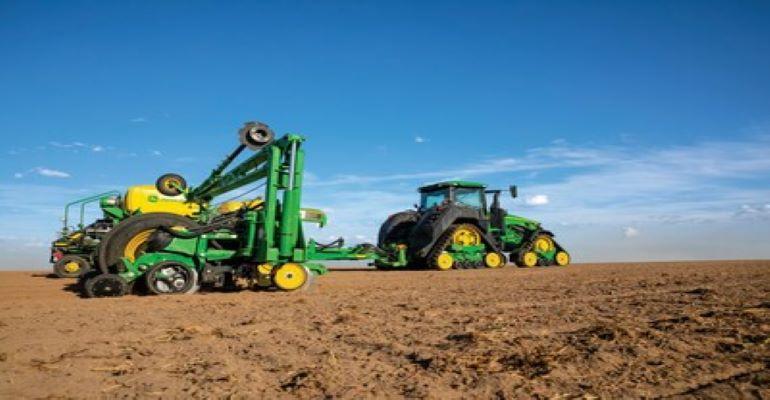 While much of the technology at last week’s CES (Consumer Electronics Show) focused on areas such as consumer electronics, automotive, and robotics, an area not traditionally thought of as high-tech but vitally important to the U.S. economy─agriculture─was the focus of an interesting keynote session.

For John Deere, technology has long been considered a strength of the centuries-old company that pioneered farm tractors and construction equipment. But the company’s technology focus has taken on a particular meaning in today’s agricultural world, where there are fewer farmers─and land to farm─than ever, meaning that farming must be more productive. More than ever, technology is an important ally.

“We ensure that the world has food, fibers, and infrastructure,” said John May, John Deere CEO and Chairman, to the audience during last week’s keynote.

May noted that long before modern-day tech such as GPS and AI, John Deere pioneered innovations such as the first self-propelled combine harvester in 1947, and the hydraulic bulldozer in 1958.

The challenge of a growing population and need for higher agricultural efficiency is not lost on May, citing prediction that the world’s population would grow from 8 to 10 billion in coming years, requiring that farmers would need to increase production by over 60% on the world’s arable land.

Keeping Up With Trends

Another keynote session speaker, Deanna Kovar, VP Production and Precision Agriculture Systems for John Deere noted that the company started dabbling in GPS technology as early as the late 1990s and started collecting geospatial data in the 2000s decade. By the 2010s decade, John Deere was starting to implement network and cloud connectivity for agricultural and construction equipment, she added.

In more recent years, vision systems have played a larger role in John Deere’s products, said Julian Sanchez, Director of Emerging Technology for John Deere. He noted that back in 2015, the company developed a stereoscopic vision system to help farmers transfer crops from harvesters to wagons. In 2021, John Deere developed their first autonomous tractor.

Fast forward to the current decade, and not surprisingly the company is leveraging AI and robotics data to help farmers to track many aspects of agricultural operations, including crop data, and make real-time adjustments. This aspect is considered crucial given factors such as unpredictable weather, labor issues, and rising costs.

At this year’s CES, John Deere introduced ExactShot, a technology that enables farmers to reduce the amount of starter fertilizer needed during planting by more than 60%. The technology uses sensors and robotics to place starter fertilizer precisely onto seeds as they are planted in the soil, rather than applying a continuous flow of fertilizer to the entire row of seeds.

John Deere believes the technology could save over 93 million gallons of starter fertilizer annually and prevent wasted fertilizer from encouraging weed growth or increasing the risk of running off the field into a waterway.

The company also displayed an electric excavator, powered by a Kreisel battery, will provide construction workers and road builders with lower daily operating costs, reduced jobsite noise, enhanced machine reliability, and zero emissions, without sacrificing the power and performance they need in a machine.