Transfers the control of a large number of motion axes from one numerical control kernel to another within a CNC system, using multiple NCKs, and enables implement control schemes for virtually any type of machine tool.

Expanding the shared control of functionally interrelated motion axes and spindles on multi-station dial and rotary transfer machines is the chief benefit of CNC architecture developed by NUM Corp. of Naperville, Ill.

The company says that its enhanced Flexium+ 68 system transfers the control of a large number of motion axes from one NCK (numerical control kernel) to another within a CNC system. By using multiple NCKs and the axis-sharing capability of the system, “machine designers can implement control schemes for virtually any type of machine tool, regardless of its complexity,” NUM reported.

Each NCK accommodates as many as 32 combinations of interpolated axes or spindles per station, and supports up to eight CNC channels. According to the company, each CNC channel can control any of these axes or spindles, run its own part program asynchronously or autonomously, or synchronize with any of the seven other channels. The only requirement is that all shared servo drives be connected to the first NCK in the system. 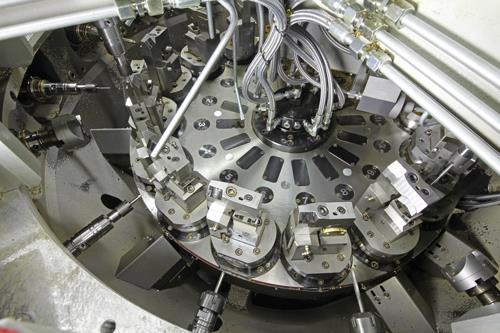 Engineered for machines with as many as 32 shareable axes (linear, rotary, or measured spindles), the system allows hot-swapping their control from station to station without affecting production, said Steve Schilling, general manager. Previous Flexium versions allowed sharing across a maximum of eight channels. With the new system, machine designers can swap up to 32 axes to any number of channels.

Flexium+ 68 is for OEMs but can be retrofit. Schilling said it reflects an industry-wide trend toward greater production capability and throughput in machines -- objectives that are achieved in the latest models with a high number of stations, each equipped with a multi-axis machining head.

The system is scalable and can be used in machines with more than 200 interpolated axes and spindles, and over 50 CNC channels, according to the company.

The system meets a range of production needs, from fabrication of small, highly detailed watch parts on a rotary indexing table to machining of crankshafts or other large parts on a transfer line. “It is suitable for any workpiece that goes through a line of machine tools,” Schilling added. 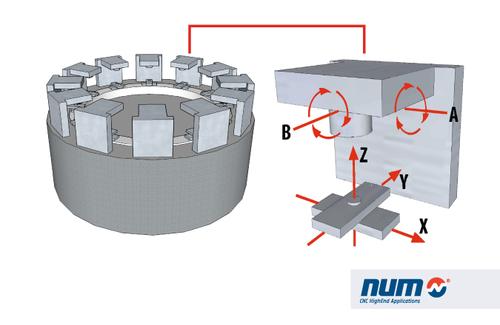 The company, in fact, describes the operation as a “timeshare” arrangement. The dedicated CNC channels that operate each station control the multiple axes and spindle movements of machining units and pass control from one channel to another on the fly.