HomeIndustrial MachineryDynamic, Smart Modeling Amped Up for Metal Fabrication Design Software
Recent
Using Low-Code/No-Code Systems for Manufacturing Quality
May 19, 2022
Los Angeles Fire Department Deploys Nation’s First Electric Fire Truck
May 19, 2022
Supplier News Looks at an Automated Coolant Management System
May 19, 2022
Is Magneto the Hero We Need to Destroy Blood Clots?
May 19, 2022
POLL
Using AI To Help the Deaf Communicate
May 19, 2022
Argo AI Expands Driverless Operation to Austin and Miami in Search of More Challenges
May 18, 2022
12 Ideas that Could Change the World
May 18, 2022
Making the AC Power Main Intelligent
May 18, 2022

IronCAD LLC recently released the 2016 version of its 3D modeling solution targeted at designers in the metal fabrication and assembly sector, providing reportedly improved capabilities in sheetmetal design and including a new mechanical add-in. In an interview with Design News, Cary O'Connor, vice president for marketing, stressed that the new release follows the company's longstanding development philosophy emphasizing simplicity and design flexibility.

O'Connor said one of IronCAD's key differentiators is the ability for the designer to switch between a history-based and a flexible design modality. “The user should be able to make changes at any stage of the design process,” he said. “Any change should be easy to do, without worrying about how the model was constructed.” 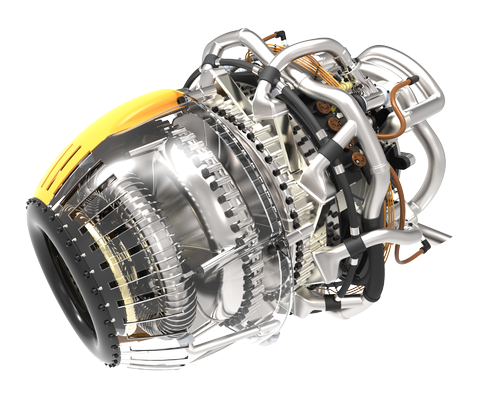 A solid model rendering of a turbine in IronCAD that can be shared with other stakeholders through the software package's new collaboration tools.
(Source: IronCAD)

This flexibility lets a designer make changes without having to backtrack through previous versions, according to Steve McGuinness, who handles CAD business development for IronCAD. “With constraint-based modelers, if you have to make unanticipated changes, you almost have to reverse course and start over again.” He claimed that the software’s dynamic modeling takes the worry out of about breaking constraints, saying, “You just make the changes you want to make.”

A key objective with such smart design functions is to eliminate the repetitive, minute configuration and tinkering that can take up much of a designer's time. For example, a process called Smart eBehavior allows the designer to create intelligent parts and components that automatically size and position themselves and connect to other components. “It's a dynamic modeling environment,” said O'Connor. “You can move things around where you want.”

IronCAD has expanded its catalog of drag-and-drop capabilities. The software comes with a catalog of standard objects, such as cam blocks, cylinders, belts, and plates, which can be dynamically reshaped and adjusted to meet the needs of a design. Designers can add their own objects to the catalog and share catalogs within the design team. A new TriBall tool allows the designer to dynamically position, link, and incorporate an object into an assembly. 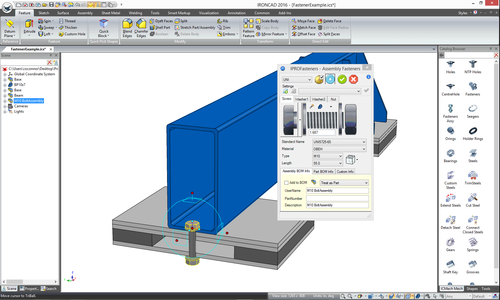 IronCAD has expanded its catalog of standard objects, which can change dynamically to fit the needs of a design.
(Source: IronCAD)

The new IronCAD adds a number of capabilities for working with sheetmetal. The designer can use a sketch reference line to design a sheetmetal corner or fold, convert an existing solid or surface to sheetmetal and continue to edit the part as if it were a native sheetmetal part, or define bend lines for press brake forming. The IronCAD catalog includes tanks and tank components that can be defined, shaped, resized, assembled, and otherwise customized, saving the designer from having to create a tank from scratch. The new mechanical add-on provides tools for piping, steels, flanges, intelligent fasteners, and other functions.

Collaboration tools have improved, said the IronCAD officials. Besides improving the 3D modeling environment, O'Connor said, the company is working on making its product more of a business solution, as well. “We believe you have to make the designer more productive within the company,” he told us. “You have to bring the customer and the sales teams into the design process.”

To that end, the new release provides tools for communicating with customers, suppliers, and other collaborators. The designer can produce photorealistic renderings, 3D and 2D PDFs, and Web-based models. A markup tool allows stakeholders to communicate back to the designer by adding comments and annotations and suggesting design changes, homing in on the exact feature, detail, or data point they want to comment on.

“We see that the whole collaboration between the designer and the business has to integrate better,” O'Connor said. “That's where we're going in the future.”