Clean diesel continues to be the fuel of choice for transportation authorities in major U S cities, in spite of competitive options aimed at reducing emissions, according to a nonprofit agency that represents diesel engine and equipment manufacturers.

While these orders are part of a general updating of old equipment, they also reflect the continued strength in clean diesel for transit vehicles despite competition from natural gas and other alternative fuel options, he said. 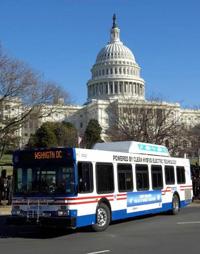 A clean diesel hybrid bus from the Washington Metropolitan Area Transit Authority sits in front of the Capitol building in Washington. A number of transit agencies from major US cities are updating their fleets with buses that use diesel fuel or have diesel-electric hybrid engines, according to the Diesel Technology Forum.
(Source: Diesel Technology Forum)

“There is a lot of chatter about alternative fuels and technologies, but at the end of the day transit districts are investing in the latest generation of clean diesel,” Schaeffer said in an interview with Design News. “Sometimes it’s a clean bus, or a hybrid bus. But it still is the most reliable choice.”

Among the recent orders for clean diesel buses and vehicles that use a combination of diesel fuel and electricity are the following:

While diesel fuel is not a green energy source, regulations in the US regarding this type of fuel changed in 2007, resulting in advances of clean diesel technology with the near-zero emissions, Schaeffer told us.

Since 2007, “in transit buses there has been a 98% reduction in particulate matter, or soot, and about the same in nitrogen oxides, which are a precursor to smog,” he said.

This kind of performance means that the use of diesel fuel is poised to grow in the US, not just for transit vehicles but also passenger cars, he said. Diesels make up about 3% of the total car and pickup truck population, but that is projected to grow to as much as 10% by 2020,” Shaeffer told us.

This trend is due not only to the cleaner nature of this type of fuel, but also because of an EPA requirement that manufacturers produce cars with a fuel efficiency of 52.5 miles per gallon by 2025. "Manufacturers are looking at diesel as an option so that they can have a bigger vehicle and still have fuel economy,” Schaeffer said.