Researchers affiliated with Boeing have produced what they claim to be the lightest metal ever made. It’s called “microlattice,” and the reason it’s so light is because it’s 99.99% air.

Sophia Yang, research scientist in architected materials at HRL Laboratories, a joint venture that Boeing is involved in with General Motors, calls it ”the world’s lightest material.” It’s an open-cellular polymer structure, made of interconnected hollow tubes, in three dimensions.

Yang compares its structure to bone, with a rigid skin and mostly hollow honeycomb interior. Bones are rigid and strong, as we know, but they also have a degree of flexibility due to the presence of collagen, and are relatively light. In the case of microlattice, the tubes that create the lattice structure are so thin, they look like tiny wires, with a wall thickness of 100 nm, which is 1,000 times thinner than a human hair. In HRL’s promotional image, a small block of the material is shown balanced atop a dandelion. 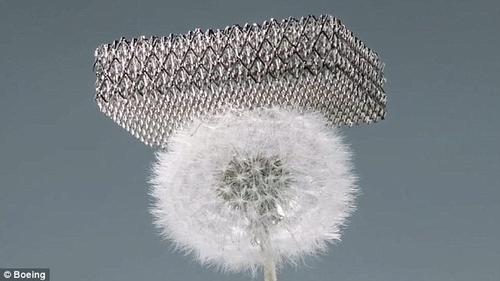 The material, besides being extremely light, has some remarkable mechanical characteristics. Among these are its ability to completely recover from compression exceeding 50% strain. It also offers extraordinarily high energy absorption.

Yang said in a video that in the classic student engineering challenge of dropping an egg off a 25-story building without breaking it, microlattice would require far less material than bubble wrap, which would result in a much smaller package.

The material, which was originally developed for the Defense Advanced Research Projects Agency (DARPA), could find near-term uses, from battery electrode and catalyst supports to any of a number of acoustic, vibration, or shock energy damping applications.

HRL says it will develop ultra-lightweight materials for future aerospace vehicles and structures under NASA's Game Changing Development Program. These materials could help reduce the weight of spacecraft by as much as 40%, which will be required for missions to Mars and beyond.

Sandwich-type panels could have the microlattice at the core and thin but stiff face sheets for the outer surfaces. Structures like this provide high torsional and bending rigidity at low weight and have become the standard for lightweight design in the aerospace industry.

Outer surfaces could use something like the carbon-fiber sheets developed for the Solar Impulse aircraft by the Swiss company Decision SA, which claims that they are likely the lightest ever made, coming in at 25 grams per squared meter, about one-third the weight of a sheet of paper. The sheets are also used in some of the America’s Cup racing boats for bulkheads and internal structural elements.

While foam or honeycomb type structures are used today, this microlattice material could provide better structural properties while providing lighter weight at the same time.