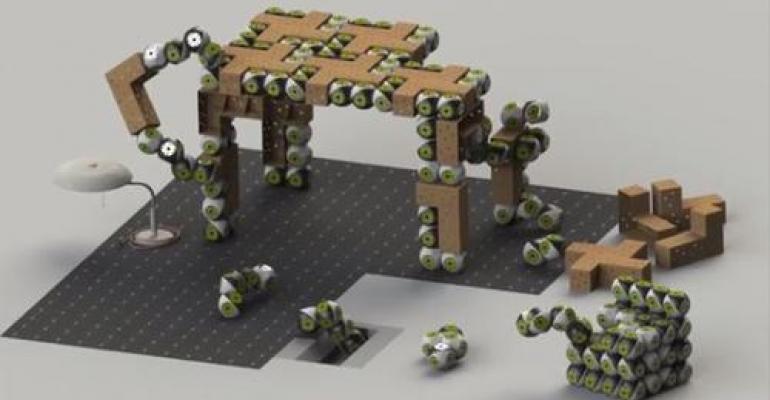 Researchers from the EPFL's Biorobotics Laboratory created the Roombot modules. Each module is 22 cm (8.66 inches) long and consists of two spheres with flattened sides that are joined together on one side. As lead researcher Auke Ijspeert, head of the lab, explains in the video below, each module is made of four half-spheres that can rotate against each other. A battery and three motors inside each module give it three degrees of freedom, allowing it to move and change its shape. A wireless link lets the modules communicate with one another. 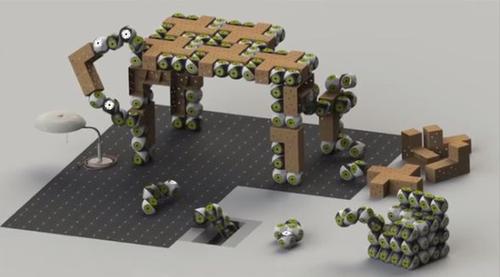 Each active module's outer surface has both active connectors or grippers (which can be extended or retracted like claws) and receptor holes to accept the grippers of another module. The grippers attach themselves and their modules to other active modules or to passive modules, which can be functional items such as lamps. They also can attach themselves to receptor holes in specially designed flat, passive surfaces that accept the Roombots' mechanical claws and act as anchors in the room. These flat surfaces are attached to other pieces of furniture or to the floor or walls.

Through their rotations and connections with other objects, the Roombots can form structures of various shapes and sizes, including stools, chairs, tables, desks, and couches. The robots can also form feet and wheels for another piece of furniture, such as a table or lamp, which can wheeled around to an elderly or disabled person. This is demonstrated in the video at the 1:38 mark, when the robots are shown slowly moving a table around a room. Such assistive technology is one of the main applications Ijspeert envisions for the Roombots. Another, he says in the video, is for artists and designers to design their own furniture.

"Eventually, all you'll need to do is program the layout of a bedroom or a conference room, then let the modules do the work," Ijspeert said in a press release. To keep costs down and make sure the structures are solid and stable enough, the team has focused on constructing hybrid furniture, which is made of both solid elements and active robotic modules. When not in use, the modules can form a wall or a box. They could be especially useful in places where furniture needs change frequently, such as a conference room or a space station.

The team is working on improvements such as faster speed, smoother and more optimized movements, improved algorithms for determining the sequence of motor actions, and a variety of user interfaces for designing a room's layout, such as a tablet.

The researchers have published their work in Robotics and Autonomous Systems (subscription required). You can see more photos and movies of the Roombots on this page of the Biorobotics Laboratory's website. The research was funded in part by the Swiss National Centre for Competence in Research Robotics.