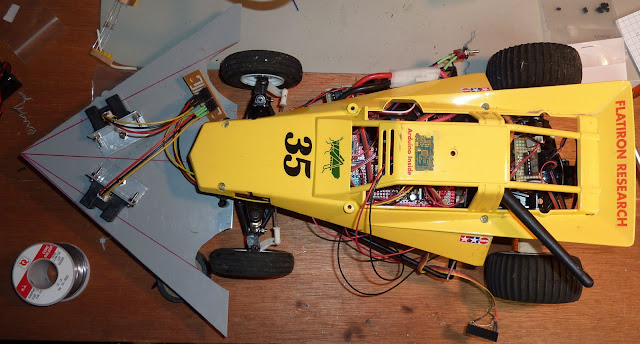 Last month Sparkfun held their Autonomous Vehicle Competition (AVC).  This event looks like a blast and if it weren’t 1000 miles away you can bet I’d be there.  The competition is held at SparkFun HQ in Boulder, Colorado.  The contest is pretty simple:  The vehicles have to be autonomous, and they have to drive completely around the SparkFun building.  There isn’t an official course, but there is a time limit of 5 minutes.

The course included a “bonus arch” that would get you a 30 second time deduction if your entry drove through it, and there were also large barrels placed around the course  as obstacles.

The winning entry for the ground class was Scott Harris and his entry named “Tobor”.   Scott has a great series of articles on his blog about his car and how he designed it.  He started with a Tamiya Grasshopper chassis and uses two Arduinos (Mega and Nano) to control it.  The control is pretty sophisticated:  Tobor incorporates a GPS receiver, encoders on both rear wheels, compass, and gyroscope.  These readings are all fed into a Kalman Filter which produces an estimate of the car’s position.  His car also includes an XBee RF module to enable full remote telemetry.

Harris programmed four waypoints corresponding to the corners of the building, and the Mega does the calculations and control necessary to  drive past all four waypoints.  The Nano has the simpler job of monitoring the R/C receiver and switching control between the Mega and the RC transmitter.  AVC rules require a remote override for safety.  It’s also a smart idea because there’s a pond right next to the parking lot, and every year someone wins the “Water Hazard” award for driving into it.

Harris also added 5 ultrasonic sensors to his car for collision avoidance.  This is also a smart idea because the ground competition starts multiple contestants at once and for some reason it appears that autonomous vehicles are attracted to each other. However these proved to be a failure at the track and were not used.

Over at SparkFun you can find the AVC recap video.  Take a look, it’s pretty entertaining, especially the electric wheelchair entrant that was dressed up like a Tyrannosaurus Rex.