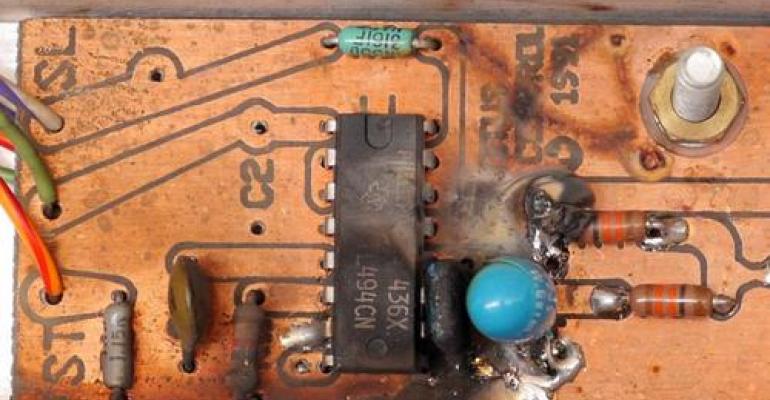 Years ago my pal Steve Titus wanted to experiment with some drone rotor designs. He needed a simple motor controller that could operate from 8V to 12V and deliver amperes of current to a DC motor used in radio-controlled aircraft (figure 1).

I whipped out a design based on the classic TL494 PWM (pulse width modulation) chip (figure 2). This Texas Instruments chip is second-sourced by ON Semi, as well as others. Distributors carry the chip in small quantities with pricing from 24 cents in 1000s to 60 cents each (2016). I learned to love this chip when I consulted to Teledyne. I designed power supplies for radar jammers on F-16 fighter jets. The TL494 came in a ceramic DIP package so you could use it on mil-spec projects or for ultra-reliable industrial applications. These days I would design in an SOIC for the small size and vibration resistance. The part even comes in TSSOP for micro-miniaturization.

To get the large amperage Steve required, I had the chip drive a large TO-3 metal-can PNP Darlington transistor that can handle 100V and 16A. Since the inductance of the motor and the wires connected to it could generate switching spikes even higher than 100V, its necessary to put a robust clamp diode across the motor (figure 3).

Figure 4; The circuit applies pulses to the motor (red). This is based on the control voltage reaching a set threshold (yellow). The current into the motor gets up to 4 Amperes, and then falls through the off-time (green) . Small oscillations in current are due to the inductance of the motor and wiring interacting with the capacitance of the snubbing diode. 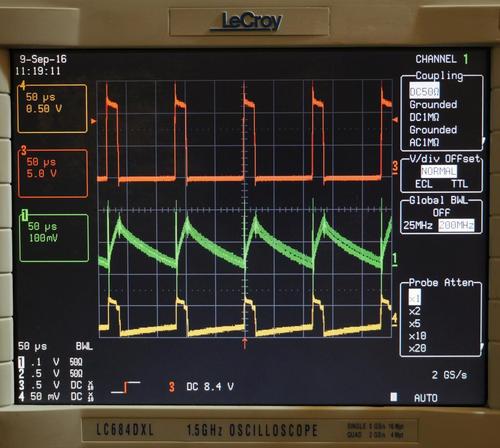 You effect motor speed control by chopping the DC input voltage into variable-width pulses. I picked C3 and R5 to give an operating frequency of 8.7kHz. If the IC doesn't chop at all, it applies full battery voltage to the motor. If it applies brief narrow pulses to the motor, the average voltage is low, and the motor runs slowly (figure 4). With pulses that are vanishingly narrow there is no voltage applied to the motor, and it stops rotating. With no load on the motor, the voltage waveform can look squirrely as the back-EMF (electromotive force) of the motor creates voltage as a generator.

While it might appear brutal to apply these pulses to the motor, remember that motors run on magnetism and magnetism is made with current, not voltage. So while the controller apples voltage pulses, the motor inductance turns this into current ramps that are proportional to the voltage.

For mechanical design I bought some heat sinks at a salvage yard that were already drilled to mount a TO-3 transistor. I used mica insulators and thermal grease when I mounted them. The studs from the transistor mount also spaced off and mounted the circuit card. I also picked up some 10 kilo-ohm slide pots at the salvage yard. I laid out the board in ProCAD. To make the circuit board I used pre-coated boards that I applied transparencies from my laser printer. Once the photo-resist was exposed, I plopped them in a tray of heated ferric chloride. 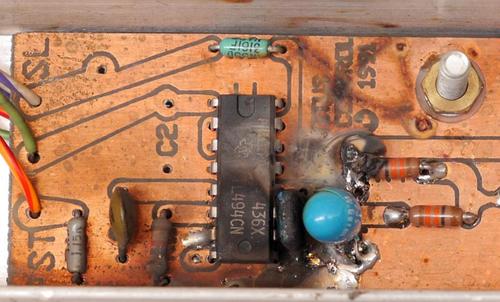 Regrets, I've had a few. Today I would use a surface-mount chip, and not use any tantalum or electrolytic capacitors for the best reliability. There is no other way to get the power of a TO-3 transistor on a big metal heatsink. But this was a tremendous over-design. Next time I would look at using a low-on-resistance MOSFET so I would not need the metal heatsink or the TO-3 case. A surface mount D2PAK is equivalent to a TO-220 package, and soldered to a hand-sized circuit board should be able to take away the heat. Big downside here is that the circuit board would not be isolated from the transistor drain, so maybe a TO-220 or TO-3 case with an insulator would still be a good idea.

I also would just order the PCB from a decent quick-turn fabrication shop rather than messing with photo-resist PCB material and transparencies and ferric chloride. At some point it is just easier to have the boards made, especially now that I know the basic design works OK.

Another regret I learned the hard way. I once designed a prototype with salvage yard parts to get it to the customer as soon as possible. He loved it and asked for 50 more. When I went back to the salvage yard they did not have those quantities available. They had no idea where to get more of the same parts. Now I stick with main-line distributors like Allied, so I know I can get as many parts as I need, they are not counterfeit, and my fellow engineers and hackers can order the exact same parts. Reproducibility is an essential part of the scientific method. The BOM (bill of material) below has available parts rather than the salvage yard heatsink and pot and other parts in this prototype.

My final regret is not making it really really clear to my friend Steve that everybody knows the red wire goes to the plus terminal of the 12-volt battery. He promptly hooked it up backwards and blew up one the prototypes before any use (figure 5). Thankfully I have learned to make 3 prototypes. Two that I can compare design changes and one that Marketing steals and ships to a show in Kirghistan.

Click here to download the full build instructions, including ProCAD PCB files as well as DXF and DWG versions.

Do you have a cool, original, homemade gadget collecting dust in your garage? Give us the details at DesignNews.com/GF, and you may receive $500 and entry into our Gadget Freak of the Year contest!

[All images via Paul Rako, unless otherwise noted]