Flexible Solar Cell Can Be Woven Into Energy-Harvesting Fabric 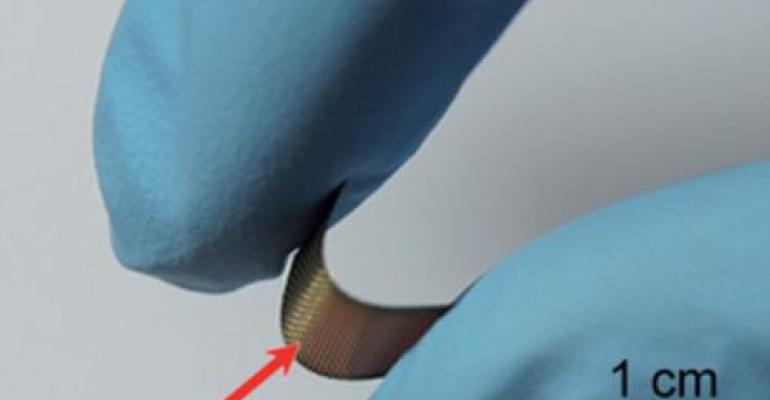 Many scientists have been working battery-free ways to power wearable electronics that can replace bulky battery packs, particularly through the use of energy-harvesting materials. Now a team of researchers in China have upped the game by developing a lightweight and flexible solar cell that can be woven into two-way energy-harvesting fabric.

Developed by researchers led by Huisheng Peng, professor of macromolecular science at Fudan University in China, the invention is a polymer solar cell textile that can harvest energy from either side and has an energy-conversion efficiency that varies less than 3% after bending for more than 200 cycles, researchers said.

"It is predicted that wearable technology will result in a revolution in the world," according to the website of the Peng Lab at the university. "However, the advancement has been limited by a critical challenge, i.e., the conventional power systems cannot satisfy the requirements of lightweight, miniature, and integratable in wearable electronics." 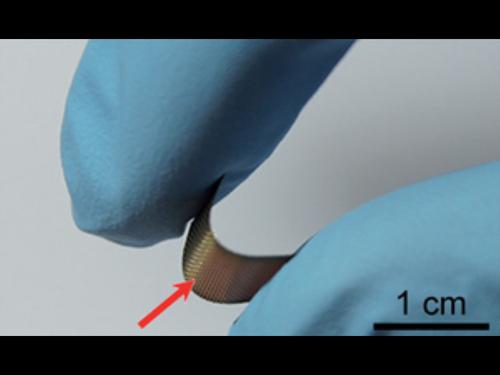 Cells like the one developed by Peng and his team could change all that. The tiny solar cell -- which is only about the size of a fingernail -- is comprised of a metal textile electrode made from micron-sized metal wires that are used as the cathode. The surfaces of the metal wires were dip-coated with the photoactive layers, according to an abstract of a paper Peng and fellow researchers published in the journal Angewandte Chemie.

Researchers coated two ultrathin, transparent, and aligned carbon nanotube sheets that, according to them, exhibited "remarkable electronic and mechanical properties" onto the modified metal textile at both sides as the anode to produce the polymer-based textile. This sandwich structure allows the cell to have two-way energy conversion, researchers said. The cell also is extremely flexible, lightweight, and easy to manufacture. One drawback, however, is that it currently only converts about 1% of sunlight into energy.

The cell also is notable because it uses perovskite, a relatively new material that's being used to develop solar cells. Perovskite is a calcium titanium oxide mineral composed of calcium titanate and has advantages for solar-cell production, including higher efficiency and lower cost.

Peng and his team aren't the only researchers working on flexible energy sources that can be woven into fabric to make wearables more lightweight and eliminate the need for a potentially bulky battery. An international team led by researchers Tao Chen and Liming Dai recently developed a new type of flexible supercapacitor that can be woven into clothing and power everything from wearable medical monitors to communications equipment. The invention can be woven into long fibers up to 50 feet while maintaining a charge/discharge rate that outperforms even the best lithium-ion batteries, according to researchers.

In addition to the flexible solar cell, Peng and fellow researchers also are developing a number of other flexible energy sources, including electrochemical capacitors and lithium-ion batteries, for wearable electronics. While the technologies so far have low energy output, their advantages are that they are ideally suited for clothing and other textiles that feature integrated electronics because they are flexible and lightweight.

Peng and his team continue their research to improve these technologies for greater scale and to create commercially viable products that can be mass produced. They also aim to add functionality such as sensing and luminescence to their power sources, according to the Peng Lab website.