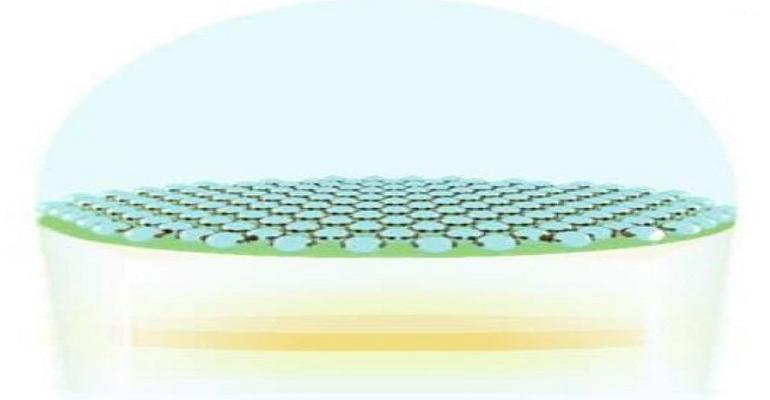 Illustration of a nanoparticle layer envisioned by researchers for use within an LED to stop reflections from the casing to limit light emission and cause more rapid degradation of the chip.
Solution could help boost the lifetime of LED devices and make them more energy-efficient.

Researchers have discovered that using nanoparticles strategically in LED designs enables the production of more light for the same energy as well as boosts their lifetime, providing benefits for the manufacturers and users of this technology.

A team from Imperial College of London and the Indian Institute of Technology (IIT) Guwahati modeled the impact of placing a two-dimensional (2D, or single layer) of nanoparticles between the LED chip, which produces the light, and the transparent casing that protects it.

In current LED designs, the casing is necessary to ensure the chip does not get damaged. However, it’s a technological tradeoff, as it can cause unwanted reflections of the light emitted from the LED chip, meaning not all of the light generated is emitted.

It’s a problem scientists have tried to tackle in the past, said Debabrata Sikdar, a professor at IIT Guwahati who was formerly a fellow at Imperial College.

“While improvements to the casing have been suggested previously, most make the LED bulkier or more difficult to manufacture, diminishing the economic effect of the improvement,” she said in a press statement.

While the solution the team discovered is still theoretical, it seems effective, researchers said. Their models showed that adding a layer of finely tuned nanoparticles could reduce the reflections and allow up to 20 percent more light to be emitted.

Moreover, the solution also could help resolve another issue LEDs have due to the reflections, which is that they increase heat inside the device and degrade the LED chip faster, Sikdar said.

“We think that our innovation would make LEDs brighter, more energy-efficient, and durable,” she said in a press statement.

Researchers also performed fundamental theory and optimization analysis on the effect of the nanoparticles, concluding that it has the potential for seamless integration into the current manufacturing process for LEDs.

The team published a paper on its work in the journal Light: Science & Applications.

The next step will be to move from theory to prototype by developing an LED device with a nanoparticle layer so they can test the best configurations predicted by the theory. These include the size, shape, material, and spacing of the nanoparticles, as well as how far the layer should be from the LED chip for optimal performance.