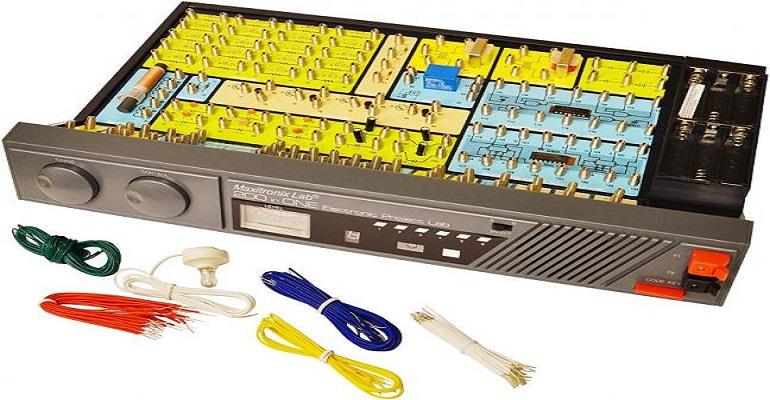 Some kids want to be firefighters when they grow up. Others want to be dancers, actors, musicians, or teachers. When I was a kid sprouting up in England, I always wanted to be an engineer and work with robots and spaceships (or an artist, whichever came first).

My mother and father were wonderful people, and I had what I now recognize as being an idyllic childhood. Before I was born, they had an agreement to “never argue in front of the kids.” As a result, I didn’t even know that they disagreed about anything until I was about 18 years old. Sad to relate, neither of them had an engineering bone in their body. Meanwhile, my teachers at school were focused on teaching me things they felt to be critical to my future success, like the typical annual rainfall in Kiribati or the main exports of Tuvalu (spoiler alert – there aren’t any).

As a result, I was largely left to fend for myself on the engineering front. This resulted in a number of unsuccessful experiments, such as attempting to measure the thrust of a homemade rocket, which ended up decimating the contents of my friend’s garage before exiting through the roof. His parents remained stoically unimpressed by the fact that we had protected ourselves behind a wall of sandbags. They made us return the contents of the sandbags to the play area in the garden before calling my mother to inform her my presence was no longer required and that if they never saw me again it would be too soon (I’m sure they said it with love). 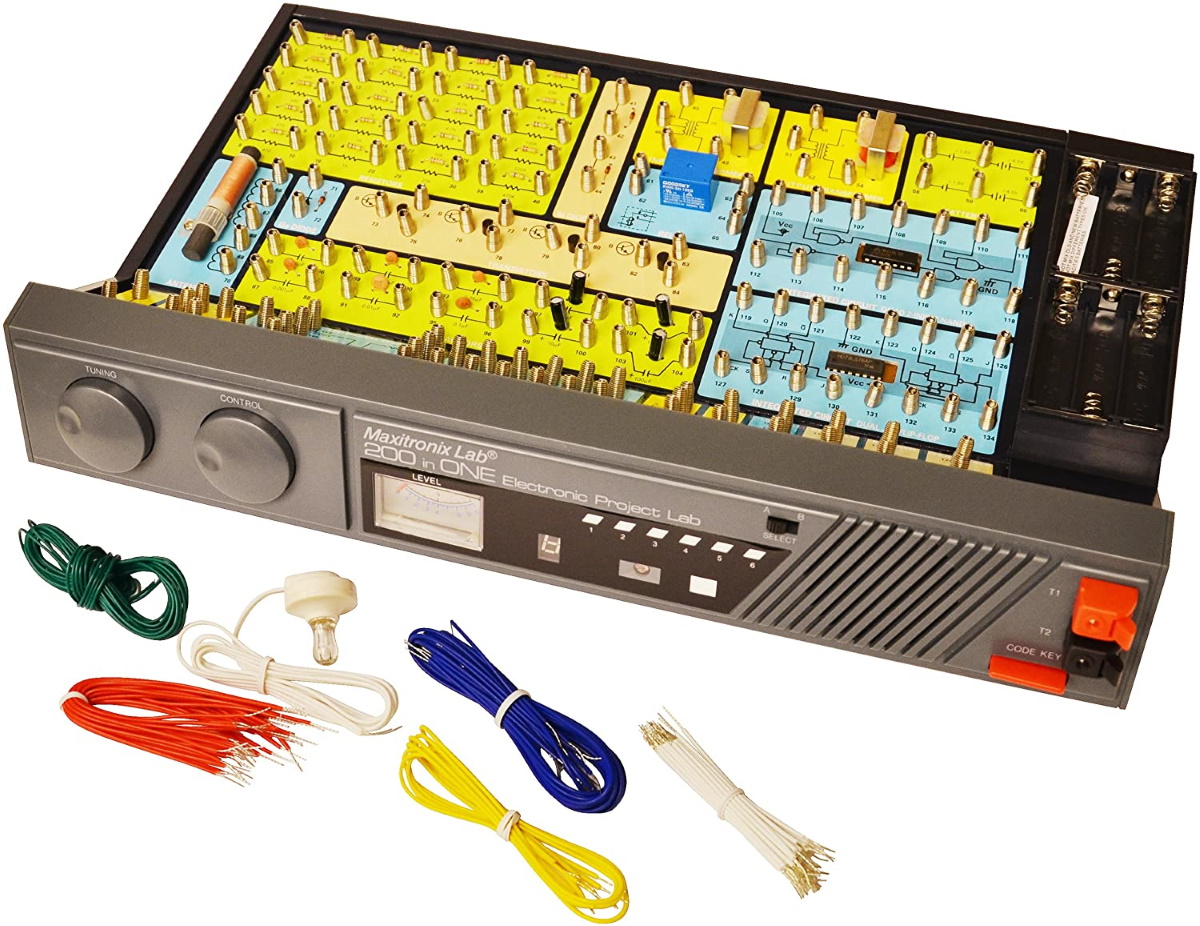 The 200 in One Electronic Project Lab

When I was about 12-years old, my parents gave me an electronics kit that involved a number of simple components that you connected using wires that were held by springs. This was in the late 1960s, so my kit was probably a forerunner to the classic 65 in 1 Electronic Project Kit that was in widespread use by the early 1970s. I just had a quick Google while no one was looking, and I found a modern equivalent on Amazon in the form of the 200 in One Electronic Project Lab from Maxitronix (no relation).

I know nostalgia isn’t what it used to be, but I have an incredibly strong urge to order one of these little beauties and spend a happy weekend making interesting circuits that whistle and warble -- the sort of sounds that drove my dear old mother to distraction (especially once I discovered how to replicate the sound of someone calling in on our household telephone).

While I was a student at university in the late 1970s, I used to avidly read hobby magazines like Practical Wireless and Practical Electronics (I never dreamed that I would one day find myself writing a monthly “Cool Beans” column for the latter). I remember seeing an advert for a single board computer in one of these magazines. This bare-board implementation (i.e., there wasn’t a case) had an 8-bit microprocessor, 1 KB of ROM (for the monitor), 1 KB of RAM (for the user), a hexadecimal keypad augmented with a few control buttons, and a handful of 7-segment red LED displays to present address and data values. I drooled with the desire to lay my hands on one of these little rascals, but at around 100 UK pounds, it was totally outside anything I could afford. I used to cry myself to sleep thinking about it (I still do).

Recently, I was introduced to the mini-micro designer (MMD) boards in the form of the MMD-1 and MMD-2. Based on the 8-bit Intel 8080A CPU, these development systems were introduced by E&L Instruments Inc. in 1976 and 1977, respectively. I just saw this video on YouTube, which provides a really great overview to the MMD-1.

Oh, my goodness gracious me. I cannot believe that it even came equipped with a breadboard area. If only I had owned one of these little scamps back in the day, I would have been in seventh heaven.

So, what do young folks who want to learn about things like electronics and computers have available to them today in the 21st century? If the hope is to prepare our youngsters for a connected artificial intelligence (AI), augmented reality (AR), Internet of Things (IoT) world, then I don’t think that linking resistors and capacitors using wires held by springs will “cut the mustard,” as it were.

Well, I just ran across a crowd funded Kickstarter project for something called the CrowPi2 (this is the next generation of the original well-received CrowPi). As you can see in this video, the CrowPi2 is really rather tasty.

This bodacious beauty is firmly targeted at an audience interested in learning about all things STEM (science, technology, engineering, and math).

Initially, it gives the impression of being a small-ish standard notepad computer with an 11.6” screen (1920 x 1080 resolution) along with a built-in microphone, stereo speakers, and 2-megapixel camera. It’s only when you remove the detachable wireless keyboard that the goodies are revealed.

Located under the keyboard are 22 onboard sensors and modules that are accompanied by a wealth of quick-start projects and a treasure trove of educational resources.

The CrowPi2 is based on the most current version of the Raspberry Pi (Raspberry Pi 4B). Although Pi hardware is not itself open, the Raspberry Pi operates in a vast open source ecosystem. In addition to multiple open source games – and who amongst our number can resist playing the occasional game – the CrowPi2 comes with the software installed to help users learn Scratch, Python, and Minecraft. It even comes with step-by-step instructions to create a “simple” AI/ML-based facial recognition app.

From the Kickstarter, I see that an Early Bird CrowPi2 Starter Kit costs around HK$2000, which equates to around US$250 (if I round exuberantly). Typically, the cost of an electronic product in the UK is the same number of UK pounds as that product costs in America in US dollars.

If I take a step back and think about this, it blows my mind. A little over 40 years ago, I couldn’t afford a single board computer with 1 KB of ROM, 1 KB of RAM, a few buttons, and a few 7-segment LED displays for 100 UK pounds. Today, I can buy a STEM student’s dream machine in the form of a CrowPi2 for around 250 UK pounds, which would have been only 50 UK pounds back in 1978.

And you tell the young people of today how lucky they are...and they don’t believe you (as the Four Yorkshiremen might have said in the classic Monty Python sketch). How about you? What type of resources did you have to help you learn electronics and computers as a kid? Might you be tempted to invest in a CrowPi2 for yourself? Or do you have any younger family members who might enjoy this tasty treat?

Clive “Max” Maxfield received his B.Sc. in Control Engineering from Sheffield Hallam University in England in 1980. He began his career as a designer of central processing units (CPUs) for mainframe computers. Over the years, Max has designed all sorts of interesting “stuff” from silicon chips to circuit boards and brainwave amplifiers to Steampunk Prognostication Engines (don't ask). He has also been at the forefront of electronic design automation (EDA) for more than 30 years.