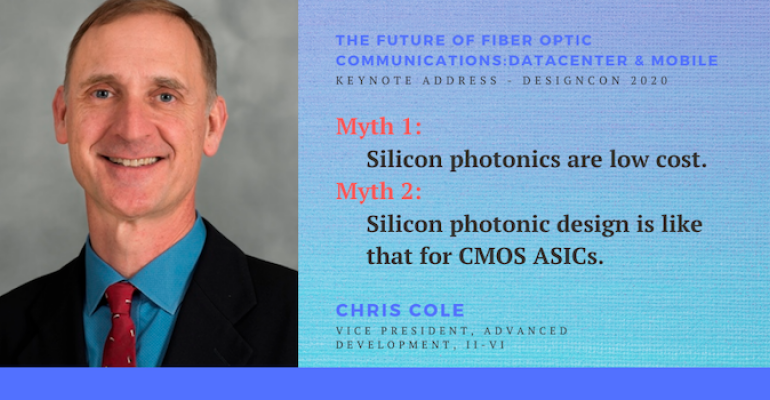 The need for data center optics is real, but silicon photonic chips may not provide the answer.

The coming of silicon photonic technology in the datacom and telecom industries has been foretold for the last several decades. Indeed, replacing copper wires with fiber optics and silicon photonic interfaces has been occurring in these markets, just at a slower pace than predicted.

Chris Cole, VP of Advanced Development at II-VI, challenges the expectation of a wide-spread replacement of copper wires with silicon photonic interfaces. During his keynote at DesignCon 2020, Cole went so far as to call this expectation a myth.

Unfortunately, there is reason to doubt that silicon photonics can meet those needs. First of all, silicon is an indirect band-gap semiconductor, so it’s a lousy light amplifier, explained Cole. This reason, in turn, made Si lasers extra lousy as light amplifiers, (remember that the LA in Lasers stands for Light Amplification). Further, silicon photonics has higher signal/data loss than other technologies like free space optics. Finally, while silicon photonics packaging has been comparable in cost to conventional packaging, it has only just been on par without any additional motivating factors to improve its viability.

If silicon photonics has inferior performance capabilities to conventional datacom transceivers, why has the first myth been put forth?  Cole explained that if you can’t sell on value, then you need to sell on price. Low cost was the only marketing claim that could be made for silicon photonics.

The second myth was that silicon photonics is like any other CMOS ASIC chip in terms of development and cost. To counter this myth, Cole argued that the two largest ASIC CAE companies (e.g., Synopsys and Cadence) had revenues (~$5.5B) similar to the entire Datacom optics industry. Further, the true cost of just developing process design kits (PDKs) for advanced CMOS nodes is comparable to the entire R&D budget of an optical transceiver vendor.

To provide a balance view, Cole acknowledged the counter point to his Myth 2. With proper investment and effort, silicon photonic tools can give good results. He cited as an example the 40Gb/s and 56Gb/s TX eyes, part of the Finisar 400G DR4 SiPIC prototype from 2014. [Disclaimer: Cole did work for Finisar in the past.]

In conclusion, Cole summarized that quad channel silicon photonic transceivers fundamentally have no advantage over conventional quad transceivers. The current stampede of 400G DR4 QSFP-DD SiPh transceiver designs from Intel, Cisco/Luxtera, Cisco/Acacia, Elenion, (Finisar before dropping out), and other smaller companies will result in no ROI on investment. In other words, “me too” products don’t bring market success.

To be successful, silicon photonics must deliver performance enabled by large scale photonic integration, and something not possible with conventional optics. The technology has to be about value, not price, emphasized Cole.