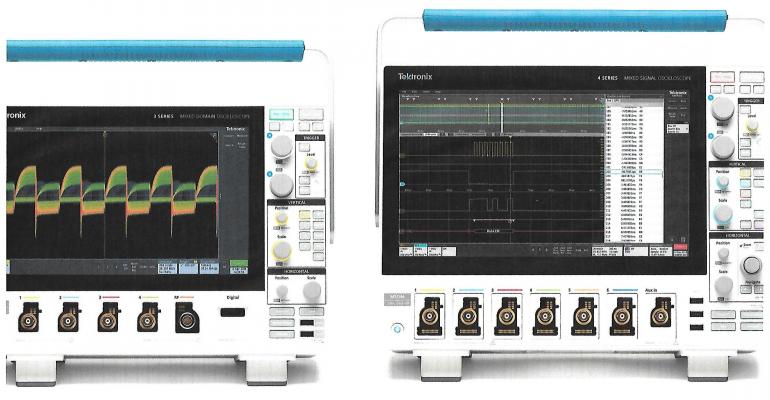 A pair of new mid-range oscilloscopes with big high-definition touch screens promises to simplify development of embedded products, ranging from televisions to IoT- and radio-based devices.

The new 3 Series MDO and 4 Series MSO are being targeted at development engineers that have a growing need to see more signals simultaneously, as electronic products become more complex and deeply integrated. “Traditionally, a scope would have shown two, or maybe four, analog traces on a screen,” noted Dave Slack, product marketing director for Tektronix, Inc., maker of the new scopes. “But anymore, that’s just not enough.”

The decision to move to the big, HD screens was based on hundreds of customer interviews around the world by Tektronix engineers. Increasingly, the company said, product developers were saying that the greater complexity of electronic devices was driving a need for more on-screen information.

“There was a time when electronics were built from discrete components,” Slack said. “Radios had individual resistors, capacitors, inductors and an antenna. But nowadays, a radio is a single chip with 8 or 16 bits of digital data going in. And there may be different power voltages going in, along with RF information.” Customers told Tektronix engineers, not only that they needed to see the multiple streams of analog and digital information, but that they needed to view them simultaneously, Slack said.

An industry analyst told Design News that the decision to go with big HD touch screens may also be important for cultural reasons. “Having those big high-resolution screens – that’s what people are used to,” noted Bob O’Donnell, founder of Technalysis Research, LLC, a market research and consulting firm. “When you have an old touch screen, even on your phone, it becomes hard to use. But by moving up to a big, high-resolution touch screen it becomes more intuitive for everyone.”

O’Donnell added that the combination of mid-range cost and large HD displays may appeal to a growing new swath of product developers. “Especially as you get into the IoT, there’s a whole range of new companies that are having to test electronics that they never had to worry about before,” he told us. “So the screen – and the way you can interact with it – will be important to a lot of engineers.”