Raspberry Pi Is a Trip Back to the '80s 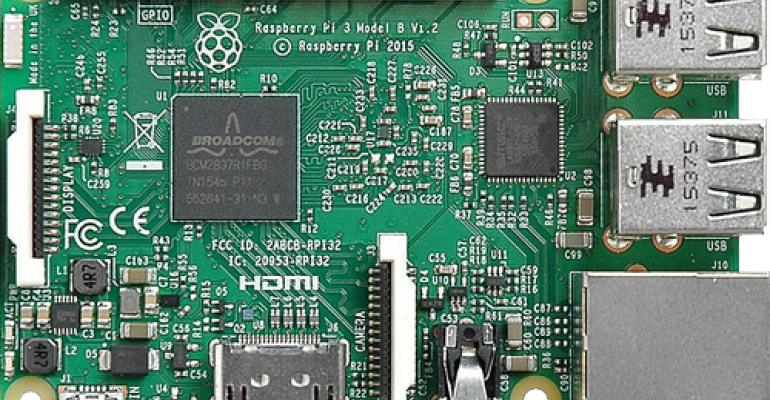 Raspberry Pi was launched to correct a problem. Cambridge was seeing applications for its computer science program fall off. The applications were sinking dramatically. In the late 1980s, 800 students would typically apply for the 80 positions. Yet by the mid-to-late '90s, the number had dropped to 200. Eben Upton, a young Cambridge professor who had been a student in the program, thought that dramatic downward trend needed to be reversed in order to shore up the computer science program.

Upton’s concerns about the trend and his efforts to reverse it prompted him to create the Raspberry Pi, a small inexpensive computer. It was launched five years ago with a $25 price tag. It’s more powerful current version sells for $35. At a keynote talk at the ARM TechCon conference last week, Upton explained his analysis of the downward trend and how he hopes his tiny computer might reverse it.

It comes down to a kid’s ability to program a computer. “We had a world in the 1980s where a lot of people had some programming experience,” said Upton. He was referring to early personal computers such as the TRS-80 from Tandy and the Apple II, both of which lent themselves to individual programming. “People were hobbyists with these computers, and that meant students at Cambridge ended up with a basic fundamental understanding of programming.”

So Upton decided to create a programmable computer that would be affordable for students and still have enough power to be intriguing to those students over the long run. “We decided to create a computer that was programmable. That was in 2006. For the first five years we were doing prototypes,” said Upton. “We wanted to start with something that was basic enough for a child. But we also wanted it to have enough power so the kids could stay with it.”

Named After the Thhpptpt! Sound

As the idea developed, it was time to come up with a name. “We chose the name raspberry because it was a fruit name -- like Apple,” said Upton. “We also liked the sound of the “raspberry” we make with our mouth. Kids like body sounds. The Pi part comes from the number.”

To test the waters for interest, Upton and his team of volunteers made a video that demonstrated the tiny computer and put it out on the Internet. “We debuted it on YouTube and it got 600,000 views,” said Upton. “So we promised 600,000 people we were going to offer a $25 computer. In reality, we had no idea how to do it.”

The original goal for production of the Raspberry Pi was 10,000 units. “We raised enough in financing to build 10,000. We decided we could sell those and build more,” he said. Even so, the 600,000 views on YouTube gave Upton pause. Maybe the demand would be greater. His suspicions were confirmed. “When we starting selling it, we received orders for 100,000 in one day,” he said. “It was an amazing day. Now we’re four-and-a-half years in and we’ve sold 10 million. We’re now on Raspberry Pi 3.”

Getting Programming to Trend Again

Upton has no control over who buys the computers. The hope is that it will get into the hands of students. “At first the computers went to people like us. In the next year, it was hobbyists,” said Upton. “Then it became schools. The tone of the comments changed then. The comments started coming from teachers who were showing us what their students were doing.”

Over the years, interest in Raspberry Pi has exploded. The tiny computer has attracted a wide range of support. “The important part is the community. We have an army of volunteer engineers giving their time, risk capital, and open source software,” said Upton. “Without them, Raspberry Pi would never have left the drawing board.”

The Raspberry Pi organization itself has grown steadily but cautiously. “We sold more than 800,000 before we hired our first employees. We now have 70 people working,” said Upton. “We began as a voice in the wilderness. Now we work alongside dozens of organizations. We have corporate sponsors that include Google, Oracle, and ARM. We’ve spawned a community of start-ups. People are building businesses around Raspberry Pi.