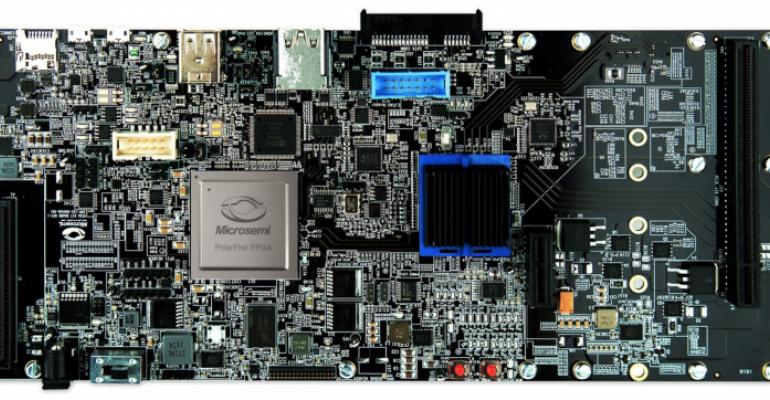 The HiFive Unleashed Expansion Board, released by Microsemi, offers developers the potential to build personal computers around open-source RISC-V processors.

SiFive's HiFive Unleashed, a development board based on the open-source RISC-V architecture, is getting an upgrade that could attract personal computer developers—and someday even makers and hobbyists—to open-source hardware. Semiconductor company Microsemi has released an expansion board that allows developers to add custom peripherals to the board via PCIe, USB, and other connections. This opens the window for the potential of personal computers to be built around the HiFive Unleashed, creating a PC with an open-source CPU at its core.

The HiFive Unleashed is the first open-source RISC-V SoC that supports Linux. It combines SiFive's Freedom U540 RISC-V processor, a 64-bit, 4+1 multicore processor that fully supports Linux, as well as other operating systems, such as FreeBSD and Unix. The board features 8GB of DDR4 with ECC, a gigabit ethernet port, 32 MB of quad SPI flash memory, a MicroSD card slot, and an FPGA mezzanine card (FMC) connector, courtesy of Microsemi's PolarFire FPGAs, for allowing peripherals and other expansion devices to be attached to the board. Microsemi's new HiFive Unleashed Expansion Board adds several more features, including a PCIe root complex, a SATA port, M.2 SSD port, two USB ports, an HDMI connector, DDR4 memory expansion, an embedded multi-media controller (eMMC), managed NAND Flash, and a secure digital card slot.

"Working together with SiFive to accelerate the growth of the RISC-V instruction set architecture (ISA) and our Mi-V ecosystem, the HiFive Unleashed Expansion Board and HiFive Unleashed development board give the broader Linux market an extremely robust platform for RISC-V development," Ted Speers, head of Product Planning for Microsemi's Programmable Business Unit, said in a press statement. "Our cost-optimized, lowest power, mid-range PolarFire FPGAs are an ideal solution for embedded development engineers to implement custom peripherals."

Jack Kang, VP of product marketing at SiFive, told Design News a RISC-V PC is certainly viable from a hardware standpoint. “With the HiFive Unleashed and the HiFive Unleashed Expansion Board, we already see almost all the elements there today,” Kang said. “In fact, since the HiFive Unleashed launched at the end of March, we have seen significant progress in the open-source community, including major ports from Debian covering nearly 80 percent of all Debian Packages available.”

With Debian Linux functioning as the operating system, a user could potentially create a RISC-V PC using the HiFive and Expansion Board that runs a graphical interface similar to what any Windows PC or Mac user is accustomed. But it would come with the added benefit to developers and more savvy users of being open source and having a large, readily available software library including productivity tools, web browsers, and even games.

“It’s super exciting what the open-source community is able to do,” Kang said. "I used to think that software would be a major barrier to a viable RISC-V PC. But the community continues to surprise, so perhaps it’ll happen sooner than I thought. With the Debian work, a Debian PC is quite viable now.”

At $1,999 and $999, respectively ($2,998 for a bundle), the Expansion Board and the HiFive Unleashed both come at price tags that won't see them competing with a less than $100 Raspberry Pi or Arduino any time soon. But it does open up an interesting discussion around RISC-V's potential for consumer computing applications—particularly if price points come down. Spending a few grand on a custom PC is not unheard of in DIY and hobbyist circles. What it may ultimately come down to is how well the idea of open-source hardware is embraced by the community and if RISC-V processors can compete or offer new features that standard options cannot. Open-source software has demonstrated its demand and viability for decades now; perhaps open PCs can do the same for hardware?

“At SiFive, we are all about building custom silicon and cores for our customers. So if they want to keep pushing the boundaries in enabling a RISC-V PC, we’ll certainly be there to support them,” Kang said. “Ultimately, the RISC-V revolution is about enabling everybody to contribute to the product. Once we enable the whole world to build products, we’ll see innovation in ways we cannot even imagine today.”

Would you try a RISC-V PC or even build one yourself? Share your thoughts in the comments!