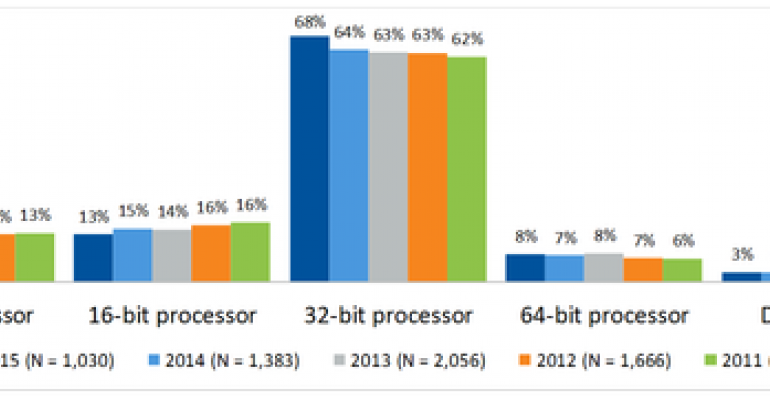 The Embedded Market Study solicits responses from readers of Design News' sister brands under UBM, including EBN, EDN, EE Times, Embedded.com, and Planet Analog. The survey itself was developed and managed by an independent research company and covered a variety of topics. Findings include types of technology used, all aspects of the embedded development process, IoT emergence, tools used, work environment, applications, methods/processes, operating systems used, reasons for using chips and technology, and brands and chips being considered by embedded developers. The study is adjusted each year, but many of the questions are repeated in successive studies so that trends over three to five years get revealed.

One of the important changes in this year's study has to do with demographics. Nearly 40% of the respondents reside in the US and Canada, with about 26% each for Europe and Asia. This represents a near doubling of the Asian developers represented, which highlighted some significant regional differences in several areas.

One such difference relates to experience levels. On a worldwide average, the study's respondents have been out of school for more than 20 years. The Asian component, however, is much younger, averaging 12 years out of school. Asian developers also put greater effort than average into maintaining or improving their professional skills, spending more days in career training, as well as reading more books and technical journals.

The situation that developers find themselves in is fairly common, however. On average, more than half of current development projects (56%) involve upgrading or adding features to existing designs rather than creating something entirely new. Development project team size (including QA, test, and systems integration engineers) has held steady at around 14 engineers, typically working on at least two projects simultaneously. Engineering resources are split roughly 60/40 in favor of software over hardware. Industrial control is the most common application space teams are working in, followed by consumer and communications, although the IoT has grown substantially since last year (12% to 19%) to round out the top four.

Despite all the labor savings that new tools and products are offering, development teams stand a fairly high chance of missing their schedules. As Figure 1 shows, some 70% of development teams had a development cycle of 12 months or less on their last projects, and only 38% of teams finished on or ahead of schedule. And the schedule shortfall has been growing over the years, even though more than half of teams now start their projects with an off-the-shelf development board, 36% purchase rather than developing their own hardware, 71% re-use some of their hardware designs, and 86% re-use some part of their previous code. (The most popular language is C, used by 60% of teams worldwide and 74% of Asian teams.)

As seen in Figure 2, teams worldwide are fairly consistent in how they allocate their time during the development project. After the detailed design effort (about 30% of the time spent), most of the other development energy went into testing and debugging. This breakdown has remained steady for the last several years. 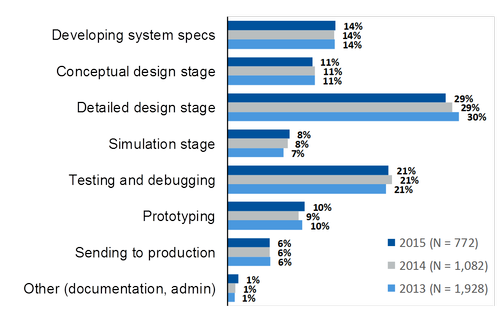 As might be expected from past results and the amount of time dedicated, schedule and debugging are two of the greatest concerns in the development community, affecting one in four teams. Perhaps surprisingly, though, the desire for better debugging tools is ebbing. When asked what one thing they would like to improve in their development activities, only some 18% of respondents pointed to debugging tools. While this is still the leading request, its significance has declined from 29% five years ago. On the rise over that same time period, and poised to take over the top spot among development team concerns, is worry over the team's skill level. The desire for improvements in the team has nearly doubled from 9% to 17% of respondents since 2010.