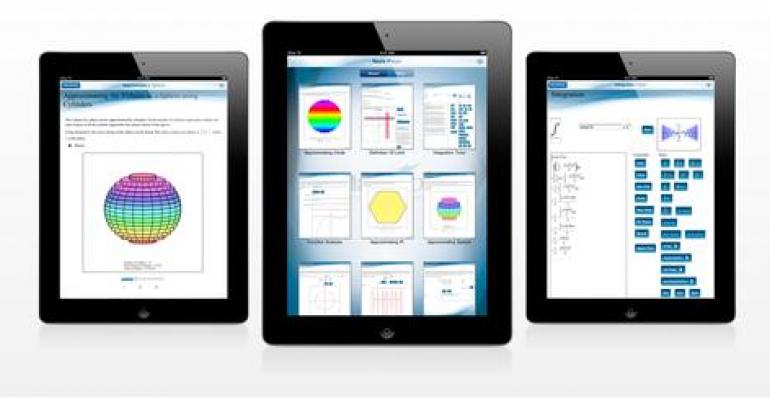 Maplesoft is testing the mobile waters with a release of its Maple mathematical computational software for the Apple iPad, this first release aimed at students.

The Maple Player for iPad, which Maplesoft is pitching as tool for "livening up a classroom or for providing additional insight to students outside of class," brings the Maple computation engine to the tablet platform, allowing users to engage the interactive user interface to delve deeper into their equations.

The app, available for free in the Apple apps store, lets users enter values, move sliders, and click buttons to perform calculations and visualize the results. Maplesoft is stocking the app with a collection of interactive calculators and conceptual explorations, the idea being that the iPad's immersive UI lets students more readily explore mathematical objects using finger swipes and gestures. "Using the finger to explore as opposed to having to work with a keyboard as an intermediary works well for math," Laurent Bernadin, Maplesoft's chief scientist and executive vice president, told Design News.

Additionally, the iPad provides a better way for students to explore concepts outside of the classroom, for example, using the graphical capabilities to display illustrations that approximate the volume of a cylinder or other mathematical concepts.

The app is aimed initially at the education market because Maplesoft sees the tablet's potential for exploring math, while acknowledging the younger generation's surging appetite for engineering tools that take advantage of the unique features of the mobile platform, Bernadin said.

"Every single one of this generation has a phone, and [mobile devices] are a part of their life," he said. "Apple has struck a chord with this device, and they have more of a need to have apps that are important to them available on their device of choice."

While the Apple apps store is flush with apps of every variety, professional engineering tools are not as plentiful. There remains a lot of skepticism among the older, less tech-savvy crowd, on how graphics-intensive, feature-rich design tools will translate to this small-scale platform.

While Maplesoft is beginning its app thrust with the education market, it believes the professional engineering segment will be open to mobile tools over time. "We haven't seen much pushback from the older generation," Bernadin said. "They're fully on board with these new platforms."