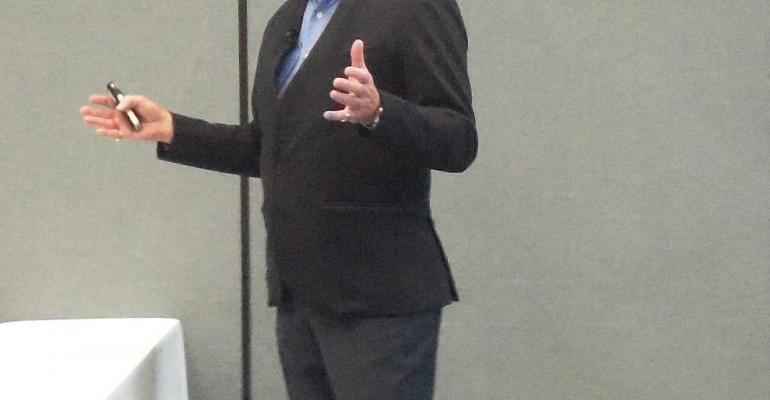 Bryce Rutter, founder and CEO of Metaphase Design Group, Inc., said that well-designed products – from beer cans to medical instruments to handheld consumer devices – all share the same attributes. “Good products speak to you through more than one sense,” he told an audience of engineers and designers. “They have the right sound, they look fantastic, and when you put them in your hand, they just fit.”

Moreover, the operation of well-designed devices shouldn’t be a mystery to the user, Rutter said. “If it’s not simple, if it’s not intuitive and if it doesn’t fit, then it doesn’t sell,” he said. “Sure, you may sell a few, but your brand reputation takes a dive.”

The key for product designers is to adopt a user-centered process, Rutter said during a session titled, “Your Next Breakthrough Product.” He identified five overarching principles, all of which are part of that process.

Watching and listening to consumers is fundamental, Rutter said. Unfortunately, most designers won’t admit that they don’t do that.

It’s critical because it opens a window to the consumer’s ticks, behaviors and unarticulated needs. And that, he said, is where the “juice” of innovation really lies.

“It’s important to observe where they struggle and where they slow down,” he said. “It’s also important to ask them how they feel, because that’s a component of the emotional baggage that they bring to the experience.”

Rutter, who has helped design scores of medical products, often asks designers if they attend surgeries to help them better understand the user’s travails. Few do, he said.

“Most really don’t go to the point of sweat as routinely as they should for each new development program,” he said.

Good products are designed for how we’re built, Rutter said.

“To a large extent, the job of the designer is taming the technology – humanizing it,” Rutter told the audience. “That way, the user can have 100% access to the potency of it.”

The key is to understand how the brain talks to the muscles, he said. The shape, the weight and the center of mass of a device enable the brain and the hand to use it optimally or sub-optimally.

“Human factors should shape the strategy of any design program,” Rutter said. “If it doesn’t work, it doesn’t matter how beautiful it is or how wild the technology is.”

Product design can be maddeningly complex at times, but the job of the designer is always to find the most intuitive solution.

“When you see a great design, you look at it and say, ‘Well, that’s obvious. It’s so simple,’” Rutter said.

One way to get there is to relax some of the constraints and ask, “What if?” Rutter added. Doing so engages your creativity and allows you to approach a problem from a different direction – what Rutter calls “lateral thinking.”

“It’s a potent way to go through and search out different ideas, instead of falling in love with one certain direction early on,” he said. “That’s what you’re in search of – where does everything work well together?”

Doing so enables the designer to test ideas and quickly eliminate those that don’t work. Rutter provided examples, showing how physical prototypes enabled medical designers to build instruments that offered better dexterity and control to users. He also showed how the approach later enabled designers to shrink those same medical instruments.

Consumers can sense the details, whether or not they are conscious of them, Rutter said.

He cited examples of products featuring details that communicate varying messages to the users. Laptop computers, for examples, use plastic, aluminum and steel to create brushed, satin and slick surface finishes. All of those finishes communicate different qualities, ranging from cheap to expensive to sophisticated.  Different colors similarly convey different qualities and emotions, he said.

“There’s an emotion that’s important to pay attention to, whether you’re designing a surgical instrument, a bulldozer cab, or a race car foot pedal,” he said.

The bottom line is that seemingly-insignificant features can have profound effects. “You have to fuss over the details,” Rutter said.

Driving the Future of Automotive Design. Federal mandates and environmental concerns have put fuel efficiency on the map for 2025. The automotive conference, held during Advanced Design & Manufacturing , March 29-30, 2017, in Cleveland, investigates lightweighting, the art and science that is lifting the pressure off automotive manufacturers. Learn about this trend's future and find out how new advances in lightweighting parts and materials can help you deliver the cars of the future. Register today!
TAGS: Medical
0 comments
Hide comments
Related