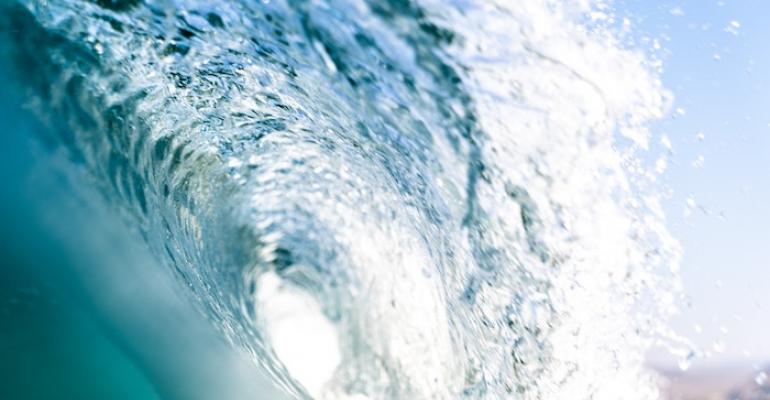 Industry 4.0 and 5G are bringing a flood of data that will wash over the cloud. A panel of experts offer solutions and cautions.

- “The big challenges will be … security, information overload, and putting intelligence where its most needed.” - Chris Cheng, Distinguished Technologist, HP Enterprise

- “Should we consider the “design of data” (or data driven design) as something equal in importance to the “design of devices?” – John Blyler, Senior Editor, Design News

- “It’s analogous to treating every single camera as an eye of a single brain.” - George Szabo, co-founder and CEO with AIXIA Global

-- “5G has many challenges…. It will create a shield over the spectrum that is being used by … satellites (and the military).” Zaheer Ali, Manager, USRA SOFIA and co-founder of AIXIA Global

-- “This will be the challenge for us – as designers - to anticipate the hardware architecture (for differing 5G applications).” - Chris Cheng, Distinguished Technologist, HP Enterprise

Device design has driven and enabled Industry 4.0, from shrinking the size of sensors and transceivers to enabling the use of different frequencies and lowered power consumption. How will continued advances in device design alter the current revolution in robotics, automation, and the collection and use of data itself? Keynoter Zaheer Ali, manager on USRA/NASA’s SOFIA program, George Szabo, co-founder and CEO with AIXIA Global and Chris Chen, HP Enterprise’s Distinguished Technologist, gathered with moderator John Blyler, Senior Editor at Design News, to discuss the impact devices have on industry and peer into the future to predict where this might lead us. What follows is a portion of that conversation.

Design News: Welcome, all. Let’s get started. What are the challenges facing users and designers of devices in an Industry 4.0 world?

Zaheer Ali: In 2019, the average person's interaction with IoT devices was 1.5-ish times per day. By 2025, it will be 10 times as much. That’s an order of magnitude difference in how often the average person will interact with devices on a day to day basis. That means that devices are going to be used for a far greater variety of things and will release tremendous amounts of data. So, when I think about device design and Industry 4.0, it's really about how are we going to integrate all of these devices into our lives – the human and machine interactions - in the next 25 years.

George Szabo: At this conference, I hear a lot about the mechanical execution of board and circuitry and all these things. What I think we need to also consider it the real ramification of this technology for our lives. That's why the design of devices, both in the way the tech is executed and marketed, is a very critical point for us to understand and to communicate to designers and users.

Chris Cheng: There are really three issues that should be addressed for the industry 4.0 generation. The first issue is security, the second the amount of information being generated and the third is how can we move intelligence closer to the edge. Did you know that a typical autonomous car generates about one terabyte of data per car per day? That’s a tremendous amount of information and data to consume. Do you push all that data to the cloud or process it on the edge to minimize traffic? The amount of data that can be handled at the sensor is also important. All of this processing will require a lot of customized hardware beyond a typical processor. And all of this processed data and information will be floating around on unprotected devices, so security will also be a big concern.

Design News: Let’s move on to the question and answer session. Each of you have mentioned the increasing amount of data being generated by sensors and devices in this IoT era. Should we consider the “design of data” (or data driven design) as something equal in importance to the “design of devices?”

Zaheer Ali: We're going to reach the limit of what we can handle pretty soon as the amount of data and information becomes overwhelming. We’ll need to get smarter about what information we collect. How can device design help us? One way would be designing better sensors that give you direct measurements of what you're actually interested in. This would significantly help to streamline the amount of data coming in, which has become not a fire hose or deluge but a tsunami of data.

George Szabo: I don't think that the storage of the data is going to be a problem. I believe that we will continue to grow the ability to store and house massive amounts of data. What we need to do is intelligently identify actionable things inside of that data as it's collected. Consider video data in which we want to identify a person or thing. How much on the fly processing can we do especially if we also need to go back and look at prior data. We don't want to look at all of the video but only the part we need. For example, I want to find such and such a person from hundreds of cameras at this facility and that person’s movements from point A to Z. That action right there requires not only the ability to index each digital feed coming in but to connect them. It’s analogous to treating every single camera as an eye of a single brain.

Chris Cheng: Let’s focus on actions on the edge, which is more applicable to Industry 4.0. In terms of memory and information structure, the edge is a place where storage cost will be at a premium. The means that we’ll likely have tiered structures. There’s a growing trend right now known as storage across memory which handles high demand data in high-performance applications. Our experience is that, when you tier the data, roughly 90% of all your activity is handled by 10% of the data available. So any intelligent caching of data at the edge would be very critical because this is where processing and cost will be very premium. Basically, you want to use different devices on different levels of storage to handle high data demand. But with intelligent caching you can handle these kinds of data very efficiently at the edge for the industrial applications. For us, this is the current trend for data management.

John Blyler: As a quick follow up to my previous question, all of the big social media firms – Facebook, Apple, Amazon and Google (FAAG) – are not only doing data mining and data design but also designing their own devices. It might be interesting to see what their data and device design practices look like. Now, let’s move on to the next question. How will device design be affected by emerging 5G technology? Or asking just the opposite question: How will 5G effect the kind of devices that we're looking for?

Zaheer Ali: 5G has many challenges that are not being well discussed. Lots of LANSats and other satellites will have problems because 5G will be broadcasting and creating a shield over the spectrum over which they are trying to image the earth or weather. While that touted capability – speed and bandwidth – has great promise, there are many practical use applications in the US and Europe that will cause problems.

George Szabo: At first, architecture for 5G is going to be rough. Governance is going to have to come in to help. It's going to force people to respect the bandwidth, whether it's through cost in terms of how much they charge for access to it, et cetera. I think there's a lot of positive things from 5G but there will be a lot of challenges that regulation will have to deal with.

Chris Cheng: The challenge will be how do you handle the data and structure. One of the promising features with 5G will be the very low latency and the very high bandwidth. In particular, there will be low latency between the edge and the enterprise tier. So where will we put the data? This ties in with another question: What will be the killer application for 5G, i.e., streaming movies, autonomous cars or something else? Answering that question is important as there will be different requirements and data structure for different applications. This will be the challenge for us – as designers - to anticipate the architecture regarding the hardware, the server, etc.