5 Killer Reasons the Apple Watch Is Just Getting Started

Apple’s latest watchOS update, which is set to be released this fall, will finally usher in an era of killer apps for the Apple Watch.

As Apple continues to remain mum on actual Apple Watch shipments, speculation around the success of this device continues to rise. But for every report which suggests that Apple Watch is a flop, there are reports and surveys which suggest the complete opposite. In fact, according to independent research firm, Strategy Analytics, the Apple Watch is a hit. Strategy Analytics' recent analysis of the smartwatch space positions Apple Watch as the top performer, estimating it has captured 75% of the smartwatch market share. And according to Apple Watch research platform Wristly, Apple Watch customer satisfaction is through the roof — with 97% of users surveyed somewhat or extremely satisfied with the device.

One of the keys to the Apple Watch's success is this notion of the “killer app”— that one thing users can point to as the reason why they must have this device on their wrists. But, like the smartphone, there won’t be one single killer app for the Apple Watch but rather a variety of use cases which will resonate with different people in various ways. Right now Apple Watch apps are extremely rudimentary due to the limitations of the software, but Apple’s latest watchOS update, which is set to be released this fall, will change everything.

watchOS 2 equips developers with access to essential components which will set Apple Watch apps apart from their smartphone counterparts by using sensors, watchface complications, and the glanceable nature unique to the watch. This next version of the operating system also allows Apple Watch apps to run natively, freeing them from dependence on the smartphone, which will optimize their performance and allow users to do more things without relying on their phones. 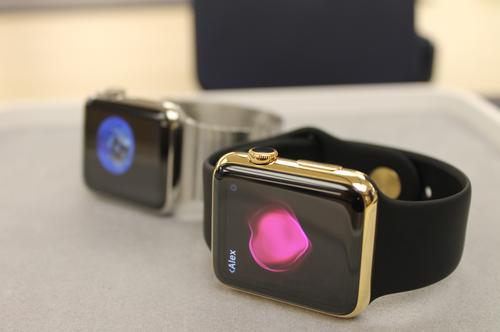 MORE FROM DESIGN NEWS: It's Time for the Apple Watch Teardown

As the app ecosystem grows for Apple Watch, users will be able to customize their Apple Watches to fit their unique lifestyles in the same way they have personalized their iPhones to be the most important life tools. That being said, there are already a couple of use cases for the watch taking shape that have the potential of becoming more universal killer apps for the device.

The first of these killer apps for Apple Watch is its ability to save users time. We spend an enormous amount of time on our smartphones, mainly because they offer a seemingly infinite amount of opportunities for us to engage with them. When a user receives a notification on a smartphone, he or she usually checks it and then becomes engaged with social media apps, news apps, and other content before finally putting the phone away.

Unlike the smartphone, which wants you to continue to use it after you are done, Apple Watch aims to get you what you need and then get you off the device so that you can return to the life around you. It offers a finite experience. Once you’ve checked the notification on Apple Watch, there is nothing more to do. Interactions are short, are glanceable, and provide information immediately.

2.) Paying With Your Wrist

Paying with your wrist is another killer app for Apple. Currently Apple Pay is only available in the US and the UK. But as this mobile form of payment rolls out to more and more geographic locations, payments will become increasingly key for Apple Watch. Payment makes sense with a wearable because of convenience and security. Users will find convenience in paying with a device that is always available, doing away with fumbling to get their phones or wallets out of their pockets. They will also benefit from the use of biometric authentication to assist in secure payments.

Biometrics is also critical to another key use case for Apple Watch, especially in terms of fitness and health. Apple Watch’s sensors, including the accelerometer and heart rate monitor, are already being used to turn Apple Watch into a fitness companion through Apple's Activity and Health apps. And, as Apple opens up access to these sensors to third-party app developers, we are sure to see many other apps make the watch an essential fitness and health tool. We are already seeing app makers plan to use Apple Watch as a coach to help users improve their golf swings and basketball shots and as a monitoring tool for seizures in people with epilepsy. We are also seeing wearable devices that do not have screens of their own leverage the Apple Watch's screen to display data points and communicate with users.

MORE FROM DESIGN NEWS: Moving Beyond Step Counting: the Versatility of the Accelerometer

Introducing a new way to communicate to users and for users to communicate to each other is perhaps one of the most exciting opportunities with Apple Watch through the use of its Taptic Engine. Haptic feedback is not new to mobile devices. The iPhone makes use of this vibrational motor when you put your phone on silent. What is key with the Apple Watch is the fact that this haptic engine has persistent access to your wrist. Apple makes use of this haptic feedback by varying the intensity and pattern for various notifications on the watch. But it employs it in an extremely new and unique way in its Digital Touch, which allows users to send heartbeats, taps, and other Morse-code-like messages to one another. The Taptic Engine presents a new way for developers to communicate to their users without asking them to look at a screen. It also introduces a new sense to our technological interactions: touch, which can lend itself to a more emotional and personal connection with the app.

Ultimately, the real killer app for Apple Watch is its ability to allow developers to create killer apps. The wearable’s capability of supporting third-party applications which are available to users to download from the App Store is what will allow Apple Watch to succeed, and this next update to the operating system is finally equipping developers with the tools they need to create meaningful experiences with the device. So regardless of the many surveys, reports, and forecasts floating around both for and against the Apple Watch, the fall watchOS release is really when it's game on for Apple.