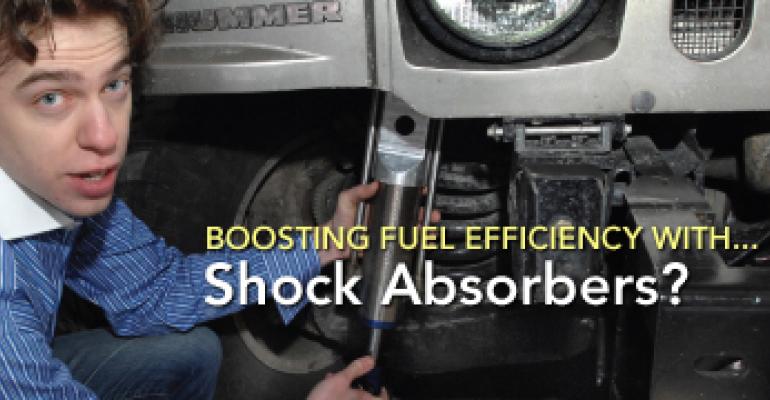 Shakeel Avadhany was driving his car over some reflectors atop an asphalt road in 2007, when an unlikely thought crossed his mind. "I turned to my friend and said, 'Wouldn't it be cool if we could generate power from the suspension by going over these bumps?'" he recalls.

Cool indeed. Avadhany's off-hand comment launched a discussion among his friends, all of whom happened to be engineering students at Massachusetts Institute of Technology (MIT). As it turned out, the group had already been looking for ways to scavenge unused energy from vehicles, and this one seemed an especially strong candidate. After a few "back-of-the-envelope calculations," the idea grew, and then reached a level of near-obsession among the students.

Today, that obsession has led to the creation of a company, Levant Power Corp., which makes a prototype shock absorber that enables heavy vehicles to boost fuel efficiency by as much as 10 percent, simply by recovering the energy generated from bumps in the road. AM General, the Indiana-based maker of the Hummer, is taking a hard look at applying the technology in its next-generation military assault vehicles. Honda, Bentley Motors, General Motors and a few unnamed heavy truck manufacturers are also talking with Levant.

Levant engineers describe their product as an industry first. "Instead of providing damping to the suspension and burning it as heat, we provide the same damping and then we sap the energy from the spring as electric power instead of heat," says Avadhany, who now serves as the chief executive officer of Levant. "It's just a smarter thing to do, especially considering the new pain point of fuel prices."

Levant's journey into the world of energy scavenging began after three of the students decided to push themselves beyond the theory of textbooks and into the world of product creation. Their goal was to find a way to recover some of the energy that's wasted by today's typical automobile. According to some estimates, only about 15 percent of the volume of a gas tank is used to propel a car forward. The remainder of the energy is lost as heat through internal combustion engines, as well as in air drag, driveline friction and rolling resistance.

"We asked, 'Out of all the places where we are losing this energy, where can we recover it?'" Avadhany says. Their investigation then took them into an examination of engine blocks and brake systems, without success. Finally, they rolled over the aforementioned road reflectors and an idea was born.

Then their analysis hit second gear. A quick search of patent records revealed there was little in the way of energy-scavenging shock absorbers. Using some funds borrowed from Avadhany's father, they rented some cars, outfitting the suspensions with sensors and calculating the potential for energy recovery.

"It's like plugging into a wall socket," Avadhany says.

The trick, however, was to find a way to harvest all that energy. Over time, they settled on a hydraulic system that serves as both a shock absorber and an energy-recovery device. To make such a system, they added a manifold, hydraulic motor, generator, check valves and an external hydraulic circuit to the piston-type shock absorber. The shock absorber, known as GenShock, reroutes fluid through the external circuit as it compresses and relaxes. The check valves allow the hydraulic fluid to travel in only one direction, thus forcing it to the outside circuit and enabling it to power the hydraulic motor that's coupled to the generator.

"This is the industry's first shock absorber to convert the vertical motion of the vehicle to the rotary motion of a custom-designed hydraulic pump," Avadhany says. "It's the result of a bunch of iterative design schemes we created on paper and we think this is the best way to recover the energy."

To optimize its choice of fluid power components and to minimize the size of the fluid power circuit, Levant says it is teaming with fluid power equipment giant Parker Hannifin Corp. Currently, Levant engineers are considering the use of gear motors, gerotor motors and vane pumps for the production version of the GenShock system. Parker Hannifin officials acknowledge they are working with Levant, but as yet are declining to offer any details on the pending design. Whichever hydraulic motor is chosen, the system will generate electrical current and use it to recharge vehicle batteries.

To do that, however, Levant engineers have had to take pains to ensure all current from the generator is usable by the vehicle's battery. They've accomplished that by employing boost converters and voltage regulators.

"The shock absorber produces spikes of high energy," says Zack Anderson, chief operating officer and electronics designer of the GenShock. "Dumping that into the car battery can be tough on the battery, so you have to do filtering to take out the intermittent spikes." ?The filtering, he says, provides a steady stream of clean, 12-V current coming to the battery.

Along with the energy recovery system, Levant engineers have also endowed the GenShock with the ability to provide active damping to a vehicle's suspension system. The company's engineers accomplish that by employing sensors, a microcontroller and proprietary software algorithms to determine the position of the shock's piston, as well as its velocity. By knowing the position and taking advantage of back-electromotive force (back EMF) from the generator, Levant is able to dynamically adjust the damping characteristics of the shock. As a result, damping can be stiffened or relaxed, depending upon the weight or sensitivity of the load.

Levant says its studies show that if installed in a heavy truck with six shock absorbers, each GenShock will generate approximately 1 kW as the vehicle passes over the bumps in a standard road. Plans are for the shock absorbers to recharge vehicle batteries and run accessories, such as hybrid trailer refrigeration units.

AM General is currently considering the GenShock as a vehicle feature to help the company secure an expected $40 billion contract for the Joint Light Tactical Vehicle. Expectations are that the GenShock could help vehicles reduce fuel consumption by up to 10 percent, which would, in turn, reduce the frequency of fuel runs in battle. Levant is also targeting Class-8 trucks, where it estimates the GenShock could boost fuel economy by 3 to 5 percent, and is focusing on container cars, all-terrain vehicles and hybrid cars.

Assuming that over-the-road trucks travel 100,000 miles per year, Levant engineers say their shock absorber would pay for itself in two years. "This is a value-added device," Anderson says. "After those first two years, it's saving money for the owners, year after year."

The start-up company is apparently optimistic about its chances of success. Its employment ranks have recently grown to six full-time and three part-time engineers.

"We're thinking big," says Anderson. "The key is to get customers to say, 'This is something we want on a vehicle.'"