To meet consumer demands around connected vehicles and IoT, automakers like Ford are turning to startups. But where should the focus lie for companies looking to work with the car giant?

We're more than 20 years removed from the dot-com era but with so much interest and investment happening toward creating connected vehicles are we now entering a "dot-car" era?

This was the question Jeffrey Hannah, the North American director at SBD, posed to his fellow panelist at IoT World 2016. In a panel titled, "The Competing Visions on the Future of the Connected Car," Hannah along with Patrick Ellis, manger of connected vehicle research at Ford Motor Co., and Dave Kaminski, the director of Ford's Research & Innovation Center in Palo Alto, Calif., talked about the current state of connected cars - particularly Ford's outlook, which involves new ventures and partnering with startups when possible. 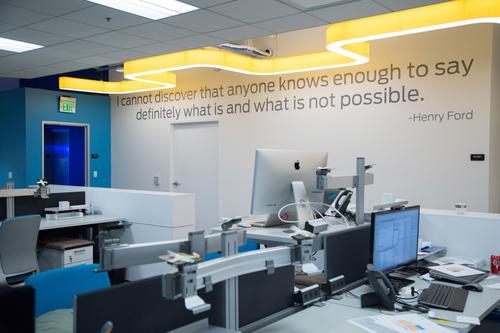 Ford's new subsidiary, Ford Smart Mobility, is meant to function like a startup but is also looking to work and partner with startups on creating technologies for connected vehicles.
(Image source: Ford Motor Co.)

Ford's new Smart Mobility wing is meant to function like a startup, more nimble than Ford and able to address the rapidly evolving challenges around connected vehicles, both on its own and by collaborating with other tech companies, including startups.

"Automakers can't do it alone and are going to need partners," Hannah said. Asked about Ford's criteria for looking at startups to partner with, Kaminski said that in addition to things like funding status, background, education, and past successes and partnerships, uniqueness of technology was a primary factor. Ellis also said that Ford is aware of and works with several startup incubators - including StartX, SkyDeck, and Highway1, among others. Kaminski added that any startups interested in working with Ford are free to engage them at conferences and meet-ups, as well as contact them via their website (Research.Ford.com).

Ellis said that Ford sees working with startups as a mutually beneficial arrangement. Larger companies like Ford get access to new, innovative technologies, while startups benefit from Ford's infrastructure. "Everyone in Silicon Valley is an entrepreneur, everyone has an idea they think is great and can develop and change the world. Which is great - it's motivation, it's passion, which is something that you just can't buy," Ellis said. "Most of the startups are removed from the traditional OEMs or the Tier 1 suppliers and that's really one of the things that gives us a brand new scope of opportunity. Instead of the traditional methods that we use to either learn about a technology or start developing it, we're actually going Tier 2 or lower right in the beginning." It's in this space where Ellis said Ford is really finding opportunties to partner with and potentially invest in startups.

But how do you balance all of these products and ideas coming in? And how do you get them to work together efficiently? With so many technologies out there and even more looking to get into the market, the conversation eventually shifted to standardization. Kaminski said that standards will not only help streamline projects but also facilitate more collaborative environments for suppliers and OEMs. Ellis pointed to SmartDeviceLink (SDL) as an example. Ford uses the open-source SDL platform for its AppLink product. "The SDL is a great example of a standard that benefits everyone involved, whether that's the auto manufacturer, the developer, or the consumers themselves," Ellis said. "With Toyota adopting it as well as Mazda and others considering it, it's showing that there is definitely room for standards whether they come out of one company or as a consortium. ...The key is showing value for the manufacturers and helping them focus on the things that are going to differential them in future."

So, in regards to all of this differentiation, which horse should developers bet on? For the folks at Ford the answer isn't as simple as picking one winner. Ellis said the automobile is rapidly becoming a product as diverse as a smartphone - offering a lot of different potential uses and functionalities that customers can then choose from. "For us it's about consumer choice," Ellis said. "Not everybody has the same requirements; not everybody wants the same thing within their car, or wants the same thing in their car...[When] you compare what you can do with Spotify, with AppLink, to what you can do with [Apple] CarPlay, and they're worlds apart."

For Ellis, ultimately, it will be consumers that decide what goes into their connected vehicles, but it will be the startups and smaller companies that help big automakers like Ford deliver on these products. "Really, it's about providing differentiated experiences and giving consumers the choice to have the experience that they want."